Weekend mornings are ideal to do an early morning bird count. I love to sit and have breakfast at the window watching the early frantic dashes through the garden by the visiting birds. I especially like to do this as light comes up. Today I did a count for no other reason than I hadn’t done one in a while. I took my count between 7.45 – 8.45am. 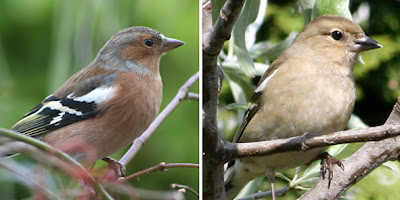 Top of the leader board today was, once again, the Chaffinch with 9. During my count I saw five males (left above) and three females (right above). Later on during the day I saw many more. 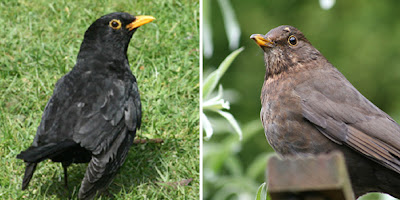 Second place was the Blackbird with 8. During my count I saw one partial albino male, four males (left above) and four females (right above). I love to see and hear the Blackbirds in the morning. They really do make the garden come alive.

Third place went to the siskin with 7. During my count today I saw two males (left above) but later in the day I saw five. I saw five females (centre above) and there were probably eight later on in the day. I saw four Goldfinches (right above) and I may have seen one more later.

Two male House Sparrows (left above) were seen and one female. Two Greenfinches and two Blue Tits were also seen. On other days I have noticed four Blue Tits in the garden and I know more have visited as I have seen different birds in our Camera Nestbox.

Finally with a count of one, from left to right above, is the Robin, Dunnock and Female Blackcap. Now this was interesting to see the female Blackcap still with us as I haven’t noticed her recently. However, just before I began my count I filled up some of the feeders and put some apples on my obelisk. Guess where I spotted the Blackcap – yes, at the apples once again!

Bird counts are always interesting to do and look back on. I have never had a Blackcap in my garden for so long. I am always expecting that it will leave soon as no males have been seen and I have never seen them in my garden during Spring and Summer. They are new visitors appearing for the first time in January 2007 and then again for a brief visit in February 2007.

Collared doves, I have been told, usually visit in groups but I only ocassionally see one. However today, true to form after a bird count is over, along came one then another! A Song Thrush was also spotted on the branches of an over looking tree but as I didn’t see it on my trees, feeders or on the ground it wasn’t included in my count.

Birds do look out for the feeders being filled up and one such bird is the Jackdaw. Today, once the birds started buzzing around the garden from feeder to feeder it flew to the roof of my house. It then took a fly-by past a particular feeder that I will put a few odd peanuts on. No joy for him today as I had run out! So he wasn’t included in the count either. I have noticed the Great Tits appear when the peanuts are put out too but as I don’t want to attract the squirrels I don’t put out many and not on a regular basis either. I enjoyed my count this morning and looked forward to garden walkabout to look at the plants later.