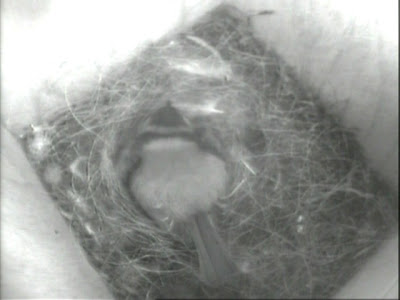 Our Camera Nestbox now has seven blue tit eggs in it! I am wondering now if perhaps tomorrow morning could see the last egg being laid. Why? Well, the female has been sitting for spells in the nest a lot during the last couple of days and I suspect she has started to incubate her eggs. The photo below shows her earlier this evening and you can see how far into the nest cup she now sits.

Once egg laying starts it definitely does not mean that nest building is over. As the eggs are laid she continues to bring in feathers and other soft material to cover them up and then as she sits in the nest cup she pulls the material towards her and in doing so makes the cup much deeper and more defined.

I really do know how lucky we have been to see eggs laid in our Nestbox once again this year. Some nests are abandoned even after an egg or two has been laid! The pupils of Pennington County Infant School in Hampshire, England who took part with a Nestbox diary for The Birdbox Project 2008 have discovered this for themselves. I live in Scotland so how do I did I hear about their Nestbox?

Searching for images is a great way to discover new websites. I was searching for blue tit eggs to find out exactly how big (or small) they actually were as they sat in the nest I am watching now. I very quickly found the perfect image on a diary entry from Pennington County Infant School. They were able to measure the abandoned egg that was left in their Nestbox but I’m quite sure that they would much rather have watched it hatch! 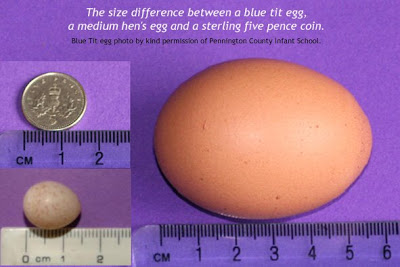 After contacting the class they kindly gave me permission to use this photo. I would like to thank them once again as I have cropped and used it to make a montage that shows a size comparison between the blue tit egg and a medium hen’s egg. I also discovered that this egg is smaller than a five pence piece – now that puts it into perspective!

Now that I had this image, after a bit of juggling with photo sizes, I also used it to make another montage that shows the approximate size of the nest cup in my nest at the moment too. I found that very interesting and I hope the pupils at Pennington do too. 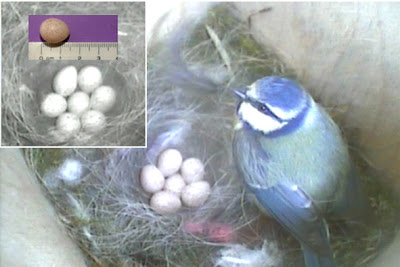 I also hope that I can share more Nestbox footage with these pupils too and that next year they get to experience this for themselves in their own Nestbox. I think it is wonderful that some school children are getting this fantastic opportunity to see nature so closely.

Finally, I cannot leave this post without sharing one more size comparison with eggs. Recently I discovered a news item on the BBC News Website reading: Chicken lays super-sized egg where ‘Chicken owners David and Julie Hewitt have spoken of their surprise at finding an egg the size of a tennis ball on their farm in Cornwall.’ Wow, what a shock that must have been for the hen too! 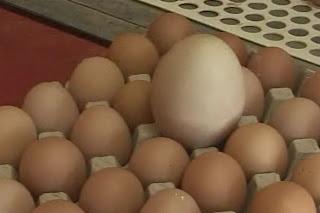 Thanks once again to Pennington County Infant School for allowing the use of their blue tit egg measurement photo. The photo of the oversized egg was cropped from the video on the BBC News.