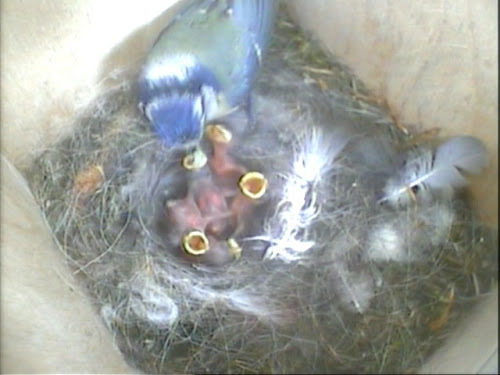 Time is passing slowly as we watch the chicks in our camera Nestbox. It is tricky to see how many are in the nest. We had eight eggs. I am guessing they have all hatched as I cannot see any left. I am also guessing perhaps they have not all made it. I can see the mouths open from five chicks although three/four seem to be bigger. I can also see that the chicks are weak as they don’t jump up frantically when the female comes in with food as they should.

The female blue tit isn’t finding much food for her chicks. I can see that, like last year, she is bringing sunflower hearts in – they can choke the chicks! I have hidden tiny fat sprinkles in a feeder in a bush where she looks (as recommended by the RSPB) and live mini mealworms in a feeder on the ground behind a pot where she also looks.

She just has to find them very soon or a new supply of insects and bugs – the greenfly on my roses for example. Caterpillars of course would be best but they aren’t going in the box. I don’t know what she fed them in the photo above but it wasn’t an insect. She nearly choked one of them but realised in time and pulled the piece of ‘hard’ food out. 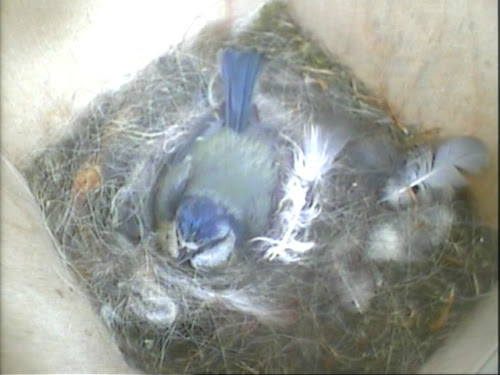 She is still sitting on her chicks to keep them warm but I if I were to make an estimate on the outcome at this stage I’d say unless she finds the greenfly on my roses or the mealworms I have put out the chicks will all be gone by Sunday night. I am not enjoying looking in on the Nestbox now but this is the reality of nature. I have had mail from many people telling me that intruders have taken chicks from nests too and this is also the harsh reality of nesting birds.

However, I am also hearing of many success stories from other Nestboxes too. I have enjoyed following Jamie’s Nestbox and this week saw his brood finally fledge – eventually!! He has some great images there if you want to see how the story can turn out. Enjoy looking at his videos! They are great fun as well as a great insight.

Evening Update: Argh… the starlings found my tiny suet sprinkles in a feeder hidden in a bush! Ah… but maybe this time they have helped! I am delighted to add here that the female blue tit has now found the sprinkles too and has been bringing them into the chicks who seem to have more energy now! So does she. I can now confirm that at this moment there are six chicks with one being a little smaller.

Tonight, I have been watching the female bring bugs in too. So I would say things are improving again. It is still early days with fours chicks only five days old and the other two younger. I am also very grateful to a local RSPB volunteer for lending me a feeder that I have been able to put the mealworms in which the starlings really are not likely to get in. Although perhaps we need a great tit or coal tit to come along and show her how to get in this feeder.

Also, I have now taken another approach with starlings. I am feeding them fat balls (which they love) away from the feeders that the blue tit is going to. For the moment this seems to be working fairly well. Today has seen a breakthrough in food coming in to the chicks and if this keeps up tomorrow we could see a big difference in the size and strength of the chicks.

The photos above were taken in my camera Nestbox on May 30th 2008.

4 thoughts on “Please find the greenfly”