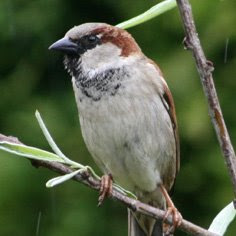 For anyone, from the record breaking over half a million people from the UK, who took part with the RSPB Big Garden Birdwatch in January 2009 the results are now out. I am guessing these lists may be of interest to others in Europe and other parts of the world too. Below I have listed this year’s Top Ten with comparison figures for 2008 and 2007. You can also see my Top Ten visiting garden birds in 2009 and 2008.

The House Sparrow takes the top spot once again so I have used the same photo as last year. The rest of the top ten is pretty much the same as last year with a little shuffle around plus the new entry at number ten. Looking back to the last two years number ten looks like it’s the spot to watch!

I guess I’m not too surprised that the Long-tailed tits just made it into the top ten after seeing visits in my garden for the very first time this year and hearing of them in other gardens too. They were such wonderful visitors to see. However the RSPB say: “This highly sociable species increased by an astonishing 88% from last years count.”

Now that is interesting but here’s another thought. The RSPB say: “We believe this pleasant increase is because this insect-eating bird has adapted to feeding on seeds and peanuts at birdtables and from hanging feeders. This result highlights perfectly the positive impact that our feeding and bird care can have on some birds.” 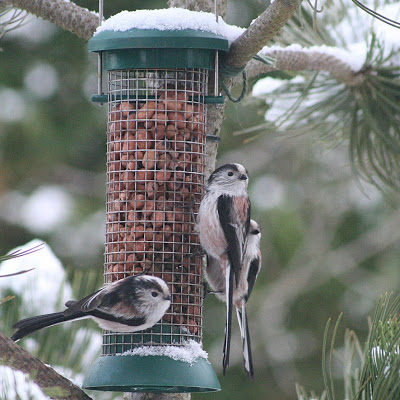 The RSPB also say: “Thanks to the cold snap in January, some birds came into our gardens from the wider countryside. The two species of winter thrushes, redwing and fieldfare, were found in three times as many gardens as previous years. During the Birdwatch, many people often notice groups of these beautiful thrushes flying overhead, but this year, with all that ice and snow about, they were hungry and small groups came in to our gardens, joining the blackbirds munching on apples and other food we put out.”

Once again, I would agree with that as my garden had visits from the Mistle Thrush and a small group of Fieldfares. They did give me a challenge trying to identify them on dark mornings. Again new first time visitors there too! You can see the differences in my montage below. Left to right is the Song Thrush, Mistle Thrush and the Fieldfare. 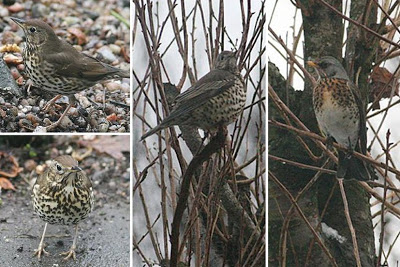 So… what about the next ten? Again, many familiar faces to my small Scottish garden with the exception of the Feral pigeon. The others have all visited although the Magpie has just looked down from a neighbour’s tree. Oh… but I just had to smile when I saw who made it to number twenty one!

The Pheasant took the 21st spot and once again it has made it to my garden too. So strange to see… but I have seen it take a stroll up my lawn. Silly thing, missed all the food on the ground quite close to where it walked! Here’s numbers 11-20…

Okay, so if you’re still hungry for more stats I’ll give you a couple of more links. There are PDF files for the 74 different species seen during this year’s Big Garden Birdwatch but perhaps you’d like to see the list for your local patch. I remember last year many enjoyed browsing the later.

I wonder if you’ve seen lots of interesting bird activity in your garden over the weekend? I hope so. I spotted some moss loose at the edge of my ‘mossy’ lawn so I guess there are some birds looking for nesting material at the moment. Now, I wonder what tales will come from the Nestboxes this year. It really is fascinating to watch. Enjoy watching the birds in your garden.

The photo of Long-tailed tit shown above was taken in my garden during February 2009.