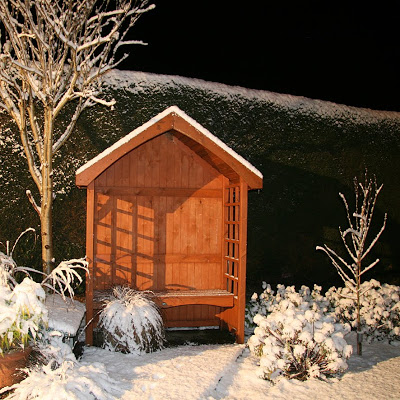 Yesterday’s green tips of the snowdrop’s cousin ‘snowflakes’ are well hidden tonight. They have been covered by… the real cold and wet stuff! Yep… today saw our first covering of snow.

Arbour with Rowan tree on left and new Hawthorn on the right.

Some night time pics again… I didn’t get out with my camera during the day. However I couldn’t lose a photo opportunity of this nice crisp snow that is beginning to thaw a little. The outside lights went on and my camera went on my tripod. 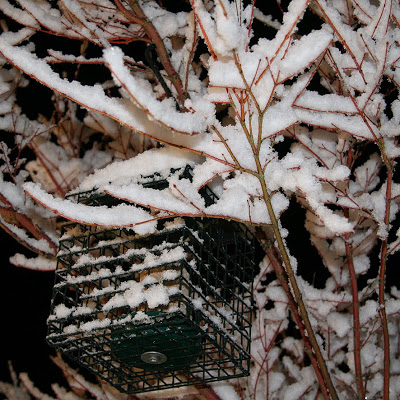 Fatcake in bird feeder hanging from a hook on Acer palmatum Sango Kaku.
This Coral bark maple is brilliant at this time of year.
The tree and its feeder is likely to be very popular tomorrow!

I’ll not chat on too much. The weekend is almost here and everyone will be very busy just now with Christmas so close. I’ll just take you a quick walk around my garden and then into my kitchen… someone was busy, busy in there when I was outside with my camera just before 11pm tonight. 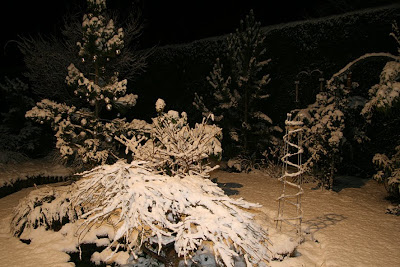 View from back door. I’m thrilled with the silver baubles on my pine tree.
This is exactly how I hoped I’d see them. 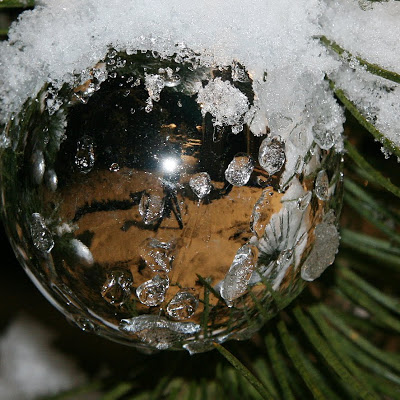 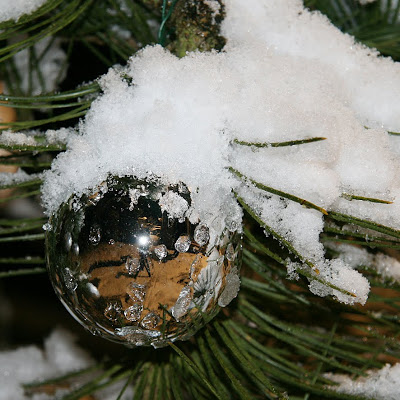 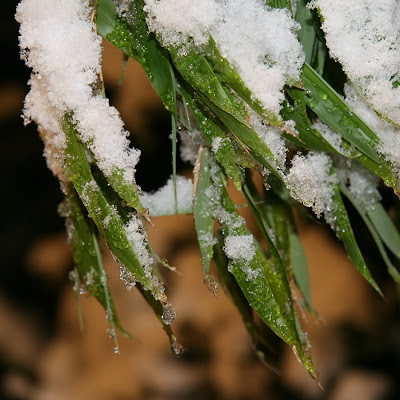 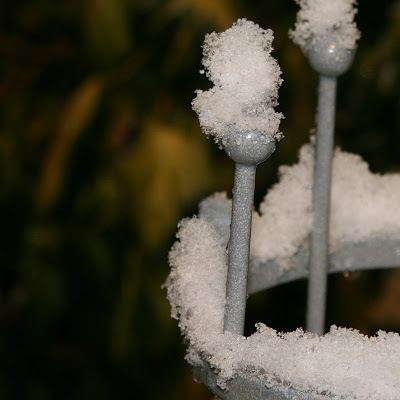 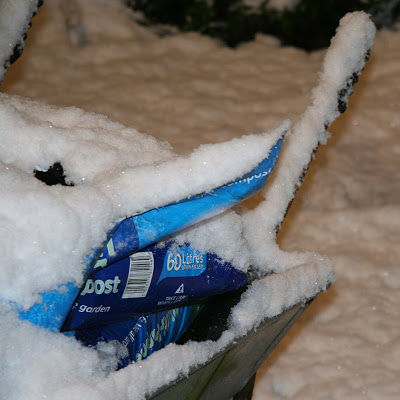 Yesterday’s garden tidy-up was a bigger job than I anticipated… there’s more to do! 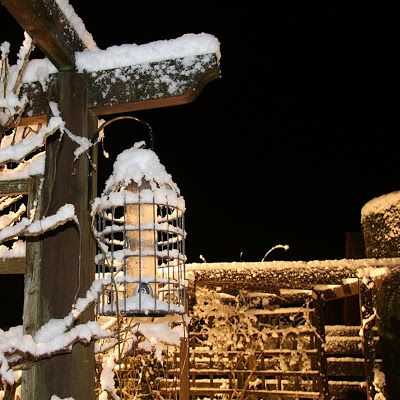 A forgotten feeder away from the main feeding station… empty! Will fill it with peanuts tomorrow to feed the rising number of blue tits enjoying them.
Wisteria stems unpruned… need to trim back to four sets of buds ASAP!

Ah… now it’s the turn of the Snow Queen to test the hardiness of the perennial wallflower Erysium Bowles’ Mauve. 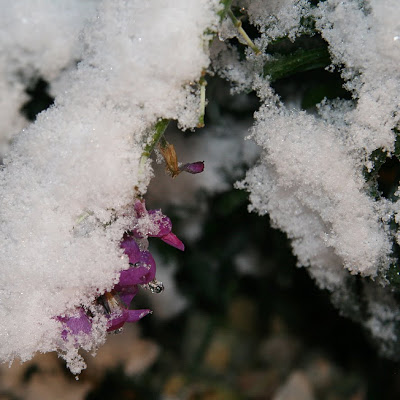 The weight of snow did bend some stems… 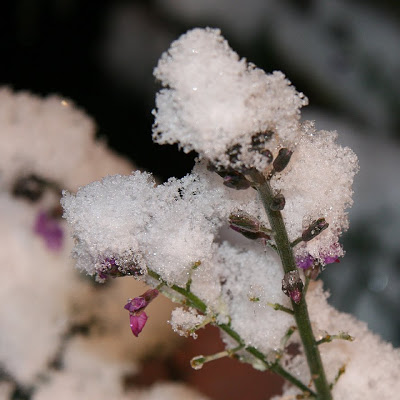 While other stems stood up to her in defiance!
Meanwhile… 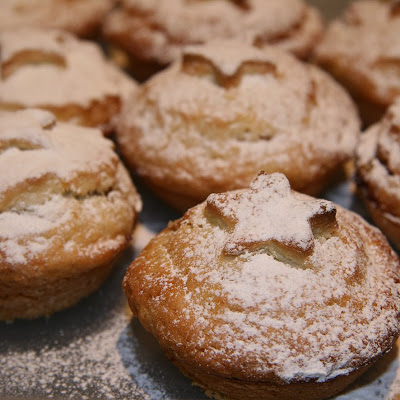 Back in my kitchen, my daughter was busy baking mince pies. This is just the second time she has made them… don’t they look great!

Yep… it was late and she does have school tomorrow! However it’s only until 12 noon and then she is off for the Christmas break. Tomorrow she is having a little Christmas Lunch/Party to end the school term and to exchange Christmas gifts. I can hear their laughter in my head as I type this 😀 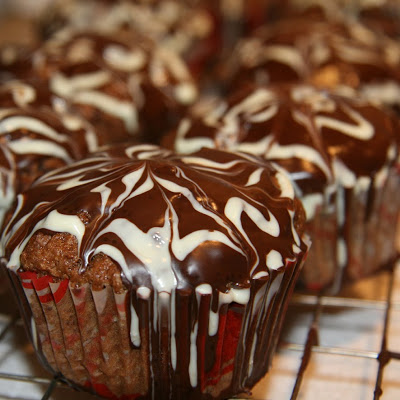 Please let me tempt you with a virtual chocolate muffin to go with a cuppa over the weekend. I’m sure you could do with the energy for all the jobs and shopping ahead. Sh… just don’t tell her I’m offering her muffins around the world! I’m guessing they just might be a little more popular than the mince pies with her friends… don’t you?

I’m also guessing there will be Christmas cooking prep in kitchens throughout the world over this weekend. I for one, especially love cooking for my freezer at this time of year.

My daughter has a question she has asked me to ask my American visitors. I wonder if anyone is able to answer this. Perhaps I’m looking for an American living in the UK or a UK person living in America.

At 16 she is a huge fan of watching cooking programmes on TV. One of her favs is the Barefoot Contessa Ina Garten. Her first question regards ‘half and half’ that is poured out of a carton. Her guess is that this is a cream of some kind but does anyone know if it is like our single or double. She would love to know what its equivalent is in the UK.

Her second question regards the large white eggs she sees Ina using in her recipes. Hen’s eggs here in the UK are a lot smaller and usually brown. Are these white eggs, hen’s eggs?

Okay… question session over. Thanks for any answers. It’s getting late here. My daughter is in bed. I need to get to mine too but I said I’d dry the dishes! Mm… could they wait until morning? Nope… I’d better do them and get her muffins in a box as the chocolate will have gone hard now… anyone fancy another before I put them away?

Wishing you a great time over the weekend, be it out in the snow, shopping, cooking or baking. Perhaps there might be some time for garden watching too 😀

Update 18th December… the video below of our European Robin taking time out from the frantic busy feeders today just had to be included here. I love the Christmas music which was an audio swap with YouTube after I uploaded it. I picked a track closest to the length of my clip but it ends abruptly. On the positive it looks like the Robin has decided the music is finished and I’m off thank-you very much!

I’d also like to take this added opportunity to wish everyone safe journeys on the ice and snow covered roads this weekend. It looks like the snow is hanging around. Stay safe.

The photos above were all taken either in my garden or kitchen on December 17th 2009. The video above was taken through my window on the 18th of December 2009.