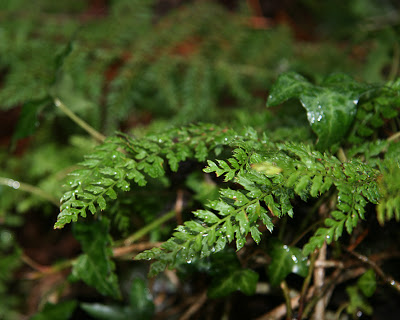 For me, Ferns are the best greens of all. After six weeks (feels like twice that) of a snow and ice covered garden our temps have been slowly rising and with odd rain showers in the last few days… we have the start of garden again!

The evergreen Ferns behind my garden gate were looking wonderfully fresh as I went out for a wander yesterday. They really did stop me in my tracks. This was not a winter scene.

~~~ Clicking on images will enlarge them ~~~

However there are still plenty signs of winter in my garden. After a prolonged cold spell, with frozen deep snow, damage to the growing tips of shrubs is quite common.

~~~ Griselinia ~~~
My favourite evergreen shrub for green foliage, Griselinia, has been hit as per usual. I’ll do nothing with this for now as this damage will die back further down the stems yet. I’ll prune it back nearer Spring when the worst of the cold has passed. This established plant usually comes back again albeit a slightly different shape.

I’m hoping (fingers crossed) the young Griselinia plants I grew from cuttings and planted as a hedge corner in my front garden will be okay. They are still under a deep pile of snow and seeing the stems sticking out now suggest they have been well weighted well down.

Completely flattened and pressed hard to the ground the annual herb Borage was also seen in my front garden. Its distinctive hairy stems made a wonderful pattern on the ground. You could just make out the flower heads there too. 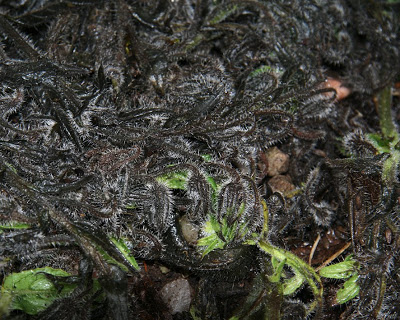 ~~~ Borage (flattened) ~~~
This Borage pressing instantly reminded me of images I spotted on a blog at Randy & Meg’s Garden the other day. You’ll see what I mean here although I should put out a warning for anyone who is uncomfortable looking at snakes.

Randy has posted images of the American Five-lined Skink which is common in the eastern US. I did shiver a little myself as I scrolled through the images. My head saw snake and my eyes completely missed the detail of legs!

The skink is actually a lizard and as this one was so very well camouflaged with the colour of the soil I never noticed the legs. However, the excellent image of a newborn struggling to exit the egg does show the legs and the lizard head very well. I am more comfortable with that image and what beautiful creatures they look.

Randy’s photos are excellent throughout his blog and I would definitely recommend a browse around Randy & Meg’s Garden Paradise where you’ll find many interesting posts which include birds, butterflies, bugs and plants. On reading his New Year’s post, I was struggling to get my head around the idea of hoping to see butterflies on January the first!

Meanwhile, coming back to my ‘part’ frozen garden yesterday you can see more flattened stems and leaves, This time it is the perennial plants that are encased in ice in my back garden. I love this image as it is finally revealing the green of my lawn! 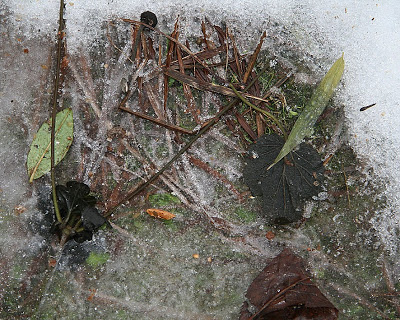 As snow fell again and again in the last 6 weeks, food put out for the birds was covered many times. I love the image below too as it shows the melon seeds that were put out on deep hard snow on Christmas morning have been revealed again as they reached ground level.

If you look closely at the image below you can also see that ice has encased the neat leaves of the perennial Geum (a compact version) which normally would have died back to appear again in Spring. 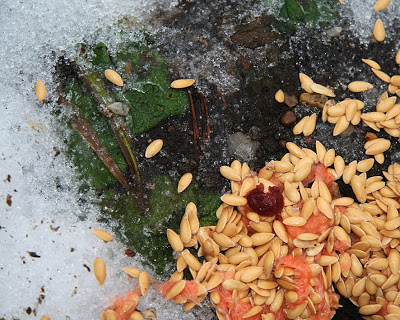 Further walkabouts revealed a few wild strawberries that were lost to the cold seen in the montage below.

In the area behind my garden gate (beside the fern in the first photo) the snow was also receding to reveal my Gunnera with flower spike flattened and leaves looking like wet Rhino skin.

This area also revealed a gardener’s big mistake. My Mum used to say I had green fingers and I could get away with things she couldn’t. I hope this is the case here. 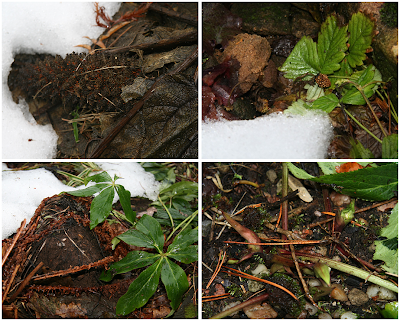 Yep… this gardener completely neglected Jack Frost (Brunnera) and the Snow Queen then covered him up! I love this plant too (hanging my head in shame now). If the snow continues to recede in this area I’ll test the hardness of the soil and try to plant it. I don’t know if it will survive or not – this will be a test for green fingers!

Next to Jack Frost are some Hellebores and I was looking more closely there. Can’t be sure at this stage but perhaps that’s a flower bud pushing up. New flower buds are particularly welcome in winter aren’t they?

Being completely honest, I’m a bit lax in planting for winter flowers. I should really do something about that. Mm… maybe my garden is trying to tell me something… 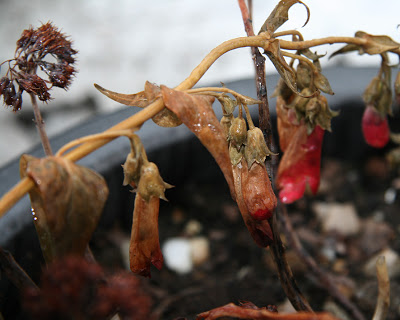 ~~~ Penstemon ‘Etna’ ~~~
What’s this that has been revealed in my front garden today? With the weight of a lot of snow Penstemon stems have been pushed over a pot that had a sedum in it. Wow… it actually has some of its coral bells still on it! Amazing 🙂

Equally amazing (for a second year) my perennial Wallflower Bowles’s Mauve is still trying to hold on to a few flowers in January.

This plant has been under snow for almost six weeks now and is beside the flattened borage shown above and an equally flatten few lavenders! It may not be the prettiest plant in my garden at the moment but it has to get the award for best winter effort 🙂 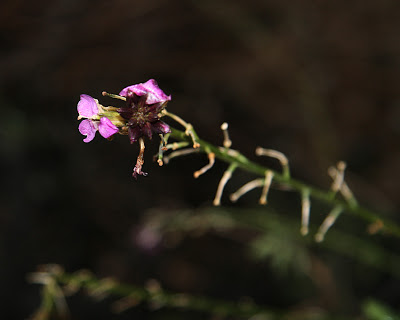 Enjoy your garden this weekend… you do know what I’m going to ask you now don’t you? Three questions today…

1/ Which plant gets the award for best winter effort in your garden?

2/ Have you been a neglectful gardener this winter? If so what are you hanging your head in shame with?

3/ Ah… and the big one… green fingers… do you think they exist?

All photos shown above were taken in my garden on January 5th 2011.

11 thoughts on “Welcome back… green!”