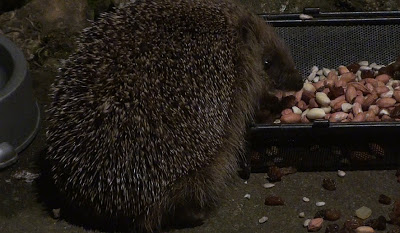 What a great idea to ‘Gang up to make where you live hedgehog friendly.’ With numbers in decline, making small changes to our garden boundaries can create wildlife corridors that will benefit the birds and wildlife that visit our gardens.

Chatting to neighbours about this is a good place to start. It would be brilliant if we could quite literally turn things around for the hedgehog 🙂

Hedgehog Street was mentioned in the BBC Springwatch programme on Thursday and in a blog post. This morning I watched my recorded episode. Great timing then when the first video footage from my garden earlier this week is sitting (already uploaded to YouTube) waiting to be posted. This website looks an interesting read with lots of info.

Fortunately, for the hedgehog, I have long strips of hedge without any restricted access. However, a couple of years ago one of my boundary neighbours had a ‘garden make-over’ and replaced an old fence that I’m guessing had gaps. Since then, I can confirm I have had less/almost no sightings of hedgehogs in my garden. I guess this stopped a route to my garden where food was available.

If it got enough support, I could see that Hedgehog Street (which is a new collaboration between the British Hedgehog Preservation Society and the People’s Trust for Endangered Species, funded by the BBC Wildlife Fund) has a realistic chance of making a difference for the hedgehog’s survival. I hope so 🙂

As you can imagine, after waiting some time, I was thrilled to finally see our first Hedgehog visitor for the year on May 30th & 31st. As regular blog visitors will know droppings have been seen in the garden which gave me a clue that they were around. With the second dropping I spotted being outside my window I knew I had a chance of getting some colour video footage.

So… come dusk, sultanas, unsalted peanuts and water was put out. The night cam was set to watch the area and I was set ready for a quiet, quick run to switch on the outside light. At the window, my video camera was charged, lens cover open, on the tripod, focused on the food and waiting to record! I did this for a few nights.

LOL… like on all occasions like this when you think everything is covered… expect the unexpected! Well, I guess it wasn’t that unexpected really. When the hedgehog in the video footage below arrived and the outside light went on (which doesn’t disturb it) there were three other sets of eyes watching the direction of the hedgehog.

Our family of guinea pigs were running around now excitedly too. To them, the light on might mean I was coming out and maybe grass was on the menu! It was around 11:30pm so they were out of luck there.

Eventually I was out of luck with the first clip in my video too as the hedgehog (after eating) waited still for some time for the noise of the excited guinea pigs to go down. It then walked towards the hutch and round the side of it and out into the night again.

The second clip in my video was taken the next night and a marking on the hog tell me it was the same one which is great news. It also told me why some stones have been moving around my pond edge as this hedgehog walks on to the first reservoir of water for my pump running. I’ll have to make alterations there 🙂

Yep… timed well for Springwatch, we too have some wonderful wildlife to watch again in the garden. Yay! We have been watching some unexpected nest building from a bird not mentioned in my garden before too. The video has been running – fascinating stuff!

Sorry, in true Springwatching fashion I’ll just tease you with that as I need to sort my footage out for this and collect some info. I just wanted to quickly post today after John at Midmarsh Jottings reminded me about the RSPB Make Your Nature Count which is running from now until 12 June. The RSPB say:

“find out how garden birds are doing. We’re also keen to know if you’ve seen other animals including badgers, bats, snakes or frogs.

The survey is quick and fun to do. Don’t forget to submit your results! We’ll use them to build an important snapshot of summer wildlife in UK gardens. We’ll find out which species are thriving and which might need our help.”

Thanks for that John, I missed this with other stuff that has got my attention at the moment. I’ll tease you a little there too… it does involve the RSPB and Springwatch… but it doesn’t involve the BBC 🙂

Wishing you a great weekend of wildlife watching. Mmm… I wonder if you’ll see any swallows 🙂