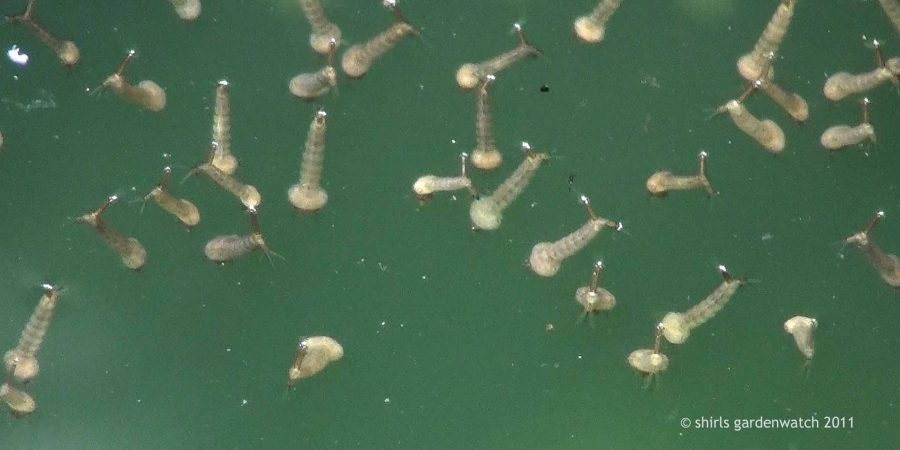 Could it be mosquito larvae? Can you help ID the larvae in this screen grab  of the video below? They were absolutely tiny and were seen floating and wriggling just under the pond’s surface last night. They also appeared to be almost snorkelling which might suggest they were mosquito larvae.

It was suggested to me by blogger Victoria (Victoria’s Backyard) on twitter last night that if so the species likely to be seen in Scotland would be Culiseta morsitans or Culiseta annulata.

Victoria also added they could be midge larvae if I saw any red ones. I had been looking for that. I could see no red in the larvae. She asked if I had frogs or fish as they could eat them. To that my reply was sadly no.

I never considered that more eggs and larvae could be added to the large number seen in my pond already! However, I have been wondering why bats have been flying quite so close to my window during this last week!

Interesting info from Victoria indeed – especially as my pond pump hasn’t run at all this year. It’s faulty and we haven’t worked out what the problem is yet. A job to move up the list for this weekend then 😉

Worrying for me (kitchen window nearby) and the guinea pigs in hutch nearby too, some larvae were seen diving as you will see in my video suggesting they all might do this soon. Mm… I slept on the problem 😉

A quick fishing trip was my short term and immediate response this morning. Should I really have done this before breakfast though… no surprises… the answer is no.

In the absence of frogs and fish to control the high number of larvae in my tiny pond I considered that perhaps ground, insect feeding birds like Dunnocks or Wrens would fancy a tiny bite or two.

With my net I scooped along the surface area of my pond as a start. I left the contents of my net on paving nearby so other pond creatures could crawl back in my pond. I then repeated this deeper in the pond and repeated the whole fishing trip half an hour later… after my breakfast!

The bird ‘breakfast buffet’ did get a few more ingredients to attract as many birds as possible to it. My mosquito muesli had a sprinkling of sunflower hearts, fine breadcrumbs (so birds would search more) and the secret ingredient… grated cheese (left-overs from last night’s salad). Blackbirds were there instantly running away with cheese 🙂

Tonight’s watch will be on the night cam then… for local pipistrelle bats hunting female mosquitos in my tiny pond! I’m not expecting to catch ‘the catch’ but I might see something albeit a bit blurred 🙂

For all my fellow garden blogger’s today (being the 15th of the month) is Bloom Day with Carol over at May Dreams Gardens. You’ll get much nicer photos over there as everyone shares what’s flowering in their garden today.

I think to re address the video balance I should video my flowers today. I’ll be back… with pretty pictures later. Meantime, you might like to catch the Open Garden tour in my last post. Enjoy your weekend and Happy GBBD everyone 🙂

This post was written by Shirley for shirls gardenwatch in July 2011.

14 thoughts on “What’s wriggling in my pond?”