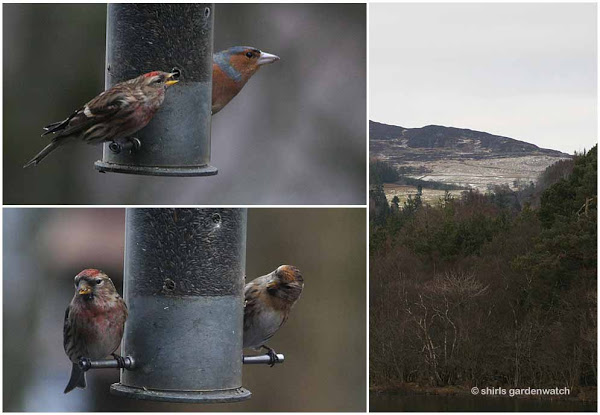 After snowy/icy roads & car trouble, our third recent attempt to visit SWT Loch of the Lowes was a successful one in more ways than one. Our Sunday Safari took us to the benches inside the Visitor Centre, at the observation window, where we joined others in watching the very busy feeders outside.

Redpolls were definitely not on my list of expected birds to see on our visit. Their presence was like a gold star for finally making the trip! There was a little snow around the area so perhaps that’s what brought in the Redpolls this bright afternoon.

I had never seen a Redpoll before. Not being a birder I was guessing what bird this was that was sharing a niger seed feeder with a male Chaffinch. Just look a the head size difference below…

My ID guess had been a Linnet (not seen one of them before either). I asked a member of staff and she told me she could see why I guessed that (it was really the red markings I was going with not knowing where they should be).

We were told we were looking at a male Redpoll. We were also told what the female might look like and shown it in a book. Yep… as per usual it would be duller than the male. I didn’t expect we would see a female too but as you can see above… some time later we did 🙂

Coffee in one hand and video camera on tripod at the ready I always look to catch something different on my visit to this Centre. I was delighted, I’ve also had a bit of fun with my short 2 minute film. Note there is background music as I need to cut the sound of people’s voices. Enjoy…

I’ve looked out this observation window many times but perhaps not during February as winter weather is usually a problem my car journey to the centre. Gosh there were more Chaffinches on Sunday than I think I have ever seen there.

Mallards and pheasants joined the Chaffinches on the ground below the niger seed feeders. Frantic feeding was seen there as well as considerable acrobatic flying from blue, great & coal tits above as my video shows.

Not caught on camera, one amusing moment saw a male Mallard and male Pheasant have a bit of head on squabble. On this visit I was hoping to get some photos & video of the Red Squirrel. Unusually for our visits we never saw a single squirrel.

My next lookout was going to be for the tiny well camouflaged Treecreeper. After capturing images of the Redpoll my eyes turned to one particular tree I have seen them feed on before. I just adore watching this charming little bird but don’t see it on every visit. You need a sharp eye to spot it. However, spot it I did despite the distractions from so many birds at the feeders.

Switching back and forth with still and video camera for the Redpoll, when it came to the Treecreeper it was video footage with better light I was looking for. As Treecreeper viewing time would be short I gave the still camera to my daughter and the girl did good! I caught some video which you can see below too. 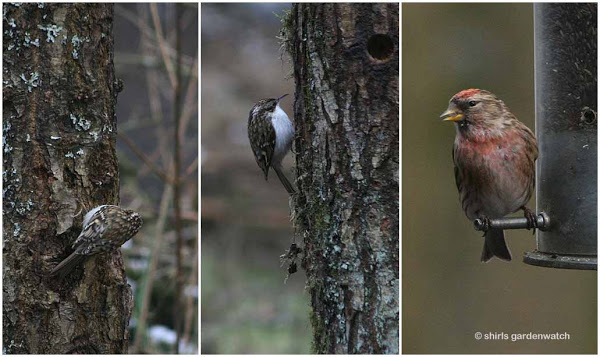 The conditions were good for filming despite the usual reflections on the observation window from movement inside the centre. The Treecreeper swooped over to the bottom of a tree trunk from a cut down tree just in front of me and started making its way spirally up it.

I lined up my camera, caught the Treecreeper in the frame and it spent quite a while feeding in the one area. This was brilliant – a good, clear close-up view. I was thrilled.

You can imagine my disappointment then, when I got home and realised that I was too busy enjoying watching the Treecreeper and I hadn’t hit the record button on my video camera… doh! I doubt I’ll ever get quite a view like that again 🙁

However, shortly after, the video was recording for view of a Jay feeding at a bird table right in front me. I had never seen that before. Window reflections were more of a problem here, but even so the view of the Jay’s head with eyes and beak were quite a scoop for me. I’ve never seen the Jay so close – what a pretty face it has.

The short video compilation below also shows a capture of a female Great Spotted Woodpecker (my best so far). You can see the difference in size, shape and use of the beaks between the three birds. I always find that fun to watch.

Finally, our Safari quickly concludes with a photo of the female Great spotted Woodpecker that I managed to get, an arty shot of a male Pheasant by my daughter and her quick capture of the Jay on the tree branch just above the bird table. 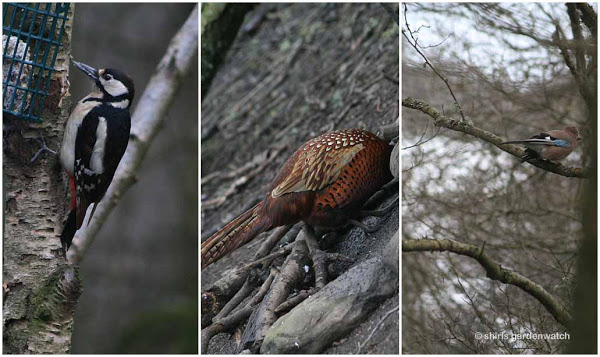 Quickly, before you go I have a question for you – I’ve asked around and been told it was a Lesser Redpoll we saw. Can others confirm this?

This post was written by Shirley for shirls gardenwatch in February 2012. The images above were taken on February 19th 2012.

17 thoughts on “On safari – Redpoll first”