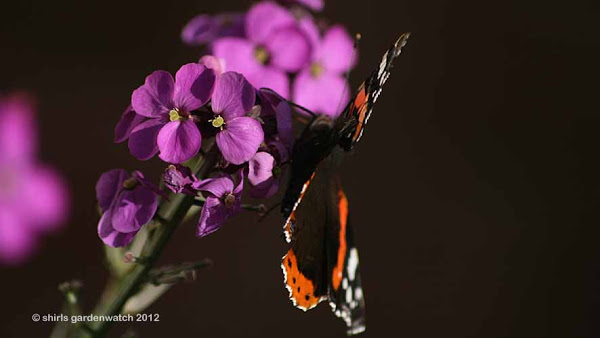 After September’s new garden visitor the Comma butterfly to my sunnier front garden, the Red Admiral butterfly has now made an appearance or two for October! Hurrah for some sunny, dry afternoons/early evenings to get out and watch them… with a camera to hand of course 😉

What a delight it is to see butterflies visiting the garden at any time of year. Ah… but I’d take a guess that I’m not the only one that finds visits at this time of year much more special with time and warm, sunny days fast disappearing for another butterfly and gardening year.

Yep… the weather is definitely turning and leaves were seen dropping from trees like a heavy snowfall yesterday. Then the heavy rain we were expecting followed. No butterflies spotted to catch my camera lenses yesterday and none likely today as the rain continues. However, last Sunday… 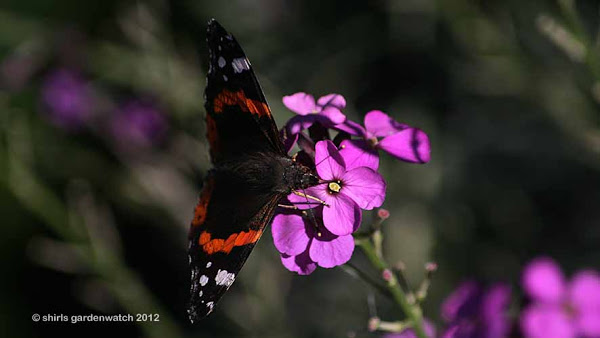 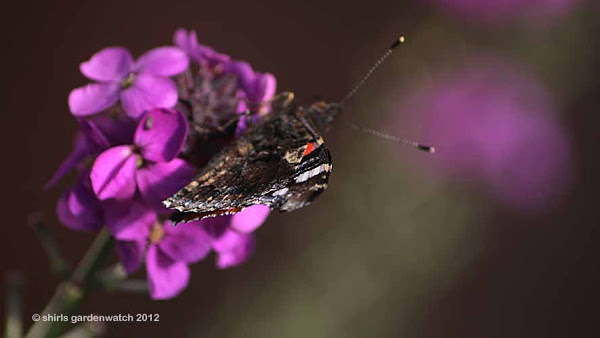 The pretty mauve flowers above that the Red Admirals are feeding on belong to Erysimum ‘Bowles’s Mauve’. This plant has seriously earned its place in my Scottish garden managing to flower for almost every month in the year – even with a good snow covering mauve flowers can be seen peeking out! I especially love seeing these flowers with frost on them as they look sugar coated and something I would decorate a special cake with.

Taking photos, especially close-ups, of wildlife visitors and flowers I have found to be a special experience. I definitely recommend it! I’ve discovered the small, pretty details and behaviour patterns that I never noticed at all before I began picking up my camera. What a lot I was missing 🙂

Capturing photos of butterflies feeding on the springy stems of the Erysimum on breezy days has been a tad tricky that’s for sure. Then again, the butterflies flutter around so quickly from flower to flower making capturing video a bit of a challenge too as you will see below…

At least four Red Admiral individuals have been visiting regularly. Up to three Red Admirals have been seen feeding at the same time alongside two tatty looking Small Tortoiseshell butterflies and a variety of bees. I know there has been a fourth visitor as the tatty Red Admiral seen in my photos and video isn’t always spotted when the others are feeding.

For those who aren’t able to watch the 2 minute video above, it begins with close-ups of the Red Admiral butterfly feeding/walking over heavy flower heads of sedum (not sure the variety) which are very popular just now too. The breeze is bobbing the sedum about too. You can see the tatty, Red Admiral feeding on the Erysimum but there are a couple of fun clips in there too like sunbathing on Heuchera and tongue sticking out on the front doorstep 🙂

The large, tatty tear in the Red Admiral’s wing can be clearly seen in the first photo below. I saw that easily when taking my photos. However, in the second photo I didn’t notice until I had cropped my photo that the Red Admiral has a white underside to its head/chin which looks pretty. Lol… I also noticed it looks like its wearing fashionable, stripped socks! I’m guessing they are grippers of some kind helping them hold on during breezy days or upside down moments which I’ve noticed they do often – does anyone know? 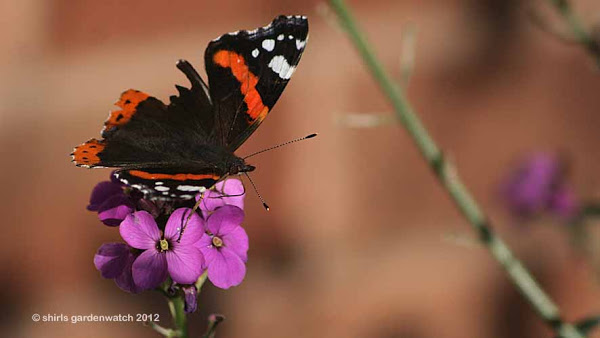 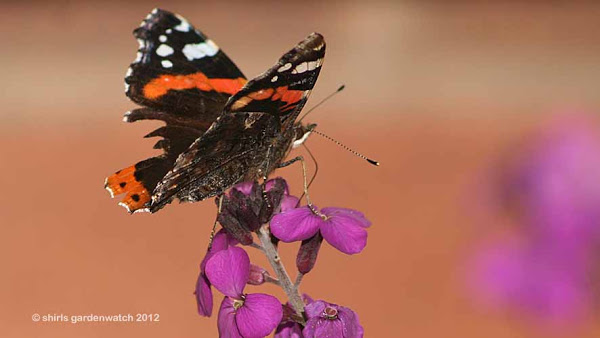 Butterflies are seen sunbathing in my front garden on the brick house wall, windowsills, gravel on paths and rocks in borders. However, I loved the image below of a Red Admiral warming itself on ‘Marmalade’ Heuchera – that did make me smile 🙂

I have been spreading ‘Marmalade’ around my shadier back garden for a few years now. I love it. I didn’t know how it would fair in the sunshine of my front garden but it seems to have coped okay with its leaves becoming much lighter in colour. Lol… you could say we have golden Marmalade here. Note how worn the black parts of this Red Admiral’s wings are… 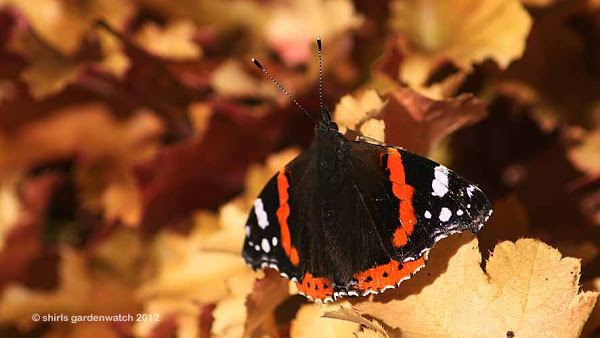 Another golden photo moment was of a soggy bee on this same Heuchera planting after a rain shower back in the middle of September. I guess as the sun came out it was hanging out there to dry out. Had I not spotted an even soggier bee on the sedum I wouldn’t have picked up my camera at all… and I would have missed this behaviour completely. The good news is that when I checked some time later, both bees were gone so I am assuming they had successfully dried out and buzzed away. I should have a fun competition for captions in these two photos… 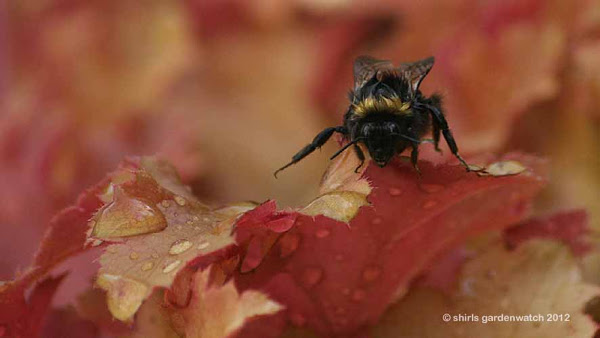 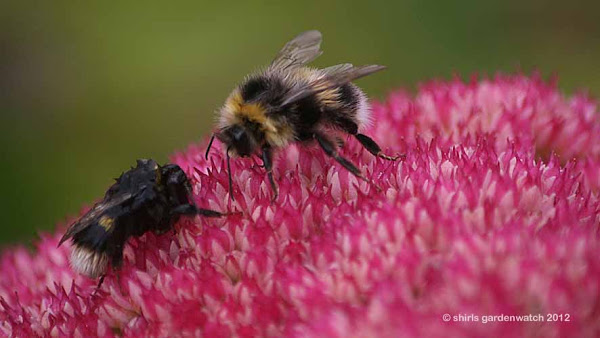 Reading through the webpage on the Red Admiral Butterfly on the Butterfly Conservation Website, I see that fresh new butterflies can be seen from July right through to October and even into November. I doubt I’d see any that late, but now I will keep an eye out. Hibernating Butterflies start emerging from March/April. The reality for my garden is our main sightings are usually at the end of the season, then as quickly as they begin appearing… they disappear again.

The Foodplants section for the Red Admiral caught my eye…

”In Britain and Ireland the most important and widely available larval foodplant is Common Nettle (Urtica dioica). However Small Nettle (U. urens) and the related species, Pellitory-of-the-wall (Parietaria judaica) and Hop (Humulus lupulus) may also be used.”

What really caught my eye above was the Hop. I have this plant covering a structure just over the fence in my back garden. It’s been there a few years now and can be seen scrambling through plantings and even under the fence. I wonder… could it be responsible for the highest number of Red Admirals my garden has ever seen? 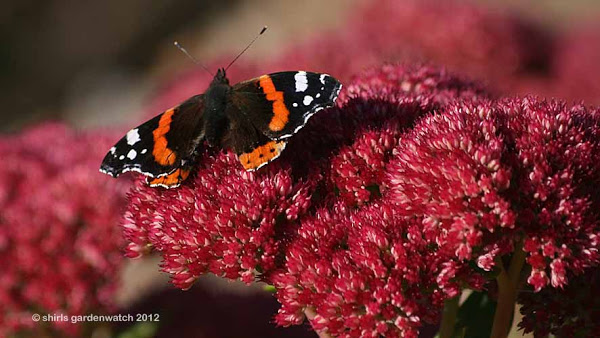 Looking through my basic pocket book on Butterflies & Moths I discovered Red Admirals can be seen in the autumn drinking from fallen fruit, including rotting apples. Now… it just so happened that I had a cored apple at my bird feeding station in my back garden. I removed it, cut it in half and placed the pieces on two warm spots beside rocks in my front garden where I’ve seen butterflies sunbathe.

Did I spot any butterflies feeding on the apple during a dry spell today? Nope… just a wasp. So, it’s safe to say I won’t be placing a piece of apple on my hand to attract a butterfly to feed on it… which I read they may do.

Viewing my newly uploaded Red Admiral video above, as per usual, a further list of similar videos were displayed on a column on the right. Here, I spotted an interesting video of a Red Admiral feeding on apple juice on a hand. Also in the list, I spotted footage of Red Admirals feeding on ivy flowers.

Now… on another structure in my back garden, my pergola, I have two varieties of ivy. Although, I keep the pillars trimmed for walking through, I let sections of the top grow as it pleases and… there is a good clump of flowers up there! The big question here is… will they open in time for the butterflies to feast on them? I’ll pay attention there now too 🙂 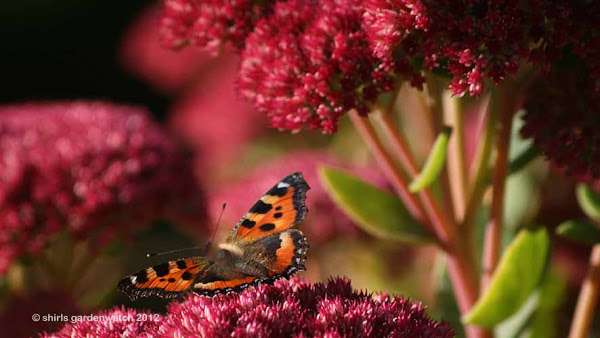 Finally, I should mention my planting of sedum that is maturing nicely in my front garden. It goes through many pretty colour shades at different times of the day as the season goes on. At this time of year, I love the richness of the colours from the last rays of sunshine come early evening. That’s my favourite time to go out with my camera too.

Tell me, what are your favourite butterfly visitors? What species are visiting your garden and which plants are they enjoying at the moment? Perhaps you’ll get some warm sunny spells over the weekend and the time to get out watching what flutters by. You might find yourself with a camera to hand too… enjoy the challenge of capturing butterfly images 🙂

This post was published by Shirley for shirls gardenwatch in October 2012.