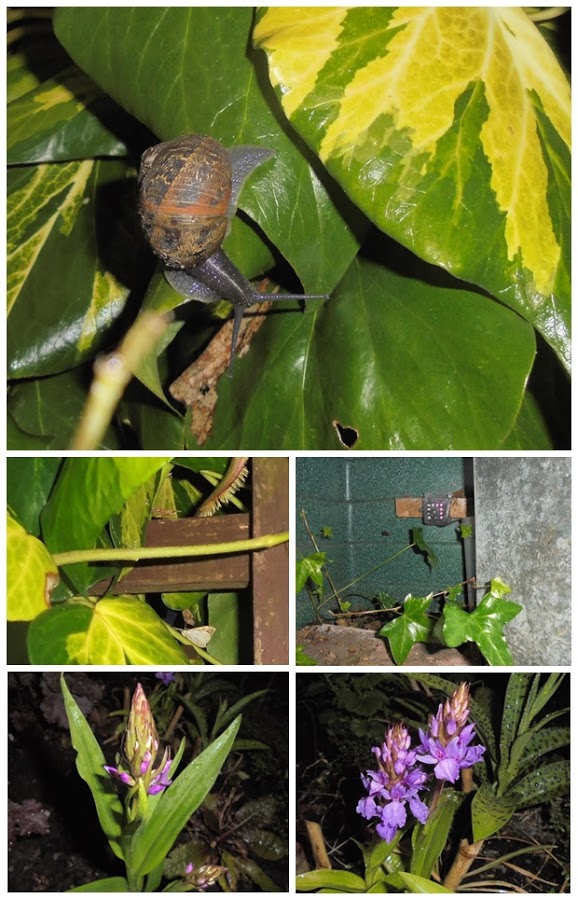 I secretly hoped a Hedgehog would walk by me en route to the feeding station but alas it was a no show. Then again, I have noticed that on wet nights I don’t see hedgehogs visiting much at all. They weren’t seen via the camera the feeding station either. Maybe later during the night they will be in.

Images from tonight’s garden wander in the dark.

As it was wet, I took a compact camera out with me that would flash at everything. Bats were seen flying around the garden but try as I might I was unsuccessful in capturing half decent images of them. They are very challenging to follow sweeping around the garden at speed.

Much easier to photograph on a wet, dark night were the orchids near the foot of one of the ivy clad pergola poles – I do love them. The one on the left is a recent arrival after the Gardening Scotland Show last weekend.

I also took the opportunity, with no hedgehog in the feeding station, to take blind photos inside at the camera end and I can see that there are cobwebs over the lens. I’ll try and clean that up and pull out the ivy that is growing in there soon. Perhaps I could add a frog shelter below the camera for possible toad-lets from the pond. I’ll ponder over that one – ha-ha, no pun intended 😉