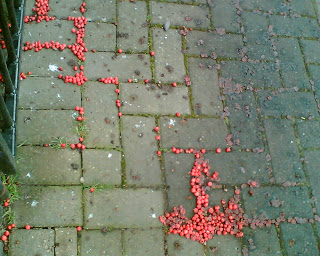 A trip into town today gave me cause for concern. I had just parked my car and was walking along the pavement en route to the shops when I caught sight of something. It wasn’t strange or that unusual to see – but my thoughts were! I had just passed an open, brick paved driveway that was strewn with berries dropped from a large cotoneaster tree that overlooked it. My thoughts were what a waste – as the birds could have eaten these berries. That’s okay. But then I took that to a whole new level, thinking they could be swept up and collected to feed the birds. I decided to take a photo on my phone to record this moment.

I blame the Robin. If it wasn’t for him and my friend in Australia missing him I would not be writing this now. I began this Blog to share our birds, plants and weather with my friend and anyone else that doesn’t know what we have here – a little piece of Scotland.

I have had until now, what I would regard as, a pretty normal interest in birds that has definitely grown considerably in the last two months since I have been taking videos and observing their behaviour. Today’s thoughts – should I be worried the birds are taking over?

The photograph, shown above, was taken on my mobile phone on February 1st 2007.