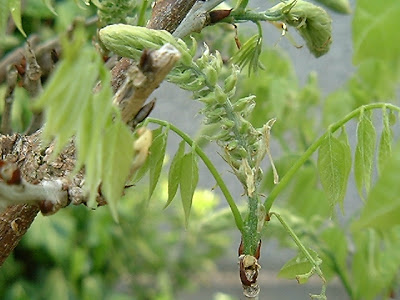 Last week I happened to notice a magazine with the heading “Why won’t my wisteria flower?” Well, if you are like me who has had an unforgiving wisteria for years, which just wouldn’t part with a single flower, you will be drawn to the buy the magazine just as a bee is drawn to the pollen on a flower. The magazine I picked up was Gardener’s World and the article was written by Alan Titchmarsh to read it click here.

Weak wisteria flowers, shown above, I was finally rewarded with two years ago – after approx 8-9 years of patience! I have to say despite them being rather pathetic specimens I was absolutely thrilled to get them. I had given up all hope. My wisteria is the variety sinensis ‘Alba’ – a white fragrant one. The flowers last year were not much better in quality either – I didn’t even bother taking photos.

The article in the magazine suggests considering the location (ok), pruning twice a year (done) but it also suggest something I haven’t done. It suggests a feed with a high potash-rich fertiliser, such as a specialist rose fertilizer. I plan to get some from my local garden centre tomorrow. I am late with this feed. Alan suggests in his article that February is the time to give it – but better late than not at all! It is definitely worth a try, extra watering too. If this year is hot and dry some extra pampering perhaps won’t go amiss.

For more information on care of Wisterias, by the RHS, click here. To see how well my wisteria flowered at the end of May 2007 go to Wisteria from bud to flower .

The photograph, shown above, was taken in my garden on June 4th 2005.