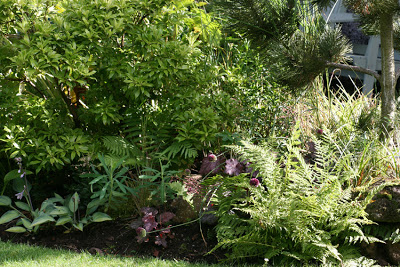 Writing this diary/blog I have discovered a high percentage of gardeners love their cats. However, not all do for a variety of reasons. I have to be honest here and say I am a gardener that doesn’t. Fouling is one aspect that bothers me especially when my children were young. Although much of my garden now has gravel mulches and a lot of ground covering plants, which does help, I still want to protect its young occupants – our visiting birds. The young birds are particularly vulnerable and in the last week I have found two dead greenfinch juveniles – hence my decision now to do my review of the CATWatch deterrent which I have been using for seven months now.

How does it work? Well, it is a motion sensor that claims to detect movement up to 12 metres away and emits a high pitched sound (silent to humans) specifically at a cat’s hearing frequency. The visiting cat will then learn to avoid this area. It is placed via a spike into the ground and can be used with mains power or one 9 volt battery – I have used a battery. I have to add at the time I bought mine it was the only unit that the RSPB have tested and recommended.

What I have found is that in the winter when my garden is more open the unit appeared to work very well. Although in saying that, I was changing the battery after only a month – but it wasn’t the cats that were necessarily setting it off. As the blackbirds and other birds ran around the ground they set it off – it detected their body heat. I would gather from that any cats getting close would go no further – so no cats were seen. However, I did see a cat walking by the day after I put the unit out and it got a lot closer than 12 meters before it set the sensor off – a red light also comes on and I spotted it from my window. I know it states that it cannot work through solid objects but this area was relatively clear. 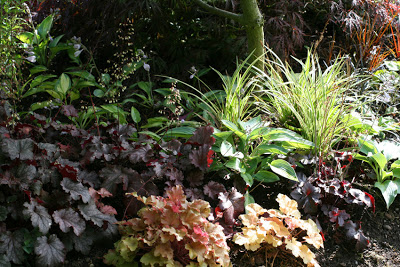 During summer when the plants are in full growth, as you can see above, the cats have more spots to hide and pounce so I have been moving my unit around. It is still a small area I am covering with this unit. Now I have found it is not so effective – as the dead birds will confirm. But then again I have a lot of young birds visiting and many are surviving too so I am still happy with my purchase.

I have used approximately five batteries since January. After I found the last dead bird I went out to check the battery and noticed although the light came on when I approached it was sluggish so I decided to replace it in this instance. When I opened up the unit I found wet earth in the battery compartment – more than usual. But that was not all I found as you will see in the photo below. 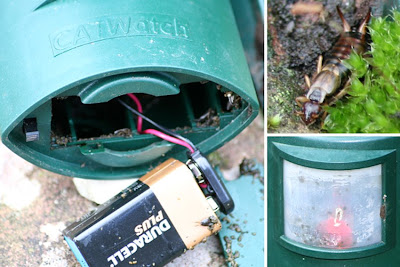 Common earwigs were crawling about the battery compartment – I had a very unpleasant few minutes tapping them out! There had to be about 25 of them. I looked up my book to identify them and it looks like debris from the feeders might have attracted them. This is the first time I have ever found them in the unit – it is usually in an area covered with bark chippings. When changing the battery I also noticed that the screen on the front of my unit has unusual break so I hope my unit is not faulty. It appears to be working fine.

The big question – would I recommend it? Well there are many deterrents like this one, less expensive too, but what I like about this one is that it is training the visiting cats to use another route. I also feel comfortable in using a unit that the RSPB both tested and recommends. From my windows I am unable to see many of the birds that are on the ground now. I feel sad when I see dead birds in my garden but in using this unit I do see fewer cats in this area, none in the winter, so I do feel it has helped greatly.

Update: August 22nd :
After finding a number of dead birds in my garden, with two greenfinch juveniles seen leaving in the mouth of the same cat, I felt my CATWatch unit has developed a fault. Yesterday I returned it to my local RSPB, where purchased, and it was exchanged with no problem. I feel much happier to have another unit working again. Unfortunately the cat in question was still on the prowl! I took one extra step – a trip up to my local garden centre for another product. ‘Silent Roar’ I used almost ten years ago. It is environmentally-friendly and contains no artificial chemicals. Silent Roar is pellets soaked in real essence of lion dung, dried and sterilised. As cats are territorial, it is claimed that even the bravest will retreat with the smell of a lion. I scattered the pellets under the trees and plants where I have seen the cat hide and also at entrance points to the area that has the problem. Today I did see the cat in the distance, near my hedge, so I hope my measures are working now.