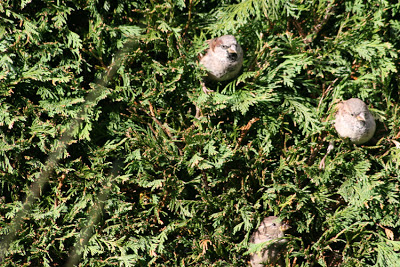 This morning’s bird count wasn’t planned. I was up early, the house was quiet and so was the garden as I opened the curtain to another beautiful October morning. I love to watch my garden awaken in the morning. I looked up my blog and saw in was the 7th March when I did my last Early Bird Watch. During the summer my attention was drawn to all the juvenile birds that were visiting and now in hindsight I wish I had done a count then. This morning’s Early Bird Watch was done between 7.30-8.30am.

The Robin was the first bird I spotted this morning not singing from the trees but bouncing along the ground – it soon found the sunflower hearts I scattered under my small domed Acer tree yesterday. This morning I saw one Robin.

A Juvenile Blackbird closely followed the robin beside the pond. I have to say I didn’t expect to see one of these this morning – its back feathers had turned black but the front was still brown not unlike the photo below which was taken of another juvenile in May this year. Recently I have noticed the blackbirds return to running around the plants chasing each other. I had also noticed a few different partial albinos (blackbirds with white feathers – often on the head) and one did visit this morning. The photo below was taken earlier in the year – I would like to get some better photos to show the different patterns of white feathers on these birds. This morning I saw five Blackbirds. 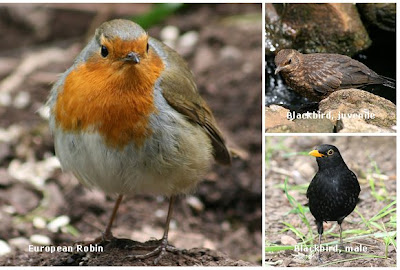 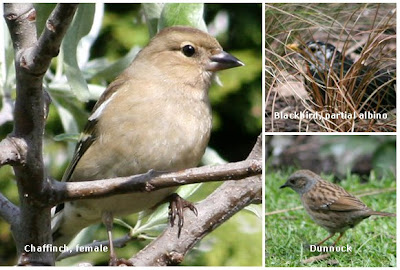 Singing from a tree branch my attention was next drawn to a female Chaffinch. I had never noticed her singing before although it is sometimes difficult to see who is singing from trees when there are leaves on the trees. However my neighbour’s cherry tree was given a severe pruning last weekend so now as there are only stumps left we can easily see the birds. However, this Chaffinch today was singing near my feeders on the branch of my cotoneaster tree – whose berries are looking particularly well at the moment. Soon the birds will eat the berries but as I planted it for them to eat I don’t mind about that at all. This morning I saw five Chaffinches.

The Dunnock is particularly hard to see on the ground as it darts about under the plants. I love to watch it. It also can be seen visiting the bird table too as it did this morning. This morning I saw two Dunnocks.

The House Sparrows are always very entertaining to watch in the garden. They really are great fun. Recently they appear to have claimed the caged feeder as their own – scaring off any other birds that come along as well as fighting with each other! Although without a doubt my favourite sightings of the House Sparrows has to be them popping in and out of my hedge. They appear in a scattered formation overlooking the feeders which are just a metre away. As I use my zoom lens to catch them I have difficulty in getting them in focus – it is also very difficult to predict which gap they will pop through when the start doing this! I have seen at least 15 do this at the same time. This morning I saw seven House Sparrows during my count but more came later.

Blue Tits and Great Tits are also difficult to catch with my camera as they are so quick to the feeders. Often they just take a sunflower heart away and eat it from the safety of a tree branch above. However the are very easy to spot in flight with their short swooping flight pattern. This morning I saw one Blue Tit and one Great Tit.

Greenfinches on the other hand are much easier to catch on film – but also by the cats too! They also fight amongst each other but the video below taken in September 2006 shows that they can eat nicely too! This morning I saw four Greenfinches.

Flying over the garden I spotted a group of eleven seagulls, two crows and three Woodpigeons. I had wondered if I would see a Sparrowhawk but no sign this morning. However it is the Woodpigeon in flight that always surprises me. It is really fast and smooth – quite a contrast to the way it waddles slowly and clumsily around the garden. Today it made an appearance at the feeders stopping the smaller birds getting near for a while and then on the ground at the scattered sunflower hearts. Although one Woodpigeon was not keen at all to share its find this morning and continually chased off its prospective dining partner – quite unlike the pair in the video below taken in January!

Finally, I have to add here that although it appears I have a wide variety of birds in my garden these are by no means the only birds that are visiting at the moment. For those who are not familiar with my visiting birds I also have Coal Tits, Goldfinches, Siskins, Starlings, Song Thrushes and an occasional Sparrowhawk visiting. I probably still have a wren but as the ground is covered with plants I am unable to see it easily. Today was really quite tricky to see and count the birds on the ground with all my plants in full growth but what a lovely exercise this is – I would definitely recommend it!

None of the photos or videos shown above were taken in my garden today.