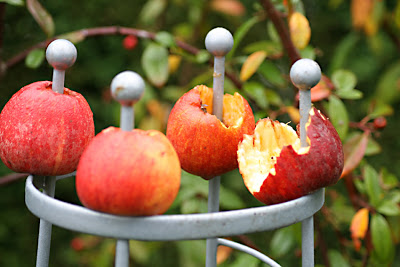 Yesterday I posted on my flowering plants. As I said in that post there are only a few flowers in my garden at the moment. However last Friday I had a bit of fun adding splashes of seasonal colour by putting apples out for the birds. You can read about that on my post . Apples Grow on Obelisks .

So one week on – what happened? I had now idea if I would have anything to report at all. However after only two days I saw evidence that someone had taken a nibble at an apple from the tree and the obelisk. It was to be a few days later before I actually saw an apple being eaten.

I moved my obelisk to a different location beside my cotoneaster tree where the blackbirds were beginning to help themselves to the berries. I planted that tree beside my feeders especially for the birds so I enjoy seeing them take the berries. By moving my obelisk I was working on the theory that the birds that enjoyed the berries may also enjoy the apples! You can see in the photos below that this indeed worked. 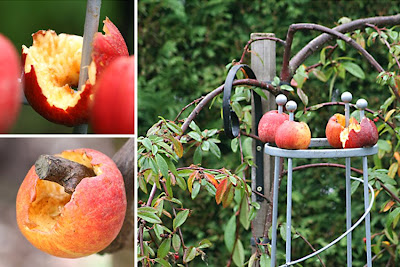 So who have I seen eat the apples. Yep, the blackbirds as I might have guessed but what I didn’t expect to see was a blue tit having a taste too! Yesterday in the lunchtime sun I caught a blackbird eating the apples with my video camera which you can see below – that was an extra result!

Unfortunately the film doesn’t look quite as clear as my original but I thought it was such a nice piece of film especially when the blackbird turns the apple round. I am delighted to report success with this experiment. I think it was the location of my obelisk that did it. Mmm I wonder what I can try next.

The photos and video shown above were taken in my garden on November 15th 2007.

9 thoughts on “Apples on Obelisks – a result!”