December flowers are pretty thin on the ground in my Scottish garden but surprisingly I do have a few to share for this month’s Bloom Day post and for a change I am early! Carol at May Dreams Gardens must be delighted to have had so many participating blogs during this first year of her initiative in posting what’s in flower on the 15th of every month. I have really enjoyed taking part and look forward to browsing the other gardens through the comments on Carol’s December Garden Bloom Day post over the weekend. 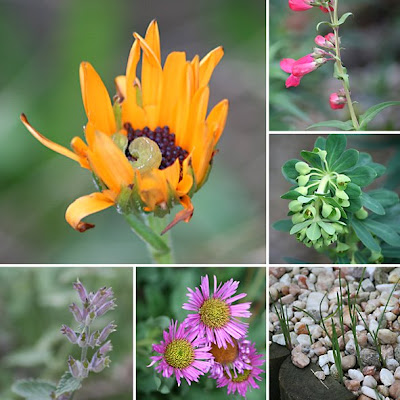 In my front garden I found a few surprises, shown above. My bright orange osteospermum has decided to open a few flowers – silly thing! The real surprise though was that I found a caterpillar inside it! We have yet to have a real hard frost so I expect that is why this plant still lives on. However I think I will lift them over the weekend, pot them up, and put them in my greenhouse. I might also try rooting some cuttings in water – I wonder if that would work. I have never grown osteospermum until this year and I have to say it has been a bit disappointing.

The coral red penstemon has still a few bells hanging on there too and the pink aster also has a few clusters of flowers and some buds to open. The nepata has just the hint of purple blue on a few stems but I think it is perhaps time to cut it down as they are starting to die back. But in contrast there are a few new clusters of flowers emerging on my euphorbia. Ahh but the biggest surprise in my front garden is the leaves of allium growing up through the gravel. This I suspect is the pale pink flowering one shown in my allium post last week. I am looking forward to seeing what will happen next with these young plants – they have seeded themselves so I doubt they will flower next year anyway or could they? 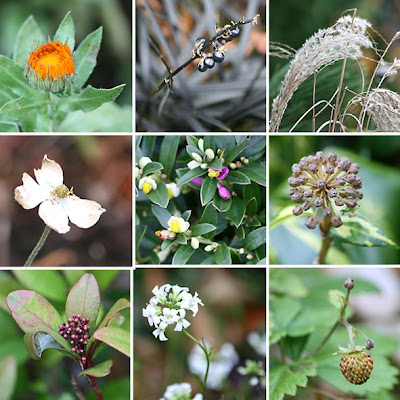 In my back garden I had to look a bit harder to find flowers and this is indeed a mixed bag in the photo selection above but yet I still had a surprise there too. The very last photo shows a tiny alpine strawberry! Can you imagine that at this time of year – in Scotland?

I found a few deep orange calendula flowers – again trying to open. The black grass ophiopogon was still holding on to a few berries butI will leave these ones to drop themselves. The fluffy seed heads of the ornamental grass Klein Fontaine catches my eye as I look out my window – I will leave them through the winter.

The last white Japanese anemone flower is now finally on its way out – this plant has given a great show this year and I am about to add a few pink ones that I picked up as bargains at the garden centres in the last few weeks.

Polygala, shown in the centre of the selection above, has probably given the longest flowering season by far in my garden and has been flowering since March with its cream/lemon and purple pea-like flowers. It has grown into a wonderful carpet in my rock garden. My sulphur heart ivy growing up and over my pergola has also had flowers on it this year which will provide food for the birds. I have to say I had never noticed these flowers before but there are quite a number of these cluster balls which actually look quite pretty.

My sulking skimmia was moved earlier this year as it wasn’t showing berries. Now of course I cannot see it from my window and yes the picture above tells all – third row, first photo. Okay so let’s go back to the rock garden for another long flowering plant beginning back in April. These little white clusters of flowers are borne on short stems from mat forming cream splashed foliage and have lit up this area practically all year. I think this is perhaps a variegated arabis.

So finally, this month’s selection is brought sweetly to a close with the alpine strawberry! Mmm I wonder what I will have for next month – perhaps some snow scenes?

The photos above were taken in my garden on December 14th 2007.