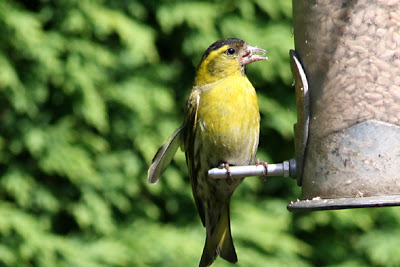 This last week has seen quite a variety of activity with the birds visiting my garden. Sorry, I don’t have any new photos to share. Last Thursday we had a new visitor to the garden. Spotted feeding on sunflower hearts, that drop from the feeders, was a Collared dove! How pretty it looked and quite a bit smaller than the woodpigeons who were keeping a watchful eye on it. I have seen it visit a couple of times since. Well almost visit, as it looks over my garden perched on my neighbour’s tree.

Song thrushes also made a return visit over the weekend – I was delighted to see them! They are also such pretty and graceful birds. The minute I spotted two running around the borders I quickly threw some sultanas on the ground to encourage them to come back again another day. I haven’t spotted them since but I do believe they will come back again. I just hope I can get out with my camera in time when they are here!

Focused on one spot (the birdfeeder hooks) my video was left on record a couple of times today. What was I trying to catch? Well, the title of this post probably gives you a clue. I was trying to catch the male Sparrowhawk – another new visitor to my garden. Despite its reason for being in my garden (which I still get bothered by) it is actually a handsome looking bird with its orange tinted breast.

The female, well she isn’t so pretty especially when she is sitting on the ground under the feeders with a bird like the one above in her claws. The woodpigeon who thudded into my window to get out of her way this morning alerted me to what was going on. I opened the window and she flew off with her catch – I couldn’t have her eat it under the feeders! Oh… the male siskin is such a pretty bird too as you can see in the photo.

Over the weekend we also saw part of a chase by the male Sparrowhawk but I am not certain how the whole chase went. What I did see was what looked like a crow or jackdaw dive at the Sparrowhawk as it was trying to catch a bird from the feeders. The Sparrowhawk went away with nothing that time. I wish I had seen the whole chase as it looked quite dramatic! 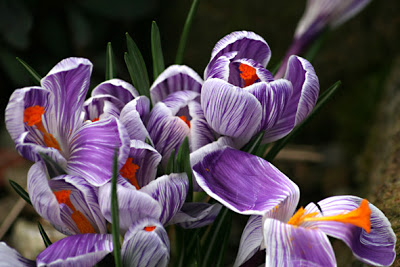 A pretty photo is what is now needed to end this post. Back to the plants once again and what a catch this was! I passed through the display benches at a garden centre today. Bulbs were bursting out the soil of small pots and the sign above read ‘Plants reduced’. Well, you’ve got to take a look!

I picked the pretty ‘Pickwick’ crocus (try saying that fast!) shown above a few hours later in my garden. Well you knew ‘this’ was going to have a happy ending! The bulbs, yes granted, are almost past their best but three pots at 10 pence a pot, what a great bargain this was. I can still enjoy them until the weekend too! Mm… I went looking for more display tables with ‘pretty’ signs above them.

Sedum ‘Carl’ was being sold for just £2 – I really needed a basket now. Oh… who doesn’t enjoy this kind of plant shopping? The poor plants may get thrown in compost bins if they don’t get sold – I feel I am saving them! Walking out to pay for my plants I passed by another bench with plants. Oh… wait until you see this one!!

9 thoughts on “Not always pretty”