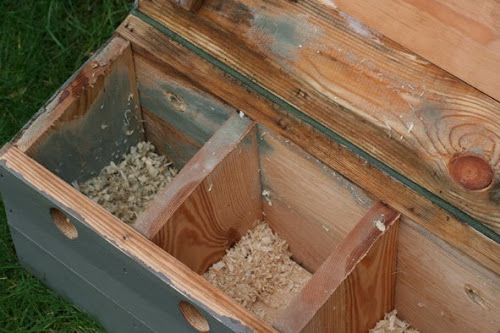 Introducing… Blue tit Nestbox number two which is becoming popular if not a little controversial in my garden. Should it stay or should it go?

The Nestbox above is situated above the arch at my silver border. It has replaced the terrace Nestbox that was previously sited here. Why did I take the terrace down?

If you are new to the Nestboxes in my garden here is a little update. The very first Nestbox I put up in my garden was a terrace – one long Nestbox with three separate compartments, all with an entrance hole. It was used by a blue tit two years ago who built more than one nest. We replaced it with another the same as the first had water damage.

Recently this new terrace saw much activity with a new blue tit visiting the garden. It was seen removing the wood shavings at great speed from not one but two of the compartments! We decided to help it by removing the rest and had intended putting it back up until we saw why it left one compartment alone – you can see below. As the house sparrows have shown no interest in this box and blue tits are not likely to nest together I decided to spare one poor blue tit the trouble of building two nests – which it would.

Unfortunately with one thing and another it was two weekends before we put up a replacement single box. In this time span the new visiting blue tit moved on. I did wonder if we were too late putting it up ten days ago. However, within just two days it did get a pair visiting showing a great deal of interest! Great news – or is it?

The sting here is that this is ‘the daytime pair’ that had been visiting my Nestbox that has a camera in it! Oh… what to do now. I watched them go occasionally to the camera Nestbox but more visits were going to this new one above the arch. I thought about this long and hard. I would still be able to at least see them go in and out of the box without a camera. We had a rooster in the camera Nestbox perhaps it would build a nest too? 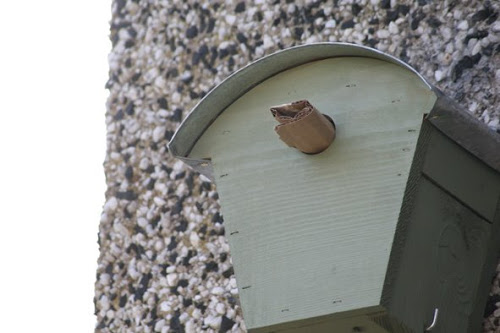 After much deliberation I decided to block the entrance to the new box to encourage the pair back to the camera box. They were somewhat confused to say the least – trying to see past my tube of cardboard. I felt a pang of guilt with this but as I could share this nesting experience in my Nestbox that had a camera I chose this route.

What happened next? Well this pair of blue tits snubbed my garden completely! They still took food from the feeders but took it away to eat it – they usually stayed and ate near the feeders on branches of trees etc. I cannot tell you how disappointed I was now. I did nothing for four days. Then I took the tube out of the new Nestbox with the thought that they may come back to it – if they would not come near the one with the camera.

Unbelievable less than 15 minutes after the Arch Nestbox was opened up again this same pair were back in it again. I have to say I was so glad to see them again. Okay I would much rather they used my box with a camera but this way at least we could see nesting albeit from the outside of Nestbox. They are back visiting the garden feeders together again and sitting on branches eating the food from them. All is back almost as it was. But what has been going on in my camera Nestbox…

All photos and videos above were taken in my garden during March 2008.