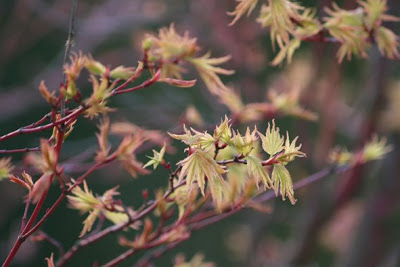 Today my garden saw the first Acer leaves for 2008 unfurl… 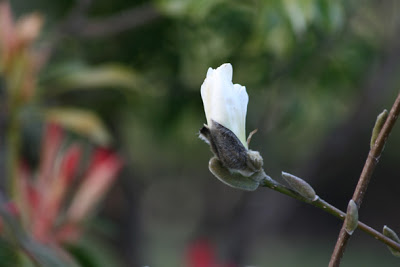 It also saw the first white glimpses from a few magnolia buds. I had to go in for my camera! Ah… the tulips are almost about to open too. I am so looking forward to seeing them flower especially as they begin my colour theme for 2008! 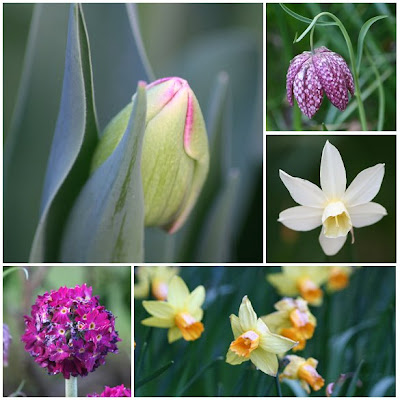 Isn’t it wonderful how a few hours of sunshine can transform the garden. Although if you look closely at the montage above you’ll see that the first of the drumstick primulas and daffodils are going over now – I guess the sunshine is responsible there too.

Today I managed a few hours in the garden. I ache a little now but I am sure I will sleep well tonight! We are to have a good day again tomorrow and then we can expect rain for a couple of days after that. My plan is to get some more planting done before the rain. I do love to change my planting schemes – that is by far my most favourite part of gardening. I’ll post on what I’ve been up to very soon.

Finally, on uploading the photos above I had a little look in the Nestbox while I was waiting. The light was going down and the Nestbox was almost completely dark but I could still make out a shape in the corner. Yep… the same corner as last night had our blue tit female tucked up in a fluffy ball sleeping. Excellent!! That’s two consecutive nights now. The Nestbox is still full of moss too. Oh yes… and I looked in earlier as I was preparing dinner and just missed the male visit with dinner for the female! Everything is moving on nicely now.

The photos above were taken in my garden on April 21st 2008.

10 thoughts on “Some warm sunshine”