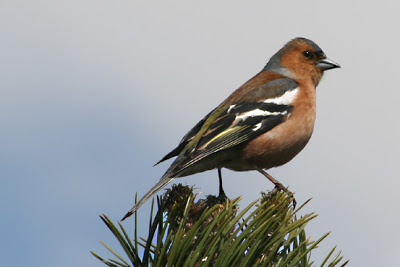 Watching the behaviour of visiting garden birds can be quite entertaining – most of the time! It can also tell a story of what is going on if you look more closely. So let’s start with the male chaffinch below who seems to have adopted the top of my small pine tree, which is directly opposite the entrance to my camera nestbox approx six feet away, as a song post.

What is he singing about? Is he just happy or is he looking to impress the ladies? Mm… there are certainly a good number of male and female chaffinches visiting my garden at the moment. This chap has really caught my attention as he sings his little heart out even when I am out in the garden too. 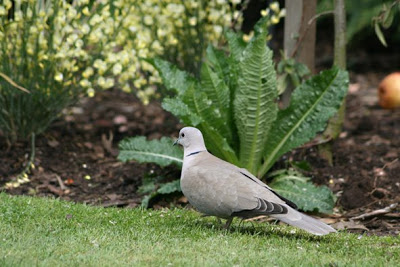 Most birds visiting my garden will be already paired and I do believe that the collared dove, that has been visiting alone, is now bringing its mate. They usually feed on the ground but sometimes go to the tables too. Mm… I wonder if we will see juvenile collared doves visit at some point. Yes, once you start spotting some pairs you will see there are quite a few. 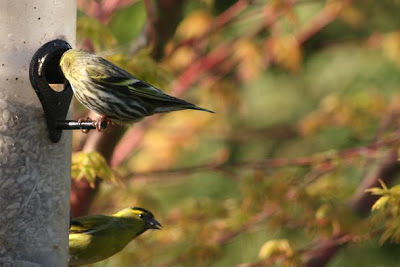 Once paired, the male birds do appear to always be on lookout when they feed together as you can see with the siskins above. I am guessing the male understands his role of protecting the female even before she lays eggs. I am also guessing that they have some sort of internal clock (probably related to weather temperature) to tell them when to mate.

It was certainly a bit warmer last weekend and as I brushed my daughter’s hair looking out the window we spotted the very quick ‘moment’ between this pair, or another pair of siskins, on this Acer tree. Let’s just say my daughter was quite vocal about it! So we could see juvenile siskins in the garden again this year. 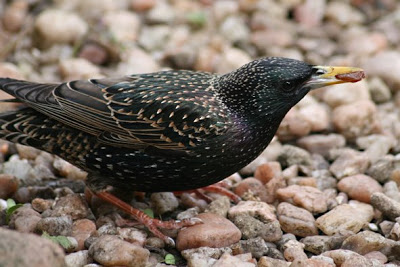 Nest building is well underway with the blue tits using my camera Nestbox – I plan to post an update with video footage in a couple of days. However, I have been watching for blackbirds collecting material too in the hope that they might use the Nestbox I put up especially for them. I’ve seen no signs at all with blackbirds but I have seen starlings collecting short stems of dried grass around the base of my ornamental grasses. Of course today when I was out with my camera they were only to be seen refuelling with sultanas! 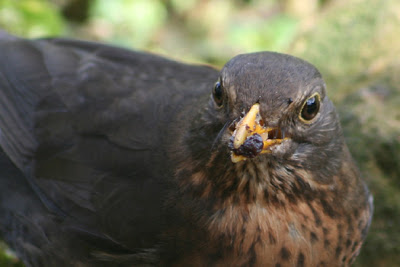 The blackbirds were also enjoying the sultanas today too. But wait a minute. If you look closely they aren’t just eating them… they are collecting them! They are collecting sunflower hearts too. I watched them fly off with mouthfuls of them. 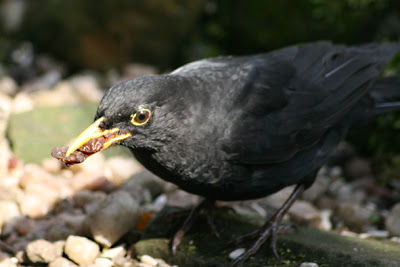 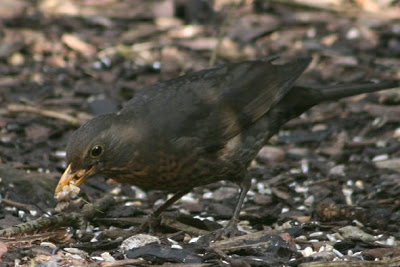 After watching this last year I now know this is a classic tell-tale sign that there are chicks somewhere, perhaps close-by, waiting to be fed. Well… there’s a surprise! Okay, not all is lost for my Nestbox as Blackbirds do have more than one brood per year so perhaps a pair will find it for next time.

Blackbird chicks are great to see in the garden – but then again the blackbirds are one of my favourite garden visitors. I love to see the feathers of the chicks go through the colour changes from fluffy brown to smooth black. However, they won’t be the first chicks in my garden this year. The first chicks I have noticed in my garden for 2008 belong to the dunnocks. 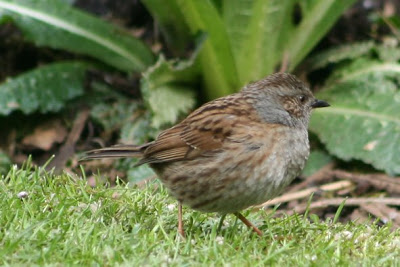 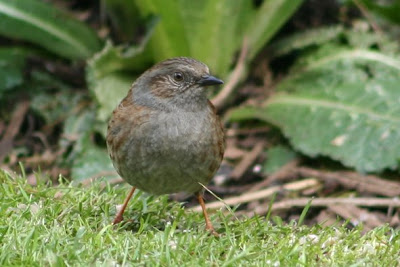 For a few days now I have been watching three juvenile dunnocks play follow my leader round my plants. The one in the photos above was out on its own today. I hope the others are okay. Again, what a pretty little bird this is. I have to say that although I am absolutely amazed to see the variety of colours of the finches that visit my garden I am becoming a big fan of the less colourful birds.

Finally, I should perhaps point out that the birds in my garden are at different stages of nest building than those in other parts of the UK. We are approximately two weeks behind much of England. However, you may still find it interesting to watch out for the tell-tale signs in your garden. It is fascinating to see.

To see more photos of the blackbirds taken today without sultanas in their mouths go to this posting on my birdphotos blog.

All photos above were taken in my garden on April 29th 2008.