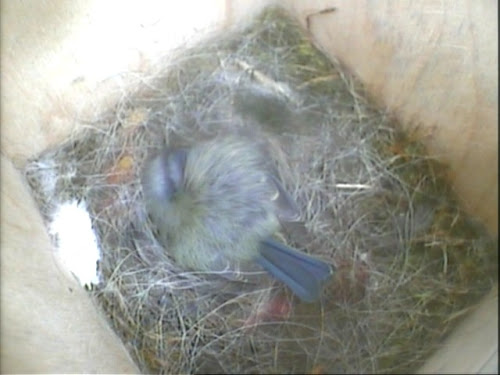 As I suspected the count of blue tit eggs in our Camera Nestbox stopped at eight. I know of other Nestboxes with a few more but I am hoping that having less mouths to feed will help the survival of all chicks. So now that incubation is underway how does the female pass the time?

Day-time naps are one way of passing the time during the incubation of the eight eggs in the nest. Interestingly the female began incubating before the last two eggs were laid. 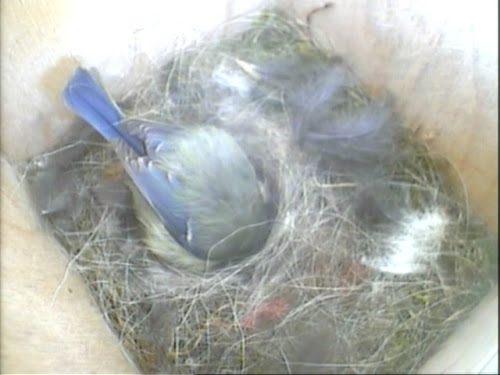 Digging in the nest is another. I guess she is looking for any unwanted bugs but I suspect she is likely to turn the eggs at the same time. The nest cup is really getting quite deep now with firm walls. 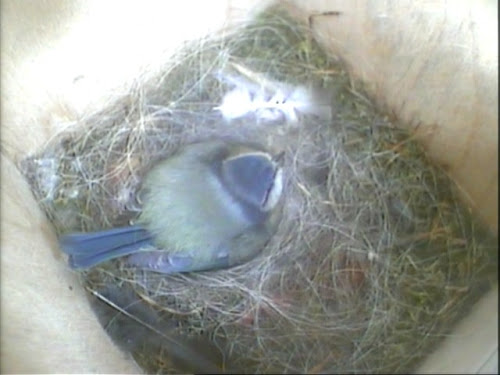 Patiently waiting for food deliveries from the male is another – although she does tend to call out for food too. Her call is quite quiet so I don’t know how the male actually hears her. Of course sometimes he doesn’t… 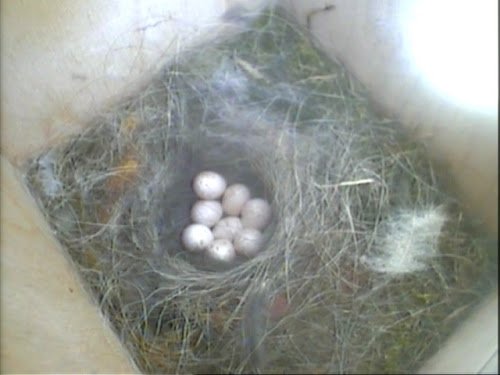 So out she goes leaving the eggs for a short while. Sometimes she covers them up but not always. I have seen this pair feeding at the feeders together and flying from branch to branch in and out of my garden. I expect that they will be enjoying this freedom as whenever the chicks come they won’t have any free time at all! Sound familiar? 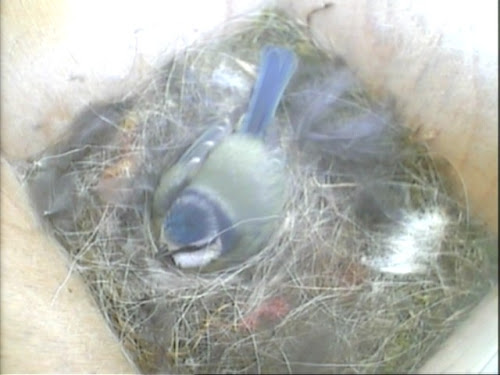 Before any naps and after any digging in the nest as she settles in the nest cup she looks like she is moving about to get more comfortable. However if you look more closely at her movements you will see she is repeating a rocking movement. What she is actually doing is turning the eggs with her feet. How clever – she is making sure all sides of the eggs keep warm!

Okay, I’m sure you would rather see all this activity for yourself. Below I have a video compilation of the highlights from the last few days with some still photo captures too. So what can we expect this week? Well, I’d say more of the same with the female perhaps leaving the nest less often.

What would I like to see this week? I would like to see the blue tits discover and eat the dried mealworms that I put out in a feeder last night. I was told by someone at the RSPB last year that they don’t recognise mealworms as a food. However I have seen other nestboxes where mealworms have been brought in to feed the chicks. Last year in desperation I put out live mealworms when the chicks were dying to help the parents in their endless search for food. They didn’t take them and the dunnocks and blackbirds went away with mouthfuls.

I am estimating it will be another ten days or so before the eggs begin to hatch so I am hoping that the resourceful blue tits will see other birds taking the mealworms and then try them too. So this week I am hoping to see the male bring mealworms to the female in our Nestbox. I believe this source of food could be vital in the survival of the chicks if there are no caterpillars at the end of the month.

Argh… I have just opened the curtains to see the new feeder I put the mealworms in getting a bashing by the starlings. It claimed to be suitable for small birds and the ledge and area to eat from is small. However, the starling has a long beak and is gripping on for dear life and although slipping off also is still managing to knock the feeder about enough to get some out and knock the rest to the ground where others are running frantically around waiting. It is 7.50am and the feeder is empty! The container that I bought is also empty as I put the lot in. As the starlings are absolutely relentless in their greedy quest for food I will now need to remove that feeder from where it hangs. I hate to think the noise they made early this morning too. My planting of climbing roses are plan A to help feed the young chicks and this was plan B. I guess I will have to work on plan C now!!! Perhaps I should consider adapting the fat cake guardian as at the moment they cannot get in there.

The photos and video shown above were taken from my camera Nestbox this past week.