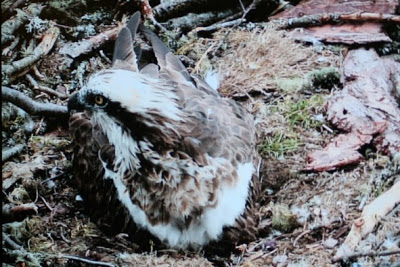 What are the chances of just passing by a wildlife reserve just ten hours after an Osprey chick hatches? I wouldn’t call myself a ‘real’ birder but certainly enjoyed the vibe as everyone gathered around the TV screens that were showing live footage from the nest.
After seeing people taking photos from the screen I tried too. Below you will see my best efforts. They capture the moment at least. Strips of bark are to the right of the Osprey if you are wondering! In the photos you can see the eggs and the chick. I have added purple arrows to show the location of the ‘hours old’ chick. 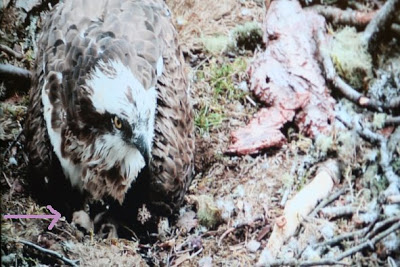 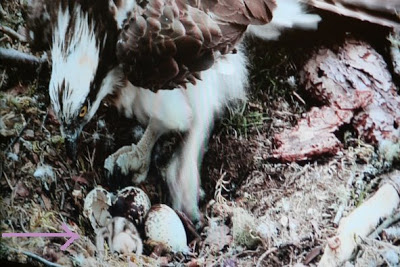 In March we visited this reserve when I was looking to capture photos of the red squirrel. We were told then that strong winter winds had blown away a good section of this osprey nest and a member of staff had climbed up and rebuilt the lost section sitting in it to ensure it was stable – I wonder if they caught all this on camera! I suspect this wasn’t an easy climb either.

Below you can see the nest after its rebuild on March 22nd. The second photo shows just quite how high up this nest is. Both photos were taken from the higher of the two hides on the edge of the Loch. I used the zoom feature on my camera for both shots. 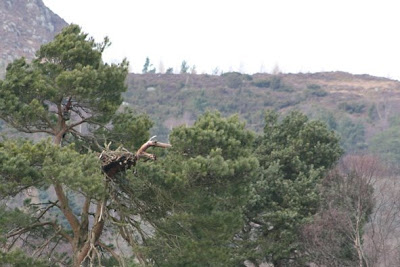 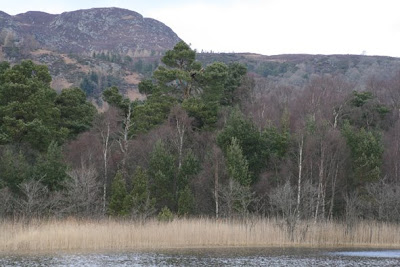 This is a Scottish Wildlife Trust Reserve . There are two webcams with the other on a Blue Tit nest box which has chicks being fed in it at the moment. They also have three videos from last year of the first Osprey egg being laid, the first chick hatching and the male bringing a trout (fish) to feed the chicks! See this page for links to the videos and diaries from previous years.

What I should perhaps point out is that if you visit this reserve you should be aware that the car park is small as is the visitor centre itself. However there is a viewing window for birds which will include sightings of red squirrels, pheasants and woodpeckers as well as garden birds.

Ah… but I have to say without a doubt, based on my two visits with different staff working, that this is a very friendly and welcoming place to visit. There is a small shop and although there isn’t a café but there is a machine to make coffee, tea and hot chocolate – which we did enjoy! 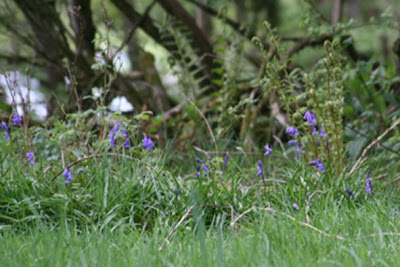 Bluebells are what led us indirectly to this reserve on Sunday. We had been considering joining a ranger led walk to bluebell woods nearby. However, when we got to that car park it was clear by the way people were dressed that this was perhaps more for the walkers than a gardener with teenage daughter and a new video camera to test!

Sadly my video camera, of a few years now, broke just after recording some hedgehog activity in my garden last week. So the only bluebells I caught on camera were those seen on the brief walk from the Reserve Visitor Centre to its car park on the way out. Ah… but I did get a chance to try out the excellent zoom on this camera. I only wish I had my tripod with me as the footage I captured is not good enough to share.

Finally, there is so much I could post on at the moment from juvenile birds visiting to no birds visiting courtesy of an invasion of starlings!! Ah yes… and the hedgehogs visits too – my new camera caught some interesting footage last night! I am also planning revamps of my garden including my gunnera border, turning my greenhouse round, taking down my very tired and rotten shed and replacing it with a long awaited wonderful ‘potting shed’ very soon. I will post when I can. I am so glad that the first chick hasn’t hatched in my Camera Nestbox yet. I am expecting to wait another week yet for that. Ah… the garden, birds and wildlife are definitely not dull!

The first three photos of the Osprey on her nest, the bluebell photo and the video were all taken on May 18th 2008.