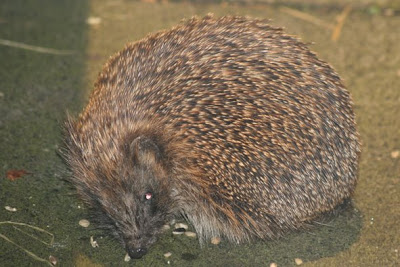 There has been plenty going on in my garden recently but with the school holidays there has also been plenty going on elsewhere too! Time at the PC has been short and sweet so I do apologise for not answering all my mail and comments or visiting my favourite blogs – I will soon. Oh… and I have so much I could post on too. 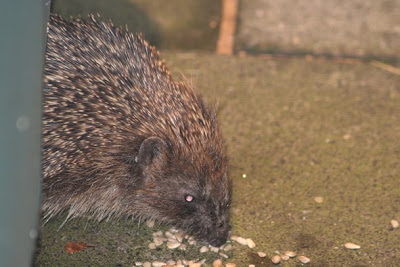 Hedgehog visits to gardens at the moment are just so special when you see them that I just have to start with them! This post is entirely dedicated to this wonderful night time visitor. It has seen a decline in numbers here in the UK in recent years which is most likely due to loss of habitat.

The photos above were taken last night and I do believe this is a new visitor to my garden by its timid behaviour. I don’t usually put out sunflower hearts but when some spilt I added a few more on the ground. This hedgehog was very keen on them and didn’t even look for any other food. I put more out tonight and guess what – this hog came back for them again. He did go to the entrance of the feeding box but it didn’t go in.

So how do you know if a hedgehog is visiting your garden? Well, perhaps you could look out for its droppings in your borders, lawn or garden paths. They are usually black as you can see in the photo above and much larger in size than those of garden birds. I haven’t seen any hedgehog droppings since the end of May but even so at the moment I do have regular hedgehog visits to my garden. I’ve seen and heard them! I know my regular visitors from America won’t see or hear this so this post is for you too.

What noise does a hedgehog make? If you were to stand quite still outside on a quiet evening once it gets dark you might hear them shuffling through dried leaves, grasses, ground cover plants and shrubs. You might also hear them make a snorting sound as they forage for food. I will be honest here and say I have never heard this in my garden – so far. However, they can also make a much, much louder noise.

What is the loud noise a hedgehog makes? One evening last week I went outside and completely stopped in my tracks. Initially I didn’t associate the loud scrapping noise at all with the two hedgehogs I eventually noticed in my garden. I walked quite close to them. To my surprise it was coming from the larger of the two hedgehogs – I think. My first thoughts were that it was being territorial and was warning off the smaller hedgehog that regularly visits my feeding station. I was expecting a fight. Oops… I was well of the mark there!

Since then, I have discovered it was more than likely that a male hedgehog was attempting to mate. Now, I have to say I am not sure which one was which now. The larger hedgehog repeatedly took a few steps backwards and forwards towards the smaller one from the corner edge of my house. The smaller hedgehog moved around the larger one before finally walking away into the night. It seems that this behaviour can sometimes last hours – without success as the female hedgehog looses interest and leaves. A cheeky comment is so very tempting here!! Anyway moving swiftly on I wonder if the female was the smaller hedgehog? Oh… I really wish I had gone in for my video camera that night. Since then I have been watching and listening but alas no sightings. I did have videos to share but they are now unable to play due to flash.

What about a feeding station? Oh… I have to say that I have found this a great way to feed and see hedgehogs. I love to watch them walk in it especially on a wet, windy or cold night. I have made mine by turning an almost clear plastic storage box upside down. I cut out an entrance at one end (13cm x 13cm). I have a standard double pet dish with crushed peanuts and sultanas in one side and water in the other. The dish is positioned opposite the entrance. I also have a second dish and on dry nights I put it nearby so we can get a better view of them outside too.

Where to put a feeding station? Mm… I have put mine near my back door where I first saw them visit. It seems to have worked for me. I have noticed that they do appear to remember where the food is and go straight there. I have also experimented by putting food nearby on the ground outside the feeding station. I have a basic infra red camera fixed to an old tripod which I position around my garden and we have watched these visits. I have noticed that although there is food outside the feeding station the hedgehogs will often follow the edges of my house wall and go straight in the box and not bother looking outside. I guess it probably feels safer in there.

How do you get the hedgehog to go in a feeding station? My method is really pretty simple. I just leave a little trail of food outside and they eventually follow it in. There are at least two that visit mine but just in case any other hedgehogs pass by one evening I still put a trail outside the entrance. If the hedgehogs don’t take this food by morning the blackbirds, dunnocks and robins will. The trail I usually make is less than shown in the video above. There was a little wind that night and the skins of the peanut blew about and for a while one stuck to the hedgehog’s nose! I love the way it slide along the ground trying to get rid of it.

What do hedgehogs like to eat? Insects, beetles, worms, slugs and snails are most likely to be what brings the hedgehogs to forage for food in our gardens but water may attract them too. Also I would suggest that if you have hanging feeders for birds it is quite likely that peanuts and sunflower hearts that drop on the ground below may also attract them. However, the slugs too are also attracted to the sunflower hearts as you can see from the photo above taken last night!

What food can you put out for hedgehogs? Well, they do enjoy meat based dog and cat food however in my garden I have continued to put out the foods that I first discovered them feeding on – sultanas and peanuts (not salted). I did try dried dog food and dried hedgehog mixes last year but they weren’t too interested in them. However, recently I put out some pieces of broken and whole digestive biscuits and they have been popular too with both the hedghogs and slugs!

Watching the wildlife in my garden has been a challenge. In order to post about my videos and photos it often requires some research first. For the last week or so I have been collecting pieces of video and photos. I have also been most surprised by what I have seen and heard. The next photo is no exception. 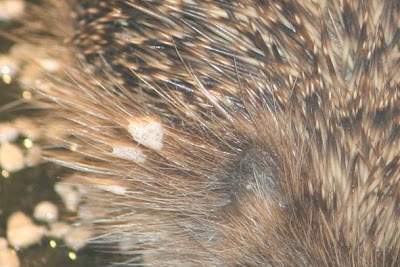 I originally thought the hedgehog above had sunflower hearts in its spines until I looked closer. Then I remembered something I had read on another website about hedgehogs spitting on themselves:

“Yes, hedgehogs do spit on themselves, but nobody really knows why. Hedgehogs will lick a rock or a piece of wood to start the saliva flowing. Then they swing their heads back and forth, spitting freely. Hedgehogs use their tongues to coat their spines with the spit. This startling behavior may continue for twenty minutes.Some animal experts have ideas about the spitting. Some say the saliva the hedgehog produces may drive away predators. Others believe it attracts hedgehogs during the mating season. Still others say the saliva works against parasites (PAR uh syts)—usually ticks, fleas, or small worms—that feed on a hedgehog’s body.”

Incredibly I had just taken a photo of spittle on a hedgehog! I really must say once again that in writing this online diary I have discovered some fascinating facts about what goes on in my garden. I am now certain we have two smaller hedgehogs taking the food I put out and at least one larger one. I wonder what the chances are of seeing very young hoglets at some point. I’ll finish off this post with photos of the smaller hedgehog (that enjoys the sunflower hearts) during its visit tonight. 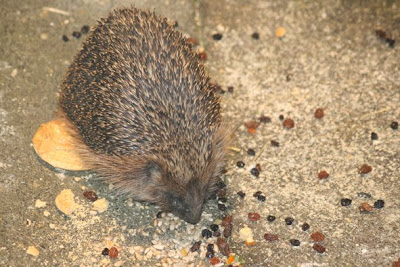 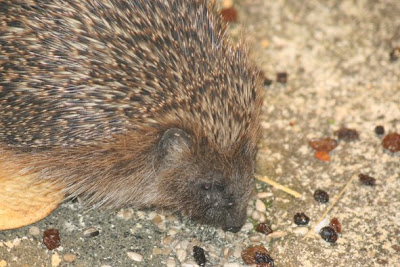 Wishing you a great weekend in the garden. We have an interesting job to do this weekend so fingers crossed the rain stays away for a little while.

All photos were taken through a window with outside lights on. I also used the manual focus setting on my camera to reduce the time the flash was used.

11 thoughts on “Comings and goings”