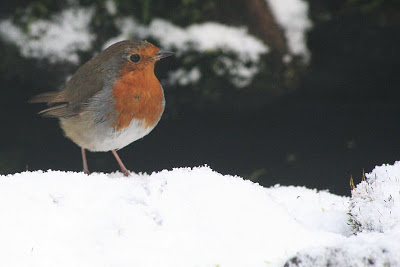 I’m thinking red – especially apples. How about orange – but not an orange? Ah… I’m on a roll now. How about a chestnut brown but… yep you’ve guessed it – not a chestnut!

Just as light came up this morning our overnight frost got a gentle dusting of snow on top. It transformed the garden very quickly into a winter scene complete with this little chap below who was making his presence known around my small pond this morning.

Three robins are regularly being seen around the garden at the moment. One does get chased off so I am guessing seeing as the other two seem at ease with each others presence they may be a pair. I wonder if anyone can tell me why the Robin is said to have a red breast – it looks pretty orange to me. But hey… it really does look well with the white snow and I think he knows it too!

The red apples on my obelisks really do add a bit of colour to the garden as well as a great food source for the birds. They are especially popular on cold days like today. In fact the whole garden was going like a fair today! You could be fooled into thinking there was a special offer out there. Everyone came by, including a small flock of Starlings and a Jackdaw.

Numbers of Chaffinches have seen a big increase and the Siskins were about today too. I also believe my mystery guest flew by my window but still no photos to confirm this one. Like Trisha, I had a job walking away from my window this morning!

I have been scanning (not literally) the birds that I see buzzing about the garden since the middle of December looking for a chestnut colour. This morning I was thrilled to spot it! She was clearly waiting until the snow arrived to make her entrance – knowing full well her chestnut cap goes so well with both the white of snow and the red of apples – she being the female Blackcap. Welcome back my dear… 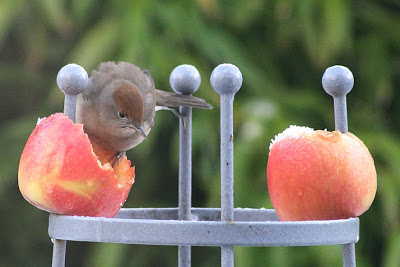 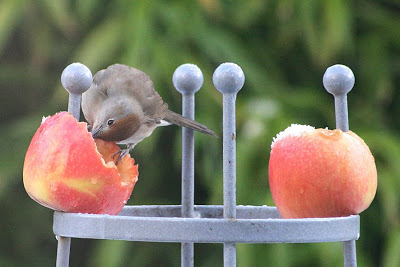 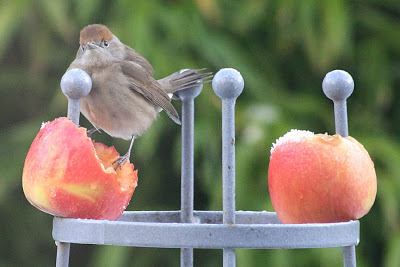 The male does have a ‘black cap’ and is a bit more aggressive than the female. Two years ago we had a male and female and then I suspect a Sparrowhawk got the female by some feathers left behind. Last year we had two females but no male and they stayed much longer and fitted in much better with the other birds feeding alongside them happily. I was hoping a female would return – I have mixed feelings about the male though. Perhaps they aren’t always aggressive with other birds.

So, as you can see it was the apples that drew in the Blackcap today – just as they did last year. You can also imagine that, with their red colour against a white garden, they would be easily spotted by any birds flying over it. The first year it was a fatcake that caught the eye of a male Blackcap and they both enjoyed that – there were no apples up then. 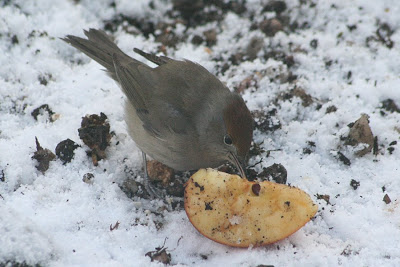 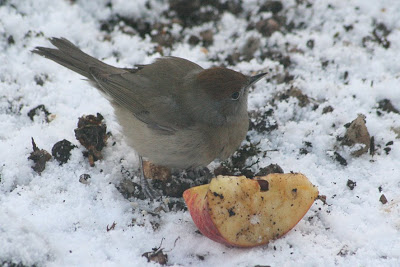 Today the female Blackcap even discovered the little tray feeder inside my small Acer with sunflower hearts and crushed peanuts in it. If I were to make a guess – she might one of the females from last year. She certainly went straight to it and it is quite hidden. Mm… maybe I’m joining the dots too far with that! However, she ran around the ground just below my window – attracted to a quarter slice of apple I’d thrown there early this morning. You can see in these darker photos how tricky her chestnut brown cap is to see in lower light levels. This is a bird, from previous sightings, that is out early with the Robins, Dunnocks and Blackbirds.

Oh yes… I wasn’t the only on to see a female Blackcap this morning either – Trisha saw one too! Amazing… we are at different ends of the country and there we were watching exactly the same visitors arrive on the same morning. Both thrilled about it too! This really is a fun time to be watching the garden. Yes… it is covered in snow I grant you, but the activity on top of it is quite magical too.

Finally, I am aware of how the voting is going in my poll regarding frequency of postings and here’s me going against it. It is only the current activity that has me posting daily at the moment – don’t worry I won’t be keeping this up on a regular basis. I completely understand that some postings can be missed this way. Just in case you haven’t been by in a few days you might want to see some Wren photos and some Long-tailed tit photos taken over the last few days. I’ll get the video camera out when I can. I wonder now what tomorrow will bring to my garden.

All photos above were taken in my garden on January 5th 2009.

13 thoughts on “What goes with white?”