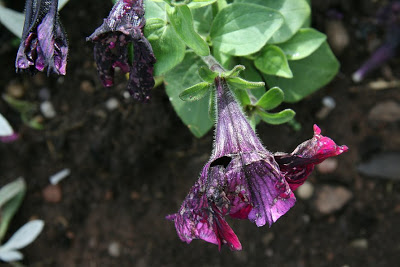 The video below shows a little repeat footage from last week followed by some from yesterday morning including one of a few blasts of thunder. For those who can’t view the video, my tiny pond completely flooded right out and along the paving. The birds were at the feeders and can be seen getting absolutely drenched …I had real difficulty in recognising a Great tit at the peanut feeder!

The seed feeders often ‘run dry’ on wet days. As the birds were still visiting them and looked such a sorry sight I waited for a slight break in the volume of rain dropping from above and ran out and topped them all up.

During this relatively small time frame of a reduced rainfall the excess water around my pond drained away as if by magic! Yep… this does show the importance of adequate drainage in the battle against flash floods.

Another sight met my eyes this morning… the sorry sight of damaged plants after heavy rainfall. Petunias were the first casualties I spotted from my kitchen window.

My heart then went completely out to all the gardeners that have spent so much time and care in raising bedding plants from seed… what sorry sights their gardens must have been this morning. I am vexed for them.

A brief early walk around the garden this morning revealed only a few casualties so I am not complaining myself. Although it is always a shame to see new plants to the garden take a battering like the tiny Erodium below. Mm… I must get the fine grit I bought at the weekend mulched around these plants. 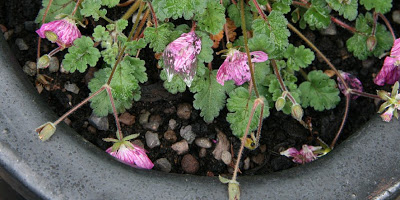 The rain washed almost all the colour out of the rose below which was a beautiful deep burgundy. The weight of the water almost brought it right to the ground too. 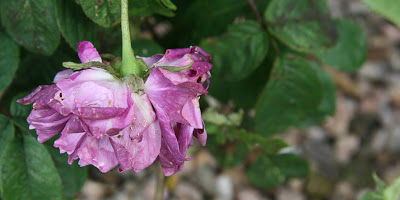 Other plants in my front garden have flowers that can easily lose a few bells and still look great like the Penstemon below… the only evidence of the heavy rainfall of yesterday is in the few petals scattered on the ground below it. 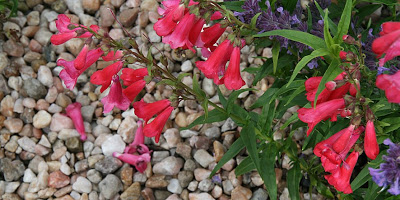 Walking around my back garden and taller stems of the bell Campanulas are now leaning forward towards the edge of the border. Raindrop markings on the white petals can also be seen. Yes… white flowers do seem to fair the worst with wet. Madame Alfred Carriere also took a hit. Ah… but what was this I spotted?

A bit too early perhaps but among the golden foliage of the Bowles golden sedge grass I spotted the first flower buds of the year on another white flower that is very popular in late summer… the Japanese Anemone. I do love these white flowers. Yes… a bit early. 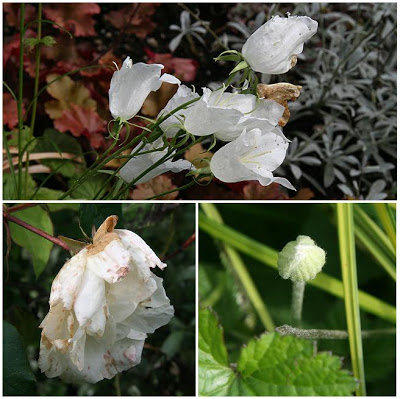 Almost singing out to me in the cool light of day this morning were a couple of Clematis at my back boor. They were almost defiant of yesterdays rainfall! Niobe is sharing a trellis with Alfred but I thought the second clematis below was also Niobe (a cutting I had taken) but the petals seem to be slightly different… Mm… strange that. 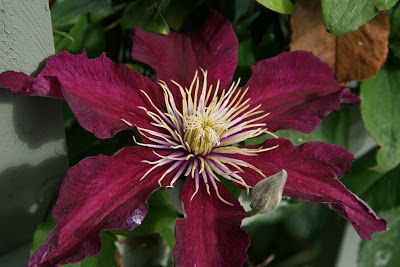 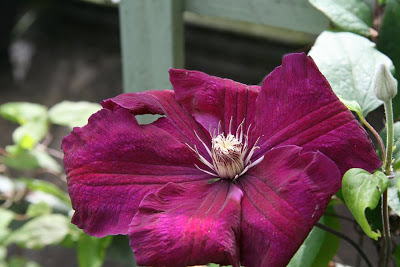 Walking back out to my front garden and I pass by probably the sorriest sight in my garden after yesterday’s rainfall… my pot of Lollo Rosso lettuce. Aw… I wonder what I should do with this now. Perhaps I need to cut back leaves to allow new ones to grow back. It really is a pretty plant and tasty too! 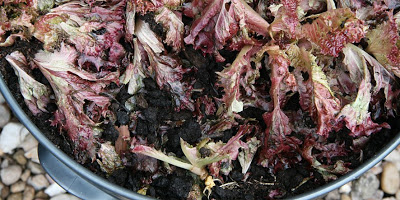 So yes, it’s now a clean-up operation in the garden … trimming back damage to promote new growth in the plants. I’ve a few other garden jobs in mind for this week too… much more fun… I’ll come back to them!

Here’s hoping, you haven’t sustained too much rain damage in your garden (or house) this time or at any other time. Perhaps you have the oppposite problem with water shortages and fires. As gardeners we have always challenges to face and climate change is really up there in the list!

9 thoughts on “A sorry sight…”