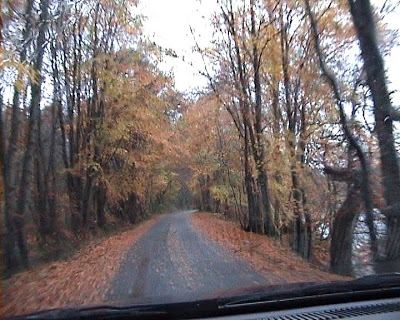 … an Autumnal Sunday drive. Let me take you along small countryside roads that I have travelled many times over the years… my Granny (Grandmother) used to live around here.

The leaves won’t last much longer on the trees up this way with more heavy rain and strong winds forecasted. I hadn’t planned to video parts of our journey (look out for birds crossing the road) but as I had a ‘willing’ camera girl (daughter) with me….

For those unable to view the video here is a frame grab from the video below. I have to say, yes it was on the main a miserable day but with the reflections through flooded parts I do think it had a magic too. I love driving along this road… except in snow and ice. I don’t ‘do’ winter roads!

Okay, our road was going somewhere today… we were heading for one of our favourite destinations for a drive. We were heading for the SWT Loch of the Lowes. The rain got quite heavy as we arrived in the car park. Now, the big question was… would the birds come to the feeders?

Rain didn’t hamper activity at the feeders at all! In fact there was even more activity than usual today. Chaffinches were helping themselves to peanuts with were put out for red squirrels. Woodpeckers enjoyed peanut butter. Siskins enjoyed niger seeds and a Treecreeper briefly visited a feeder too before scampering up the tree so very well camouflaged…

The end of the video above showed a brief clip of branches with Rowan berries. There was a good reason for including that. When we arrived at the visitor centre the staff and a few visitors were standing at a window looking out with binoculars. There was a bit of a buzz…

Fieldfares, Redwings and a Bullfinch had been spotted feeding at these berry laden branches! It was tricky to see them clearly with the light levels on this dark damp day but even without binoculars I spotted them come and go.

Raindrops running down the windows made filming through them impossible. But hey… it just goes to show rain doesn’t hamper birds when they find a good source of food. It was great to see the excitement these visitors caused in the Centre.

Most of the UK was to be wet today and the weather predictions are for a wet and windy week ahead. However, if you’ve been looking out on to your garden feeders today I’d expect you had birds queuing up!

Yep… rain doesn’t hamper garden birds. Mm… rain I’ve also noticed in the past doesn’t hamper birds of prey hunting either… watch out for Sparrowhawk visits this week too!

Finally, I’ve had two people in mind behind this posting. Mary from Iowa, USA… this Sunday Drive is for you. Thank-you for your email, I will try and capture more images of Scotland for you.

Fellow blogger Helen is the other. I’d like to dedicate this posting to you and your family.

Update Monday 2nd October: In view of the title of this post and the images shown in BBC News this morning I feel perhaps I should add that rain did hamper many parts of Scotland over the weekend… in fact it caused havoc! We were very lucky here.

The BBC reports this morning:

“Heavy rain has caused havoc in the north and east of Scotland with many homes flooded and trains cancelled. More than 100 elderly people have been moved from their care home in the Aberdeenshire town of Huntly. Arbroath in Angus was left virtually cut off, with all main routes in and out – including the railway line from Edinburgh to Aberdeen – impassable.

The centre of Stonehaven in Aberdeenshire was under water after rivers burst their banks. Desperate residents filled pillow cases with sand from the beach to try to protect buildings, after the rivers Cowie and Carron burst their banks. Some streets in the town were evacuated.”

No doubts, a clean-up operation in all areas hit will be in force today. Preparations to hold back further rainfall expected later today and for the rest of the week will be beginning but once river banks have burst their banks that is a much bigger task! This must be an awful time for so many from residents to services and pets to wildlife too.

Perhaps birds respond to severe weather too and yesterday’s weather triggered the appearance of Fieldfares, Redwings and a Bullfinch at the Loch of the Lowes Visitor Centre. Perhaps our gardens may see unexpected visitors this week too. 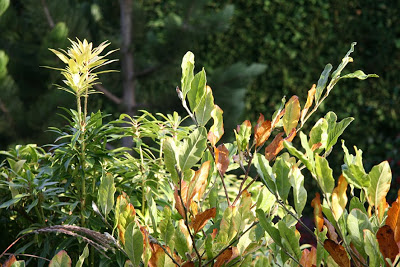 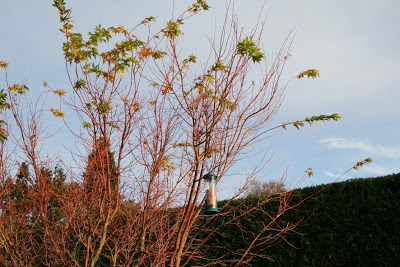 This morning my garden has seen early sunshine and winds although the winds are picking up now and as you can see above the leaves are leaving the trees! The geese are flying over just as usual although I do suspect some of the fields they’d usually visit will have some flooding.

Here’s hoping all flooded areas will get some wind and sunshine to dry them up a little before the next downpours fall. Finally, the rain and winds won’t just be hitting the UK. Here’s hoping it isn’t too bad where you are. Stay safe… especially when driving.

The video of our drive (thanks go to my daughter) and the footage at the feeders (taken through Centre viewing window) were taken by on November 1st, 2009 on the road to and at Loch of the Lowes Visitor Centre.

Video uploads with movement aren’t as successful but as the moment was more important I have posted these ones. The photos above were taken in my garden on November 2nd 2009 unless otherwise stated.