Oh, but… I really wonder how many trees were planted both in the UK and outside in the exact same hour (between 11am-12 noon GMT on December 5th 2009). I wonder… if a world record was ‘planted’!

Now… have you heard of the expression ‘best laid plans’? Well, that about sums up my contribution… read on for my story! However, if you did successfully take part here’s what you should do next…

Tree O’Clock was an event organised by BBC Breathing Places here in the UK. In order to determine that a world record has taken place ‘proof of planting’ is now required. If you have taken part do remember that there is a deadline of noon on Friday 11th December for adding your tree/s. Some records are already in… Congratulations Northern Ireland!

In one email, you are asked to tell the organisers how many trees you planted and what type/s they were. You are asked to provide a full postal address and postcode of the place of planting. Finally, most importantly, you are asked to attach one photo of your tree/s to your email. You can find a link to preformatted and addressed email here. Scroll down to the ‘Proving’ section.

So what happened in my garden? Well, everything was in order. Sapling collected… tick. Photo of garden centre crate for posting… tick. Posting published to support the event with event links… tick. Planting spot picked out in the garden… tick. Thursday night…. time slot for Saturday clear. Friday morning… time slot for Saturday gone. Plan 2 went into action.

Plan 2 was to be a first for my garden… I was going to plant by proxy… my husband was going to plant his very first plant while I was out. The plan was he would mail photos to my phone so I could see how it was going. I really liked this idea for my contribution.

To cut a long story short, my plans changed. I didn’t go out… until I discovered I didn’t know what tree my sapling would grow into. Plan 3 was a very quick dash to a garden centre. We arrived to a brass band playing Christmas Carols… but there was no time to stop and listen.

A Hawthorn was the tree we quickly searched for. It was 11.10am now. There were three to choose from and I picked the one I guessed would be the largest I could get in my car. Negotiating the tree through the garden centre with doorways and people was tricky in a hurry… especially on a Saturday morning a few weeks from Christmas!

Getting the tree into the car wasn’t straight forward either as seats etc needed to be rearranged at speed. The clock was ticking all the while. My daughter was with me and was now questioning if there was time to plant it when we got back. I was ever optimistic… but knew it would be tight.

We were just a street away from home when we came to a stop with a learner driver slowly manoeuvring… in reverse towards us! It was 11.45 now. Fifteen minutes to plant my tree was going to be very tight.

Back in my driveway the tree came out of the car more easily then it went in. Next… a quick dash inside to get my camera, coat and a key to my shed for tools. I quickly picked up a half bag of garden soil on the way to my planned planting spot.

My tree was going in an area that had a gravel mulch. A quick rake back of the gravel revealed dryer soil even though it was raining. Although I took out a spade it wasn’t necessary for me to use it for digging a hole. Instead I intended using it to dig up a pot of bamboo that had been sunk into the border to keep the roots from becoming invasive. 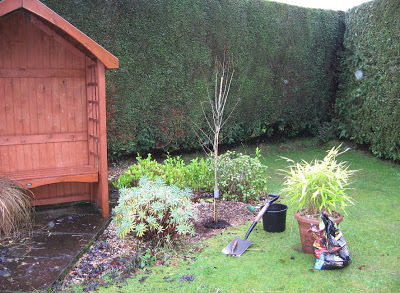 With a hand fork I broke up the bottom and sides of the hole to give the roots of my new Hawthorn tree a better start. This tree fitted perfectly into the hole with space around it. Now… in my hurry I almost forgot to take photos! I was also worried about using a camera in the rain and you can see raindrops in some of my rushed photos. All the time I was running back and forth between planting and taking photos I kept an eye on my watch… and the time.

11.54am… my tree was in the ground! Soil was quickly poured on top. I lost some soil when I tipped the pot to get the tree through a door at the Garden Centre. The extra soil in the hole was pushed gently, but firmly, down into the gap between plant and planting hole…. a quick dash for another photo! 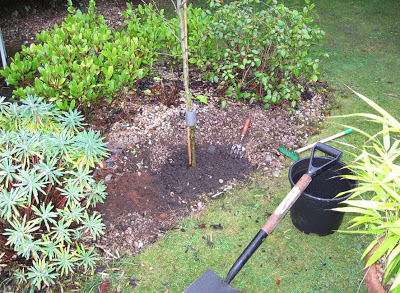 Gravel raked back, tools moved out of the way and at 11.58am the job was done with a photo showing how this new tree fits into my garden. Phew!! I actually made it in time. I was delighted. 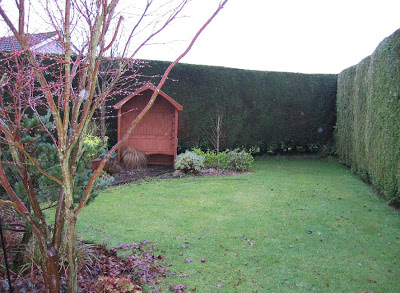 So I did it… yes? Not quite. After a quick run out in the rain to see my planting I showed my OH my photos. Before he even uttered the words… I guessed what he was going to ask. I put my head in my hands. I meant to check this too. I looked down at my photo in the viewing window with him. We looked for the time… it read 1 hour later than it was!! My proof of planting wasn’t valid.

Okay, so Tree O’Clock won’t be receiving an email from me by Friday with an attached photo and I can’t claim to be part of this tree planting record attempt… although I was. However, my garden is a Hawthorn richer and I’ll look forward to seeing it with blossom next Spring. In future years insects on it may help support chicks in my nestboxes too.

I could consider this Hawthorn as my Christmas tree for this year too but I already had another living tree planned for decoration in my garden. Later in the afternoon the rain stopped and I went out into the garden once again… this time with a box of silver baubles. It wasn’t Christmas Carols from a Brass Band I was entertained with then. Nope… it was Christmas Chatter courtesy of House Sparrows and friends! 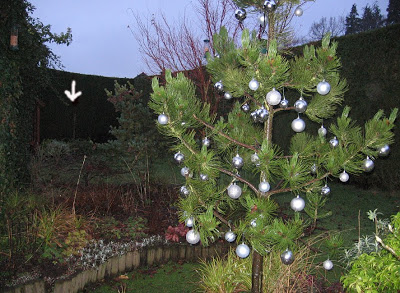 The arrow in the photo above indicates where my Hawthorn was planted and you can just about see the network of trees birds have in my garden.

As my back was turned and I went up and down my small ladder House Sparrows went out and in my hedge to a bird table. What a chattering they did as you can hear in the video below. It was taken around 3.45pm and the sound was almost deafening. It could stop so quickly too when I made a noise with my ladder. Their silence didn’t last long though!

Perhaps the chattering birds were preparing to roost early for the night as it was getting dark. They continued chattering as I went inside. I found myself thinking that in future years they will bounce around the branches of my newly planted Hawthorn. Although my planting was a tad rushed it was still fun and…. I always enjoy a challenge anyway.

Now a bigger challenge is when I say ‘to cut a long story short’… I keep too it!!

8 thoughts on “I wonder how many…”