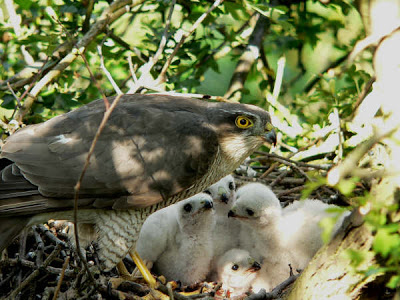 Blogging is a great way to e-meet so many interesting, like-minded and passionate people. Sometimes these first meetings are through browsing or comments on postings and other times via email. VP’s actual meeting and interview posting with a local garden designer (great read by the way) jolted a memory yesterday.

Back in August last year I had been briefly chatting via email with Dave Culley about doing of an interview style posting on him. The timing wasn’t quite right (for either of us) and although this was my idea to be honest I wasn’t really sure how I would tackle this. His wildlife filming (in my opinion) is outstanding and I wanted to do a good job in raising his relatively unknown profile. His passion? The one bird that most people in the UK dread visiting their gardens… the Sparrowhawk!

First contact with Dave was back in December 2008 when he emailed me:

I spend all my time watching and filming wildlife in my garden just like your self, but I have the elusive Sparrowhawk nesting in my garden, and if they are about its a good thing as it means the garden bird population is high.

You would be amazed how many birds nest around the hawk nest for protection against other predators, they are fantastic birds and very caring parents.

I have spent the last 5 years studying these birds every day and have learnt more than people who have studied them for over 30 years as I more or less live with them. Bit of footage on my site you may enjoy.

Dave attached the photo above which he has allowed me to share. Okay… I know this bird will snatch birds from our gardens but looking at the photo above it is just the same scene that you’ll get from any camera nestbox with cute blue tit parents and chicks in it isn’t it? This bird will be a parent in the Spring too.

Following the link to Sparrowhawk Island given in his email I found to my delight that Dave has nestcams and not just in nestboxes too. He had some wonderful footage with outstanding clarity.

“Sparrowhawk Island is a web site dedicated to capturing live footage of many species of british birds, but mainly the sparrowhawk as it lives in the wild.

This isn’t your average online web cam site, our cams allow us to follow every aspect of the sparrowhawks life, whether its in the nest or the male bringing kills in. You will see the female leave the nest and take the kill away from the male to feed herself and her chicks.

We also have cams on our mating and courtship branch and of course a secondary cam trained on our watering hole.

The rest of the cams are situated throughout the wood in all of their favourite hotspots, this means you’re guaranteed a good show. “

In one of our email exchanges Dave attached a clip of birds bathing that I am certain my readers will enjoy seeing us much as I did. The bathers list includes a Robin, Song Thrush, Jays (being chased by a Magpie too) Blackbirds and the Sparrowhawk itself! All in woodland setting… just metres away from a Sparrowhawk’s nest! Amazing… very entertaining too… Dave added some music for this one. Most of his videos have no extra sound.

Having many live streaming cams does come at a cost to Dave. I know live streamming is something I would’nt be able to consider myself. He has a monthly subscription system operating so you can view any camera live. At the time of this posting the website lists this at a cost of £10/month. Alternatively donations are also appreciated. I should also mention that the live cams usually start up in March. I’ll email him to check dates for this year. Update June 2010, since this was posted Dave has secured a sponsor to live stream his cams. Excellent Dave 😀

My first thoughts at the time were, why I would anyone consider signing up for something where only a limited pieces of footage were available to judge the quality. I mentioned this to Dave at the time and there were legal reasons why only a limited number of clips could be shown at that time as (finally) David Attenborough and others were very interested in the very rare footage he had. However, he did pass me on a few links to YouTube clips still available.

The first is of a female Sparrowhawk settling down on her nest to incubate her eggs. I was absolutely transfixed by the beauty of the Sparrowhawk eye…

Close-ups of the Osprey feeding fish to her young at SNH Reserve Loch of the Lowes is what the next clip reminds me of. Yes, this is probably a bird on the menu but the main focus is on the group of white fluffy chicks and the same caring and careful way that she feeds her young… exactly like the Osprey.

Not so sure I enjoyed seeing Dave’s clip of a Sparrowhawk feeding (too real for me) but I did find it amusing when it was being annoyed by Magpies and Jays. This clip shows good views of this woodland life and once again shows images that many of us may never see. Okay… some of us might not want too, but nature is wild and this is what goes on.

What’s Dave up to now? Well, I’m not certain, as of this moment, but will mail him after I have posted this. I hope he is well and continuing to work in this field. Perhaps he has some good news of his future in wildlife filming as I believe he certainly has one. His passion for the Sparrowhawk is without question.

Back during BBC Autumnwatch Unsprung last year one, of Dave’s stunning Sparrowhawk photos (mating shot) was shown. Chris did mention at the time how much Dave knew about Sparrowhawks and being a big fan of Sparrowhawks himself they had already met. 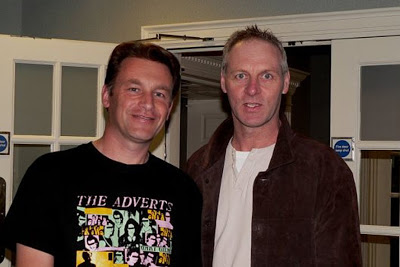 Chris Packham, left, with a startled Dave on the right 😉

Finally, fingers crossed that this ‘wildlife film team of one’ will get noticed. It would be such a shame for all the knowledge and experience he has gained of this ‘Most Wanted’ visitor to our gardens was never seen on our television screens. The Sparrowhawk could probably do with its profile being raised too.

Evening Update: just heard from Dave tonight and he tells me that unfortunately the swing bridge crossing over to Sparrowhawk Island has collapsed. On the positive side he has managed to get Lottery funding to replace it and works starts tomorrow. The Sparrowhawks will likely move away from the work site so understandably he will be anxious until they settle down a start nest building in a different area. Yep… fingers crossed there Dave!

Dave would love to make watching his nestcams free for everyone and has just applied for Lottery funding. He believes it would be great for schools to watch too. I would tend to agree.

At the moment, he is looking for a Sponsor and if this is something anyone reading this would consider you can contact him through his website. Alternatively you can email me and I’ll forward your mail directly to him.

Chris Packham has been giving Dave his support and I suspect not just because the Sparrowhawk is his favourite British bird! I’m guessing that Chris recognises the great work Dave is doing by studying this bird… let’s hope that others will do too and he gets financial support to continue his work. Yep… fingers crossed there too 😀

I’d like to thank David Culley for his permission to use his photos and include his videos in my posting.