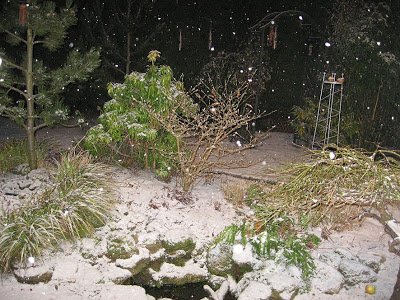 Were chicks being fed in my garden this morning? At just 20 seconds between repeated visits to a ground feeder one bird actually had me considering this! Well, very briefly anyway. So what bird had me transfixed by its speed and efficiency in finding food… the Starling perhaps? Nope…

The Coal tit Parus ater shown in the video below is the smallest European tit. They eat insects, beech mast, seeds and nuts. What I was fascinated to see this morning was it being selective in the food it was taking from the feeders…

During our long spell of snow I had bought a seed mix. Argh… the snow is back again tonight!! We’ll just ignore it.

With such a brief time between visits to the feeder the Coal tit definitely didn’t have time to eat them. Was there more than Coal tit visiting then? Nope… think squirrel 🙂

Yep… Coal tits hoard food for harder times… especially when food is plentiful at the feeders as it was today! However, this tiny bird isn’t quite as smart as it seems. Despite finding a variety of ingenious and odd (pushed into a lawn) places it is believed that the Coal tit doesn’t remember all the locations in which they hide food.

So, at 20 seconds between visits today’s Coal tit was hiding his cache quite close. I watched at the side of the window to see where it was heading. I then went out my front door, quietly opened my garden gate and stood to the side very still.

I watched in fascination (without cameras) as it made a few more trips into the ivy growing over my pergola. I was only able to see one location it was hiding the seeds but I’ve remembered where it is and will be fascinated to see if it returns there to retrieve them.

On browsing tonight, I discovered that although the present status of this bird’s population isn’t a problem sadly they do suffer when a winter is harsh. Fingers crossed that we don’t see a drop in population with this winter being the coldest winter we’ve had in many years.

Perhaps I’ll get myself/it a small bag of black sunflower hearts for its very own feeder. I’ll hang it a bit higher up too… there was a prowling cat today. Now, I wonder if this same bird will return again tomorrow. Oh yes… and I wonder if it will be able to find the ‘feeder’ it visited today…

Finally, I wonder if anyone else has been seeing this at the moment too. No, not the snow! I’m guessing I can’t be the only one. We’d all love to hear your stories. Oh, just one more thing… although Coal tits nest in holes in trees, rocks, roots or in the ground… they will also use nest-boxes! Now, wouldn’t that be great to see 🙂

The video and photo above were taken in my garden on February 3rd 2010.