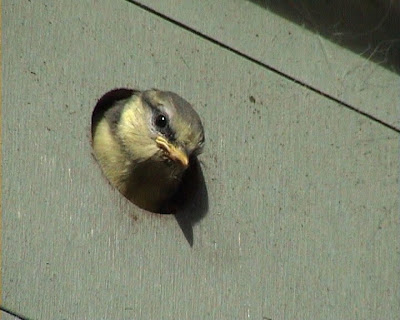 Perhaps it’s a bit on the warm side to be sitting at a computer browsing garden blogs when you can be outdoors enjoying your own garden just now. Gosh… isn’t everything growing so fast just now? Weeds too of course 😉

Don’t you just love that expression to describe young children growing up and getting taller… growing like weeds! Well, I guess you could say that’s what happened to the Blue tit chicks in our nestbox too 😉

It is ten days now since they all successfully fledged and we have never seen any Blue tit chicks being fed by parents or visit the feeders to even speculate that this was our family. Ah well. Mm… but I do have one mystery! I’ll come back to that after some images taken just a few hours before the first chick fledged.

This time, I’m not going to give you any video info. I’m certain it will be much more fun for you to watch that way. I wonder if you’ll guess what happens next…

Videos are no fun though if you can’t view them so below you’ll find a few frame grabs from the video. They came out surprisingly well. I only gave them a little sharpen in Photoshop too. Oh yes… I couldn’t resist some captions 😀

Hello there… what’s going on out here? 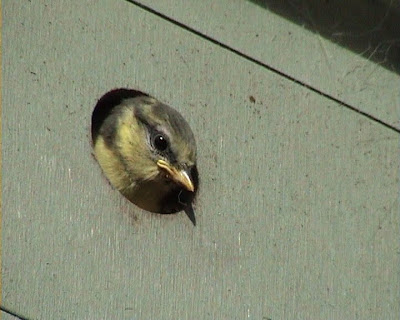 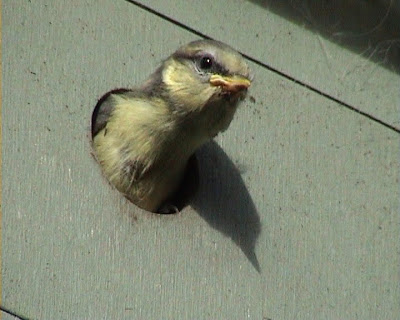 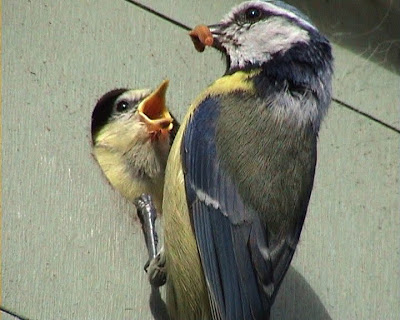 Thanks, Dad… I’ll have my mealworm al fresco! 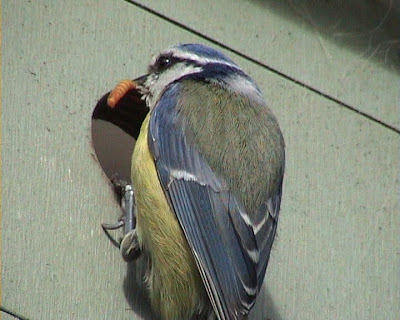 What fun the chicks were to watch during the last full day they were in our nestbox. I’ve made a start on sorting the footage taken from inside our nestbox that day and will post it as soon as I get it sorted. Meanwhile… back in our nestbox now… 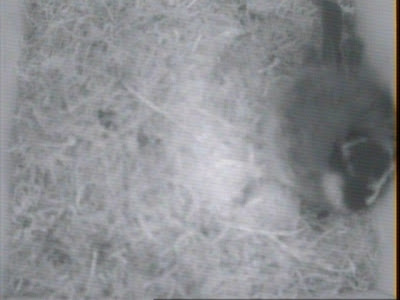 Yep… what an unexpected surprise! Two nights ago, purely by chance, I discovered our nestbox had a rooster in it! This is not a time of year we usually see birds roosting in there either. My first thought was for the health of this bird as the nest was bound to have parasites. I watched for it to open out of its sleeping ball shape and was soon to discover it was a Blue tit and a slightly scruffy looking one at that!

Yep… my first question was the same! Could this possibly be one of the chicks that fledged from our nestbox? Was it likely at all that this could happen? I didn’t think so. I asked around on forums but got no replies. Perhaps this wasn’t the first night this bird has been roosting in our box.

By the next evening, I had decided that seeing as I knew for sure there were no eggs left in our nestbox I could safely remove the used nest. That way if the rooster returned that night it would be a cleaner place for it. I scattered some wood shavings on the floor of the box so it wasn’t completely bare.

Did this rooster return? Yes it did. It appeared slightly confused with the new flooring too but eventually settled down fine and went to sleep. Tonight it is back again. It is still looking a bit scruffy but there are no signs of the yellow beak of a chick. However, I have no idea at what stage the yellow beak changes. 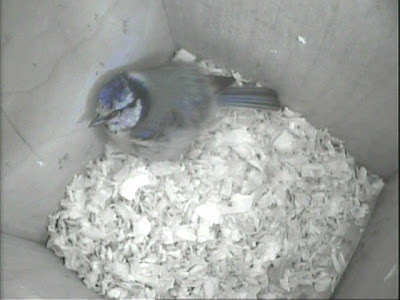 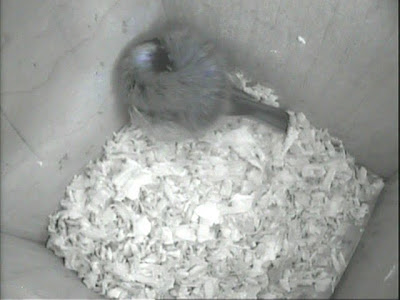 So there we have it… a new garden visitor mystery! Just when I’m preparing for my summer break too… do you think it knew this? Lol. Although, I do have one little nag as I look at the photos and video of this rooster. It’s one of the eyes. It looks like the lid doesn’t stay open easily/all of the time. Mm… that was something I noticed on one of our nestbox family chicks! I’ll have to ask around again on this. Have you ever heard of a fledged chick returning to a nestbox?

Finally, I just want to add some advice on cleaning out nestboxes as given by the RSPB on their website:

“The nests of most birds harbour fleas and other parasites, which remain to infest young birds that hatch the following year. We recommend that old nests be removed in the autumn, from August onwards once the birds have stopped using the box.”

Please also note that there are laws protecting eggs in nestboxes:

“Unhatched eggs in the box, can only be removed legally between August and January – and must then be disposed of.”

To clean your nestbox the RSPB suggest:

“Use boiling water to kill any remaining parasites, and let the box dry out thoroughly before replacing the lid. Insecticides and flea powders must not be used.

If you place a small handful of clean hay or wood shavings (not straw) in the box once it is thoroughly dry after cleaning, small mammals may hibernate there, or birds may use it as a roost site.”

However, as I’ve said earlier… summer is not a time I’d associate with roosters. Has anyone any ideas/suggestions they’d like to share? This really is a curious one especially if this is one of our chicks roosting. I still can’t see it being one of them though.

On the other side, I am delighted that our nestbox is providing a safe place for this Blue tit to roost for now. I wonder how long it will stay. That’s me for tonight… way too late in posting once again!!

All video and nestbox images above have been taken in my garden during June 2010.