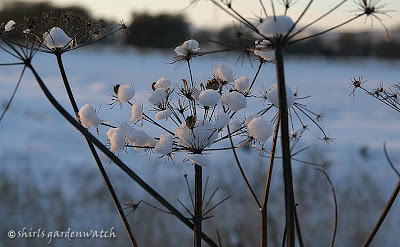 Let’s start with a walk shortly before sunset last Saturday. Back then, the gentle light snow decorated the landscape artistically. It blended in beautifully with the warm tones of Autumn. However, soon Winter was to seriously take charge. 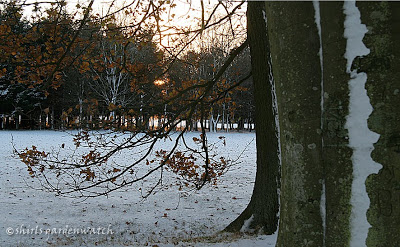 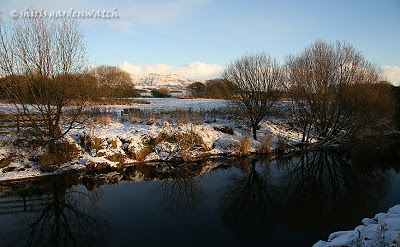 Clicking on all images in this post will enlarge them.

Overnight and into Sunday saw more substantial snowfalls. The artist, also known as nature, was using a thicker paintbrush now.

My garden is on the East side of Scotland and on Sunday the major disruption and chaos on the roads began. I should stress that the end of November is not a time for snow to normally cause a problem here.

Schools etc have been closed all week which is a first for any winter. My husband couldn’t drive out of our street to get to the major roads but if he did he would only have found them closed. He became a stat in the many who have worked from home most of this week. I can confirm he has more than worked his hours too.

On Sunday, my husband and daughters were not just held up in the first of this unexpected chaos on the roads but then found themselves with thundersnow when they finally reached their destination in nearby City of Perth.

Prior to this we had never known of thunder and lightning in a blizzard. My daughter missed her train but fortunately got the next one which took the journey very slowly as the lightning was affecting the points on the track.

Meanwhile, back in my garden I kept myself busy by making a snow feeding station for the many birds that were arriving in my garden. I thought I’d try another bird feeding experiment.

Chaos of a different sort could be found in my garden. You might also say there was some major disruption too. Instead of thunder and lightning, Starlings had begun their week long invasion. 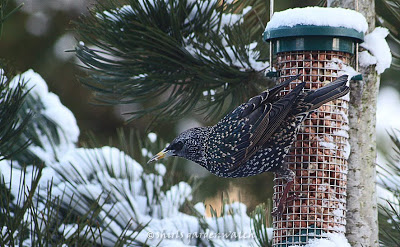 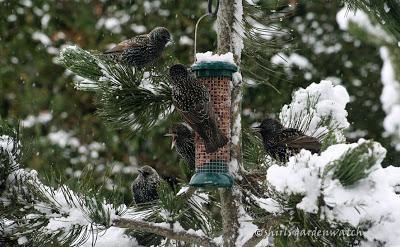 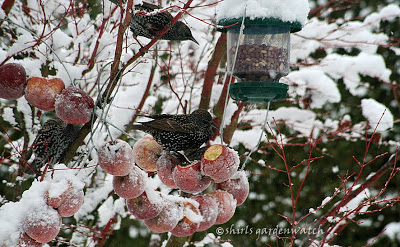 After looking out at Starlings all week,
I’ve decided they look pretty stunning in winter.

Yep… Starlings have posed, squabbled and eaten from all feeders they could cling on to. To my surprise they have also been very, very keen on the apples I put out especially for Waxwings. Few apples are left now.

Also seen enjoying these apples this week have been, Blackbirds, Robins, Blue tits, Chaffinches and Goldfinches. Taking a guess at numbers there has to have been 30-40 Starlings visiting. Chaffinch numbers have increased too perhaps reaching 20-25.

Starlings, although on the endangered list and needing help, aren’t always welcome in gardens due to their rowdy, greedy behaviour. However after seeing so many this past cold week, I am warming to them.

I’ve noticed that although Starlings fight over food like Blackbirds, unlike Blackbirds they do work as a team also. I have enjoyed watching their behaviour.

Moving in to the week, Monday at 7:30am, you can see that we now had a deep snow carpet covering the garden. It looked seasonally pretty with soft artificial lighting. 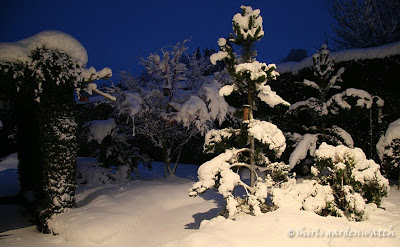 However two hours later, in the harsher cold daylight, the real picture was quite different. The artist, known as nature, was using oils and a palette knife now. 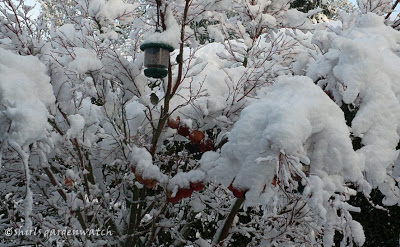 Hungry birds were attempting to fly from feeder to feeder but many were hidden. Heavily snow laden branches made it difficult for the birds to land near them too.

The sense of urgency from the birds to find food was easily seen. I scattered seed in a variety of places to help. I knocked snow off branches and feeders I could reach too.

I also spread the feeders around my garden rather than all birds going to the one area. However, with the high numbers of birds now arriving in my garden no feeding area was quiet.

Like the queued motorists struggling through snow on the roads the birds were queued, struggling, cold, hungry and impatient too.

Sunshine, and blue skies by lunchtime saw Starlings and other birds preening and soaking up what warmth there was from the sun perched on my neighbour’s cherry tree that overlooks the garden.

The artist, known as nature, has a delicate brush now and enjoying colour and light. The picture has a bit of calm now. 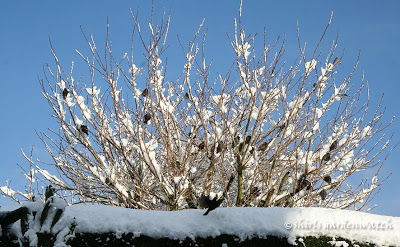 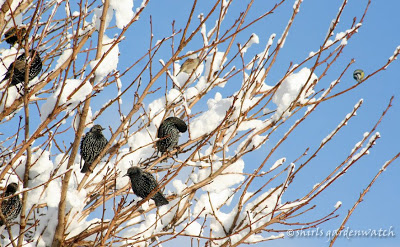 This is a very popular tree for the birds that visit my garden. Note, above right, the tiny Blue tit is eating a sunflower heart. Blue, Great and Coal tits often take food to eat up there.

Just a two hours later and it’s a serious business in the garden once again. Now the birds try to eat as much as they can in order to have enough energy to keep warm and alive overnight.

There is no time to waste. Soon orderly queues won’t be in operation. Light is going and the cold night to come is creeping in. 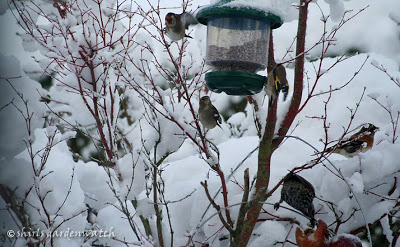 Wait a minute though… a new bird visitor had also crept in! I nearly missed it too in the medley of birds. You’ll see this new visitor on the right of the photo above.

This was one on my ‘realistic’ bird visitor wish list! I am delighted to say that Bramblings have arrived in my garden 🙂

What a treat this has been to see them. I don’t know how long they’ll stay and they don’t stay all that still when they visit but I hope to get some clearer photos of them before they go. 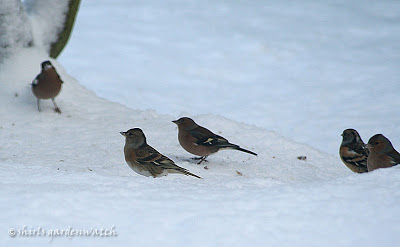 Getting views of the Chaffinch is much easier. A male is in the close-up below on my bird bath that I’ve temporarily converted into a feeder. Positioned below a window I have access to cover the food when the snow comes on.

As to be expected the quiet, the calm images of the Chaffinches and Blue tit to this make shift feeder are only occasional ones. Starlings and Blackbirds squabble here too. 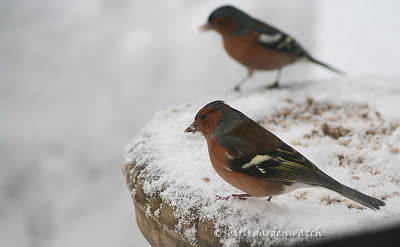 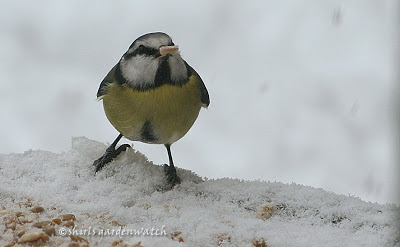 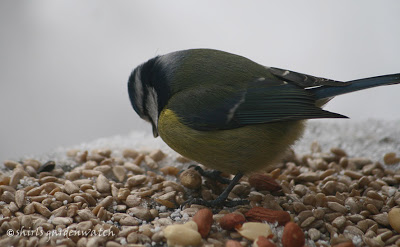 This pattern for Monday, has been repeated all week long (including more snowfall each morning and throughout the day). Other birds visiting my garden this week have been Blackbirds, Robins, Dunnocks, Great & Coal tits, House Sparrows, Greenfinches, Goldfinches, Siskins and Woodpigeons.

Sparrowwhawk visits, I hadn’t seen this week which has been quite a surprise. However, right on cue as I am typing this, one just flew into the cherry tree that had been full of birds at the time.

The birds in the tree made a quick, safe exit and the Sparrowhawk was left all by itself looking around almost bemused. I suspect it is trickier for it to catch food when there are such large groups of birds. A collared dove arrived just after, good job the Sparrowhawk didn’t see it.

So how much snow do we have? I’ll be honest, I have not been out with a measuring tape. Suffice to say that the only measure I am interested in is that of the height of my Wellies (Wellington boots). It is right to the top in most areas of my garden so careful steps are required.

Taking a sweeping brush to my Greenhouse roof was also necessary as I was concerned that the weight of snow up there might do damage. Nearby, our satellite dish also got the sweeping brush treatment as the signal was going. I needed to dig out a spot for a ladder there.

Going back to last Saturday, when I tried building an alternative winter feeding station for the birds, I had no idea we would see so much snow. I might have altered my design a tad, however it has been successful. I didn’t take photos when I made it. 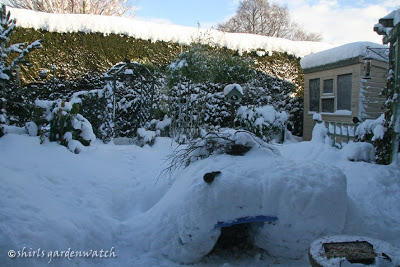 You can see it in my window view above. Notice to the bird bath feeder on the right too. I keep a garden skuttle nearby and place it over the food when the snow comes on again otherwise the birds spend too much energy trying to dig out the food.

So, for my tunnel I basically made an igloo type tunnel. I took a plastic storage box and filled it with snow, tipped the snow bricks out and built my tunnel. I then added the blue lids of large storage boxes from my shed as a roof. Blackbirds, Starlings, Dunnocks and Robins have taken the food from inside.

In the long garden view you can see the other entrance of this snow feeding tunnel on the left. You can also see where I have trudged through the snow to top up feeder and the Arbour in the distance. 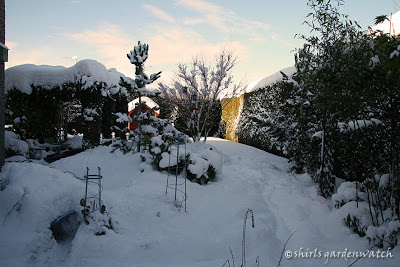 In the Arbour area, with the lunchtime Sunshine on December 1st , you can see an untouched carpet of snow. Long winter shadows too.

The artist, known as nature, has perfected the art of mood and atmosphere. 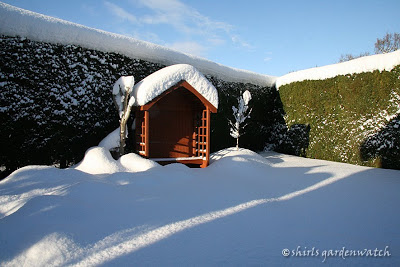 Perfecting the art of finding food in a garden has to go to the Starlings though. In a bid to spread around the food for the birds I re-opened Hedgehog Manor with an extensive buffet.

Needless to say along with Blackbirds and Robins, Starlings found fat balls, apple pieces, sunflower hearts and mealworms on offer. I have some video footage but as yet have only mastered editing photos and need more time to become familiar with the video options on my upgraded PC. 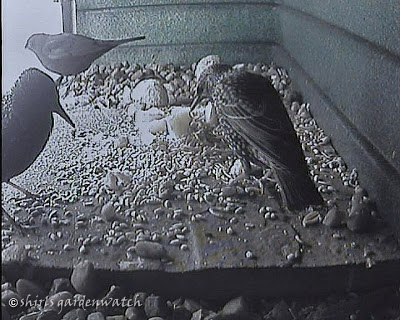 Finally, I’m at the end of this Winter update from my garden. Yesterday afternoon diggers finally cleared snow on our street and cars can get out. Now, we are seeing temperatures drop. It was -12 deg C when my husband left for work early this morning. It is trying to snow now and the temperature has increased to -4.

My hands are getting cold as I type this, I think (like you perhaps) I’m now in need of a warm drink. I think the heating has gone off too, I’ll be putting that back on 🙂

Before I make my coffee, I’ll head outside, with Wellies, coat and gloves on, to add apples to my obelisks and tree. Only three remain. I’ll also fill up any empty feeders and put out a buffet in both Hedgehog Manor and the igloo tunnel.

Much of the UK has had the disruption we have had (worse too I suspect). I can’t imagine how long the huge piles of snow from clearing roads and paths will take to go. Let’s hope this is not a repeat of last year’s long snow spell.

Wishing you a safe and warm weekend. Enjoy window gardenwatching if you can’t get out 😀

All photos shown above were taken in my garden during this past week.

44 thoughts on “A snow and bird filled week”