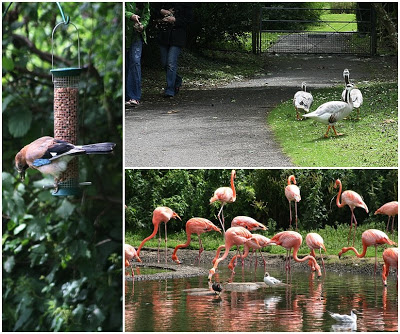 Mount Everest was where I arrived at last night! What a fascinating trip it was too. Don’t you just love those unplanned trips? Let me share this one with you. A great view awaits us. Don’t worry… we won’t get altitude sickness 🙂

We will begin our trip at Llanelli Wetlands Centre in Wales last July on a holiday visit. After a relaxing coffee in the Café watching birds feeding we’ll head out for a wander around the winding paths of the Reserve. Hold on to your paper bag of bird seed now… the rustling is like a dinner bell to the birds.

Jay at Cafe feeder, Bar-headed Geese being fed with seed,
Caribbean Flamingo with Moorhen and Black headed gulls.
From memory, The Flamingos were not to be fed the seed. 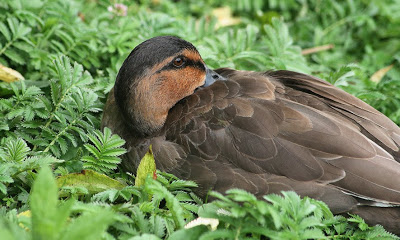 Philippine Duck taking time out in a quiet spot. 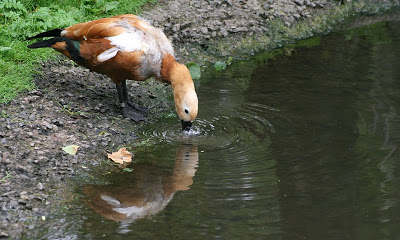 Ruddy Shelduck drinking. Molting perhaps or is it a Juvenile? 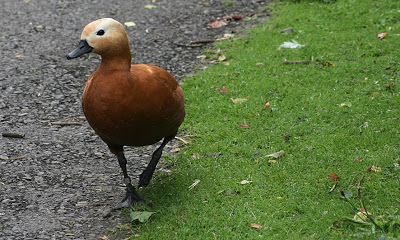 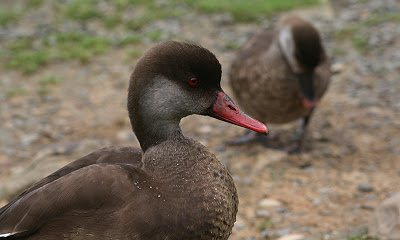 Red-crested Pochard run out the water to feed on seed.
Us squabble? You must be mistaken. 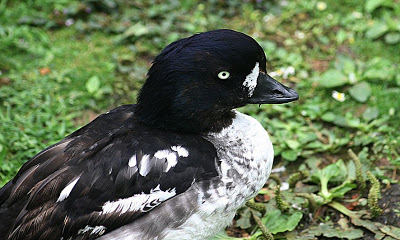 Barrows Goldeneye watches and wonders what all the fuss about. 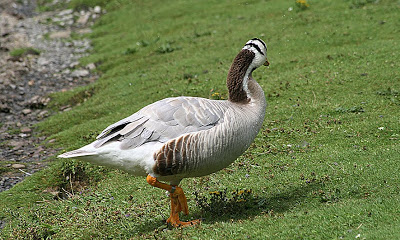 Bar-headed Goose, quick… the Pochards are back in the water. 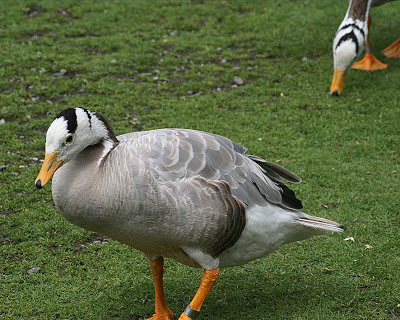 Bar-headed Geese, search out food missed by Pochards.
Don’t the bars on our heads look smart? Do you know our story?

Being honest I didn’t, and what a fascinating bird the Bar-headed Goose has turned out to be. I only wish I’d known this when I was taking my photos and watching it. As I’ve said before, although I chat about garden birds I’m not what you’d call a birder. I really am out of my depth with water birds and their ID’s 😉

Thanks go to Jan at the Birdforum for supplying (very quickly) ID’s for my photos last night. I always do a quick Google search on images after I get an ID and this one took me to a very sweet image of a Bar-headed Goose and chick. However it was the content of the article that really caught my eye.

Further searches took me to videos that I am able to share here below. I am delighted to have a couple of short clips from the BBC with Sir David Attenborough narrating fascinating stories of these birds. I’ll let you watch them and we’ll chat some more for those who can’t. Apologies to my visitors outside the UK if you get an error trying to play the videos.

This modest looking, Bar-headed Goose is extremely high-flying. Scientists now have a theory on how, when migrating over the Himalayas with a quarter of the oxygen available at sea level, they are able to do it.

I’ve found a variety of sources discussing this but many are a bit too scientific for me and most likely way to detailed for a blog post. I found the following article in Birdwatch explained it well:

“Bar-headed Geese annually migrate over the highest mountains in the world – the Himalayas – on their way between their breeding areas in China and Mongolia, and their wintering grounds in India. They fly at altitudes of up to 9,000 metres.” (30, 000 ft)

“Scientists from the University of British Columbia compared their physiology with that of Barnacle, Pink-footed and Greylag Geese which fly at low altitudes, looking for adaptations that enable them to fly in such thin air.

Their findings, published in the journal Proceedings of the Royal Society B: Biological Sciences, show that they have a higher density of capillaries around their muscles. These muscles also have between six to 10 per cent more aerobic muscle fibres than in other geese.

The team also found that the Bar-headed Geese’s mitochondria– the cell’s power sources – are distributed closer to the cell membrane and therefore closer to capillaries. These traits allow oxygen to be carried and diffused more effectively to the flight muscles.

These physical adaptations are found in Bar-headed Geese that are bred in captivity and have never flown, and must have evolved overtime specifically to survive and perform at high altitudes. They are also known to breathe more than most other animals do when oxygen is scarce. “

If you are interested in the more Scientific explanation you can find it here.

Where other birds migrate over a longer route around Everest and the Himalayas, the Bar-headed Goose takes the harder but shorter route over Mount Everest! It flies up there with the Jumbo Jets, it has adapted to this, and looks pretty impressive in the first video above.

My unplanned trip last night was fascinating as it unfolded. If you haven’t heard of this bird I hope you have enjoyed the trip with me. I now won’t look at images of the snow-capped Himalayas without thinking of the Bar-headed Goose.

I’ll also think of my daughters (in the first montage) where they were throwing seed to it before running off alongside it. Little did they (or we) know they were trying to out run a bird that could fly up at the height of a Jumbo Jet and over Mount Everest. Wow!!