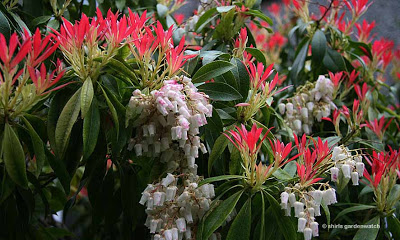 Garden captures were made from my garden on the 15th of the month to join others celebrating blooms that day. Perhaps it was fortunate I was late with my posting as yesterday a Press Release came in from the RHS which I’d like to pass on.

The RHS are concerned about the risk of holiday makers travelling overseas bringing back cuttings (with potentially new diseases) and suggest seeds are a much safer option. You can read the full Press Release further down this post. 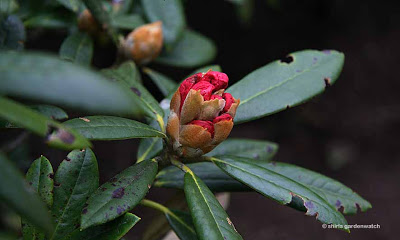 Briefly going back to my garden on April 15th shows everything was just alive with new growth. I do love this time of year. Following on from my previous posting about the Cuckoo flower we’ve also been enjoying Wood anemones, Fritillaries and native Primroses flowering in my garden which are blending wonderfully with other plants. They have been with us for a few years now. 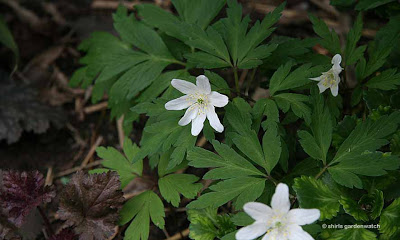 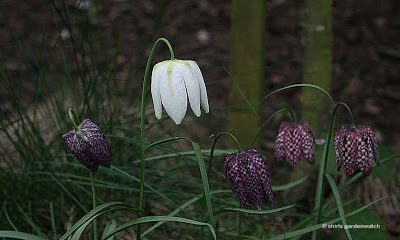 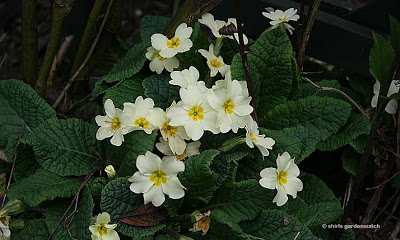 Red Campion has successfully seeded itself around two areas of my garden including the area below. No probs for germination with this plant then. A tidy up in this area at the weekend had some temporary lifted and potted up. I’ll come back to this area in a future posting but just to say a few cuckoo flowers and some primroses have a new home here. I’m loving the transformation 🙂 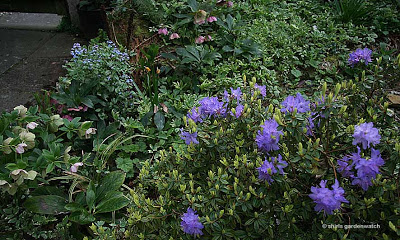 Back garden, behind gate, area under tidy-up

Coming back to garden wildlife, sadly we’ve still had no signs of passing hedgehogs. Although, the camera in my feeding station (Hedgehog Manor) isn’t showing images just now as I cut through the cable during a pruning session nearby. Oops… making enquiries about getting a replacement cable. 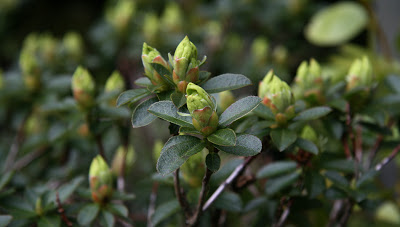 Re nestbox activity in the garden, not much to report there either. We still have a rooster Blue tit in the nestbox with a B&W camera which is pretty untidy with droppings after it being used throughout winter. Some moss has appeared in it though. In contrast we have a brand new clean and colour cam nestbox that I have agreed to trial for someone ready and waiting for tenants. 🙂

Looking up my book I see that nest material is largely collecting by the male Starling. I didn’t know that. He also builds the nest too which is a rough nest of grass and stems. I love this… it seems the male Starling likes to decorate his nest too with green leaves and flower petals!

Nice… although there is a good reason behind this nest decoration. He picks his decorative plants that have Insecticidal properties which probably protects the nest by killing parasites. I have heard that a number of birds will do this with different plants. I wonder how they know which plants to collect. 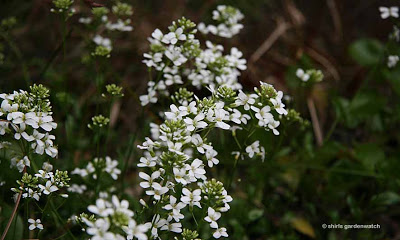 Nature is fascinating isn’t it? We can make just a few changes in planting and can help things along too. I’m thinking now about the plight of the Bumble bee in particular.

Just as I did with bird feeders (scattering them around my garden so birds passing through on different flight paths find them) I am now doing the same with plants in the hope that more bees and butterflies will find my garden as a stopover instead of a fly through. 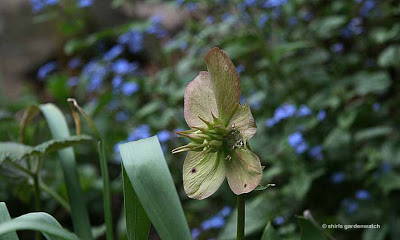 I’m thrilled to say that it seems to be working in my partially shaded back garden. I’ve seen a few bumble bees feeding and appearing to be looking out for a new home. There seems to be one particular spot in a rock cave around my small pond that is getting regular visits. 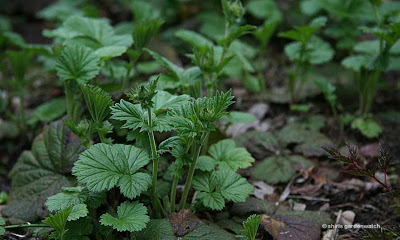 Also, the area getting the tidy up (mentioned above) is seeing a lot of interest too. I fear that perhaps one particular bee visiting there was interested in the hay protection over my Gunnera and I have just removed it so the plant can grow. I am finding it visiting all the time here especially in the evening when I am trying to continue clearing.

The ceramic Bumble bee nester was moved over to this area to help this bee out which seems very flighty in this area. I know nothing about bees behaviour but I might guess this is a queen in a panic trying to find a place to lay her eggs and it looks like I wrecked her plans. Oops. 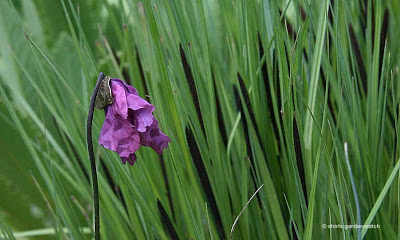 However on the flip side of my interference in this area bees can now get better access to the hellebore flowers that bob about furiously as this buff tail bumble feeds on them. I’m hoping these plants have enough clear ground now to self-seed and spread along with the primroses, cuckoo flowers and other wildflowers I could add here.

As the saying goes “You’ve got to break a few eggs to make an omelette” and I’m pretty confident this area will be an oasis for passing bees in a short time. The other side of the fence is open and sunny with catmint and other plants that are very popular with bees over the summer months too. Time will tell. This will be an interesting area to watch. 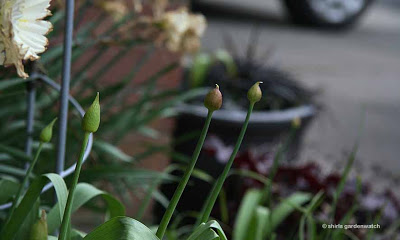 So that’s the garden watching update over for the moment. Let’s come back again to RHS advice/warning for gardeners travelling overseas over the coming holidays. It does make a lot of sense to me being someone that has had the New Zealand Flatworm in my garden for many years. I find very few earthworms when I’m gardening 🙁

Just one last thing, if you are going away for a few days, I’d like to wish you a safe journey and a good time 😀

“The Royal Horticultural Society (RHS) Advisory Service is asking anyone travelling overseas for their spring break not to bring back plant cuttings, even if the plant looks healthy.

The UK’s foremost gardening charity is concerned that if UK holiday-makers take cuttings from plants that catch their eye they may run the risk of bringing in a new pest or disease. In most years the RHS detects two or three new plant diseases and pests from samples submitted to its science department for analysis. Some, like the Fuchsia Gall Mite and Horse Chestnut Leaf Mining Moth, have become established and have the potential to spoil millions of plants.

“We don’t want to be kill-joys,” says Guy Barter, Head of the RHS Advisory Service. “But we do know of some gardeners who, on seeing a plant that is new to them, take cuttings and bring them home. Unfortunately this increases the risk of new diseases or pests being imported. Seeds are, on the other hand, much safer.”

The advice from the RHS is that holiday-makers should buy seeds instead of taking cuttings. In general UK citizens are allowed to bring back up to five packets of seeds from recognised commercial growers.

“There are a number of different ways that new pests and diseases could potentially reach our shores,” says Guy. “They can, for example, arrive on aircraft, on timber with its bark still on and perhaps through commercial imports of plant stocks, although stringent precautions are in place to make sure this does not happen. It is feasible that holiday-makers, bringing fresh plant material home, could inadvertently import a new pest or disease or even weeds. So with everyone getting ready for their holidays we thought we should remind people of the risk they take when bringing that innocent looking cutting back.””