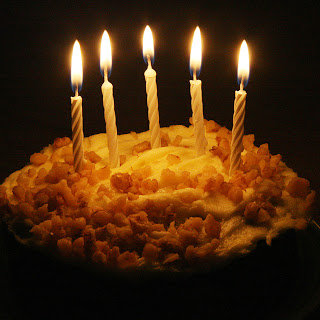 But first…. drum roll please…
and a cake for Carol at May Dreams Gardens to celebrate 5 years of hosting Garden Blogger’s Bloom Day! Thank-you Carol 🙂

I don’t imagine for one minute she expected this would still be running with the same enthusiasm from bloggers all around the world. Many from the early days are still sharing their blooms on the 15th of the month – congrats to them too. For newbies just pop over to Carol’s post for this month to read all about it – you might want to join in 🙂

Hellebores are my contribution to GBBD tonight (Yay… my roof tiles didn’t fall on them!) Although the two flowers that have opened were weighted down with heavy frost when I went out in the dark tonight to take my photos.

The montage below shows the next hellebore buds ready to burst open. My ceramic bumblebee skelp with leafy bergenia nearby also caught my eye sparkling with frost. I’d love if a queen bee decided to nest in it during 2012.

The main pic in this montage is of a Pieris in a planter near my back door. It was moved there about 6 weeks ago and it has been holding on to the blossom plumes since then. More exposed to the elements, time will tell if it will be happy there. I hope so as I’ve planted over 300 crocus bulbs in this area. 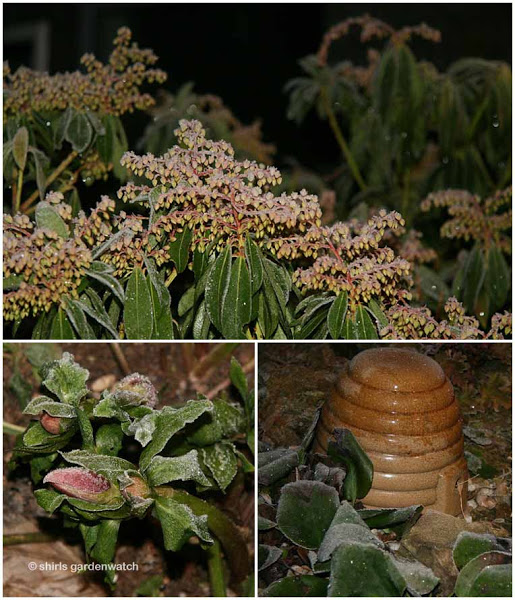 Today’s frost is the coldest we have had in a long time and usually that brings in many birds to the feeders. Mm… they weren’t that busy today.

December 2010 with its prolonged snow and cold spell brought large numbers of birds to the garden feeders. It also saw the first appearance of the Brambling which was wonderful to see. The Bramblings (both males and females) had followed large groups of mixed finches. I hoped we might see it again but without snow I wasn’t looking for it just now.

Friday the 13th wasn’t unlucky in my garden then… to my great surprise a male Brambling visited again! This time on a sunny day. I’ve only noticed the one and no females yet but since then it has become a regular which has delighted me greatly. 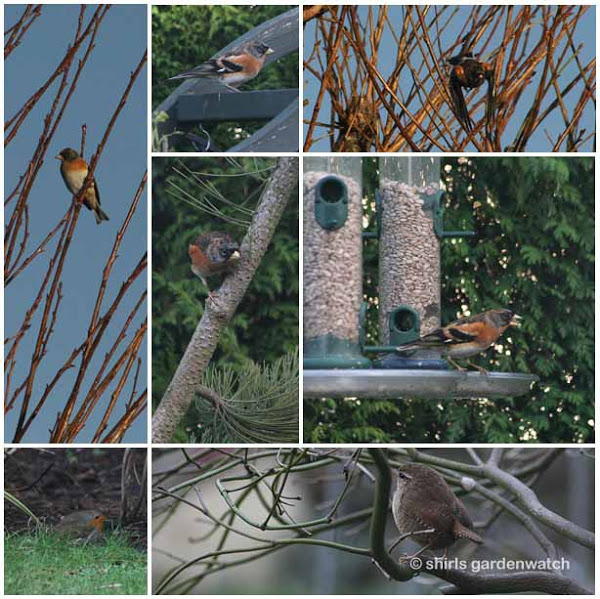 Also delighting me have been the Robins visiting just now and a Wren which is becoming a regular at my small rockpool pond. The Wren is becoming quite comfortable with me going out and in my back door too which is brilliant.

Capturing photos and video in this area at this time of year is tricky with low light levels (bit grainy). However, back on Friday the 13th the male Brambling stayed quite a while over lunchtime allowing me time to get my video camera out…

Male Chaffinches were on the feeder behind the Brambling giving a good comparison between it and the Brambling. Other finches that are visiting my garden just now include Goldfinches, Siskins and Greenfinches.

Now, although the Sparrowhawk visits suggest a healthy bird population I do hope it keeps away during my hour count for the RSPB Big Garden Birdwatch at the end of the month. As well as my request for it not to attend this event I’d like to invite the Wren and Brambling to join my other usual suspects to be included in my count. Yes, I know, wishful thinking 🙂

Mmm… the bird population of my garden (and many others too I’ve heard) seem to be wise to this count and make themselves very scarce… I wonder why that is. I’m thinking more feeders get filled and hung up at this time so the birds are either spoilt for choice or suspicious of the increase in food supplies and stay away. What do others think?

Finally, a very happy GBBD to Carol and all the bloggers joining her with posts sharing what’s blooming in the garden on the 15th of the month – albeit belated wishes here in the UK as I post past midnight. Yawn… time to select publish post I think 🙂

This post was written by Shirley at shirls gardenwatch in January 2012.