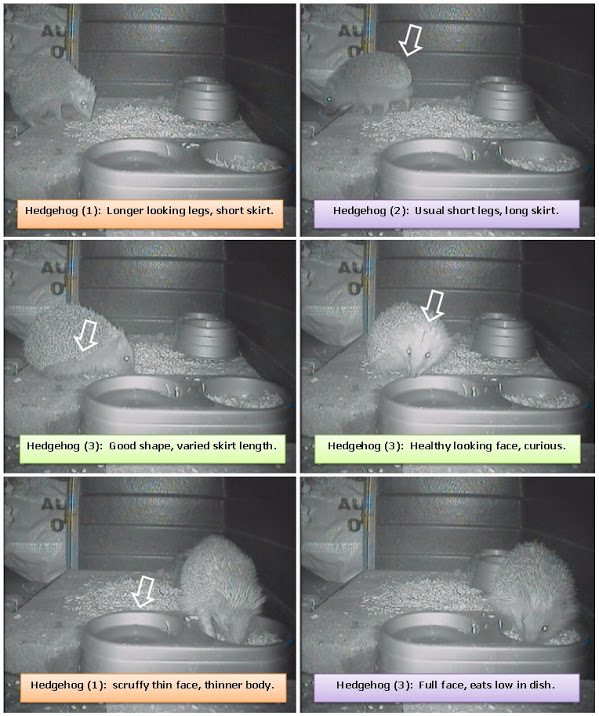 The good news is that the current survey at Hedgehog Street has received 46 hedgehog sightings from my garden since March 2nd. That’s just the ones I see Live too. Without a doubt the real number will be higher. If you see hedgehog visitors in your garden, outside your garden, alive or dead the The British Hedgehog Preservation Society and the People’s Trust for Endangered Species would love to hear about them for their survey.

When watching my garden hedgehog feeding station I take photos and sometimes video. For those not familiar with my set up I have an IR camera installed in a single story, moulded plastic ex-guinea pig hutch. I put a paving slab on the base to make the height level with the entrance. It makes for easier cleaning too.

Every time I see a hedgehog visit my feeding station (where sunflower hearts, dried mealworms, crushed peanuts, sultanas/dried mixed fruit and a bowl of water will be found) I take a series of photos to help identify any distinctive markings so I can ID different hedgehogs. I find that fun.

At the end of March I took the photos below which accurately show that at least three hedgehogs were visiting at that time. You can read the way I identified them in the captions. You can also see that the previously mentioned, regular hedgehog, Bagman (1) was really pretty thin in comparison to the other two. This began to concern me as he ate and drank considerably more than other hedgehogs that visited.

After one night’s viewing in the feeding station (known as Hedgehog Manor) saw another hedgehog bully Bagman in to a corner I went out with a torch to get a better look at him. He was still in the corner and, as I suspected from looking at him via my camera, he had spines missing from around one side of his face. To my eyes, he didn’t look well at all. I had no hesitation at all next.

Quickly walking to my shed for a deep sided plastic box, some newspaper to cover the bottom, some hay and pair of thick gloves I returned to Hedgehog Manor where Bagman still waited in the corner. I lifted him, put him in my deep box then added some food and water. With another camera placed on the top edge of the box I could keep an eye on him for any signs of distress. Lid loosely on the box (leaving a gap for air) I went indoors to watch.

Bagman, as expected, had hidden under the hay. I watched. After some time he moved a little. He showed no signs of distress. It got late. After a final check on the box (which was at my back door out of any direct sunlight) to ensure that I was happy that this box wouldn’t be disturbed during the night (a few obstacles were put around it) I put all cameras off and went to bed.

Being fairly sure Bagman would be alive in the morning, my plan was to call the SSPCA then. Bagman was still looking unwell to me in the morning. I made the call giving details on the condition of Bagman and was told someone would be out later. This was not the first call about a hedgehog I had made to the SSPCA so I knew what to expect.

Knowing that a little heat underneath a sickly hedgehog would make a difference (until the SSPCA could care for it) I warmed up a hot water bottle/bag. The bag couldn’t be too warm as the hedgehog would just move off it and not benefit from the heat. I wrapped the bag in an old tea towel, then lifted Bagman and put the water bag underneath him. He stayed there until the SSPCA lady (Bev) arrived.

Gloves on, Bev lifted Bagman and had a first look at him. She agreed with me that he was a little on the thin side and that spines were missing but added that Hedgehogs do moult spines and that perhaps he was thin after hibernation – although I did say he had been feeding in my garden for almost a month. Bev put Bagman on the ground to see if he’d move. He did and she had to move quickly to pick him up again.

Gloves still on, Bev took a second look at Bagman and saw the greyish colouring of Bagman’s skin and suggested he might have a bad case of mites and she would take him to the wildlife centre where they would treat him. She also added that he might also have lungworm (through eating slugs) and it was likely that they would treat him for that just in case.

Bagman left to the care of the SSPCA in a pet carrier with a heated pad underneath him. I asked Bev if it was possible (should he get well again) that he could be returned to my garden. I had also asked this when I called the main SSPCA line earlier that morning and was given a Reference number that would identify Bagman in any enquiries I made. I was told it might be possible but once the hogs put on weight and mix outside in enclosures ID could be tricky.

Less than an hour later, I had a call from Bev who was out on the road again. I had shown her my feeding station and told her other hedgehogs had been visiting. Bev called to confirm that Bagman had mites and to tell me that I should disinfect my feeding station as mites could be in corners and edges and would infect and hedgehogs that came in to feed. She added it was good that my station was made of plastic as it could be wiped down.

Keeping bird feeders regularly cleaned to reduce the spread of disease in visiting birds I have mentioned many times. However, I never considered that a hedgehog feeding station might need cleaning too. Perhaps this should also be a regular job too.

Five days later, using the reference number I had been given, I called to ask how Bagman was getting on. Was he alive? Yes, he was. He was still eating well too. The news sounded positive. Bev had said it could be as long as 6 weeks before Bagman would be fit for release back into the wild.

Unfortunately this story doesn’t have a happy ending. I called the SSPCA last week (4 weeks after Bagman went there) to be told that sadly he had been put to sleep. He wasn’t putting on weight despite the fact that he was eating well (as I had seen in my garden). I didn’t enquire further on his final state of health before they made the decision to put him to sleep.

I am happy though, that Bagman died in the care of the SSPCA who did their best to bring him back to health. I am very happy that Bagman wasn’t out suffering poor health in the torrential rainy/hailstone days/nights we have had recently.

At this moment as I finish writing this post, it’s just after midnight and (genuinely) there is a possible new diner in Hedgehog Manor. I’ll study the photos I have just taken tomorrow when I’m more awake 🙂

The reality of nature is that wildlife of all kinds can live and will die in and around our gardens. Life goes on. However, our gardens can provide a valuable place of shelter and food for endangered species like the hedgehog and I feel privileged to be able to see and help them.

The photo below shows Bagman seen for the first time in my garden on March 2nd. My guess was that he was not long out of hibernation.

My apologies, for lack of postings and blog hopping recently. I’ve been out and about and have images cropped ready to share but time seems to be running away yet again. I’m guessing I’m not alone there. I’m never short on a story or too either. That’s me for tonight though – wishing you all a great weekend.

Gosh… are we really nearing the end of April? What has been keeping you busy this month?