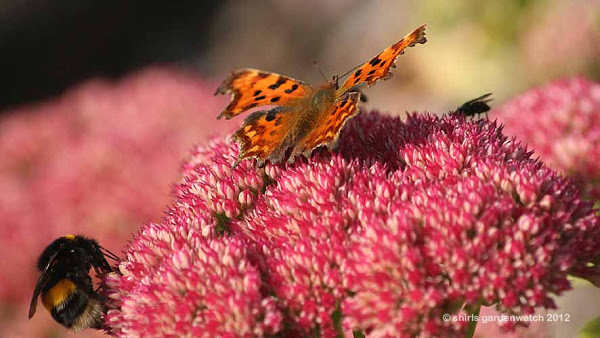 Spotted feeding on a Sedum a week ago, my cameras captured images and my books confirmed an ID to be the Comma Butterfly. I always love to see a new visitor to my garden. The interesting story on this species is that back in the 20th Century it was in serious decline and in recent years it has made a comeback.

Further to this, the Comma Butterfly here in the UK, is expanding its range and has been heading Northwards from Southern Britain up through Scotland for a few years now. What’s interesting about that is that back in 1870 it was in fact extinct in Scotland. It has been suggested that climate change may be a factor in bringing it to the cooler temps up my way.

The butterfly is moving north at between 12 and 15km a year, and in the last ten years has successfully colonised the Borders, all of the Lothians, Fife and the southern parts of Tayside, with recent sightings reported from Dundee and Pitlochry.

Butterfly Conservation said of the Comma back in 2011

Should the Comma Butterfly continue successfully breeding in Southern Scotland and continue moving northwards, by 2017 it should arrive in Inverness says Paul Kirkland, Director of Butterfly Conservation Scotland.  Lol… I wouldn’t think there is any need for Nessie to be worried 😉

Below you can see a short video captured on the sunny, Sunday evening of September the 23rd. I managed to get a nice close-up view which I was delighted about and I’ve added a longer view of this busy nectar bar at the end. Note there is gentle background music and you can choose an HD quality to view. The image below it is a video grab showing the distinctive white mark shaped like a comma. 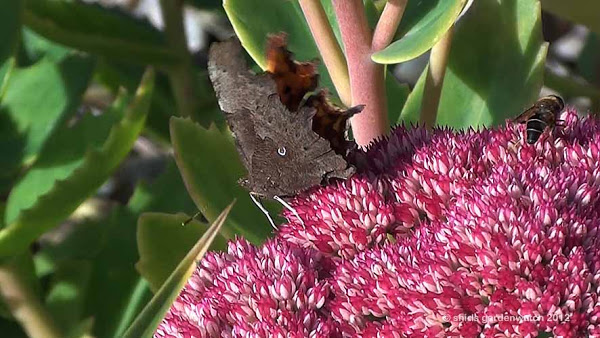 Although the common nettle is the most widely used food plant for the Comma butterfly, here in my garden just over the fence from my popular sedum planting I have the golden hop Humulus lupulus which is another possible food plant.

Perhaps it’s too late for this butterfly to stay long for this year as sightings are suggested to be from May to September but it’s certainly been fun to catch a glimpse of a new garden visitor and finding all about it. I love sharing a good story too 😀

This post was published by Shirley for shirls gardenwatch in September 2012.