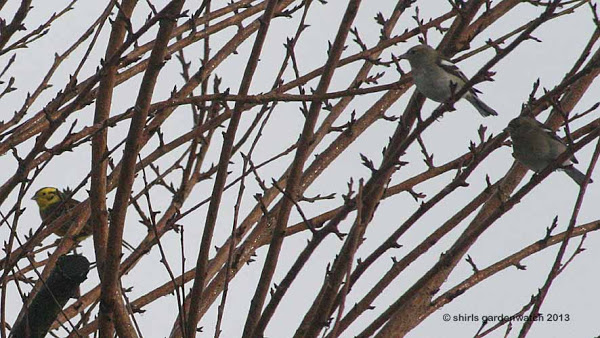 ‘unless something exciting visits the garden’ I said last time in relation to having a break from nature posts. Well, I’d say a Yellowhammer foraging for food right under my window just a metre away was an exciting sighting 😉

We had a return to snow and cold temps overnight and this brought large groups of Chaffinches to the feeders this morning. Often other birds will join/follow the Chaffinches like the Bramblings who were also seen today and the Reed Bunting visiting during this year’s Birdwatch count.

No ID books were required for the Yellowhammer today as this is a bird I look out for on our visits to the Visitor Centre observation window at SWT Loch of the Lowes. I’ve captured video and photos of it there although I don’t think I’ve posted them yet.

Above you can see the distinctive yellow head of the Yellowhammer but being truthful with so many Chaffinches I captured my grainy photo only because I saw it fly up there I could easily have missed it completely. Notice how much smaller its beak is to the Chaffinches. 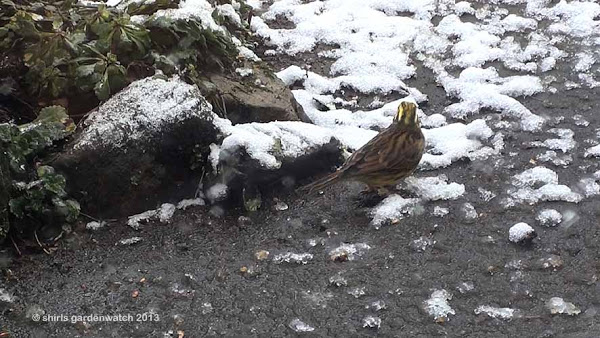 Above you can see that at first glance (from behind) the Yellowhammer could be mistaken for a male House Sparrow until you look a little more closely at the yellow markings on its head.

Below you can see the strong contrast between the yellow head and brown back of the Yellowhammer. The brown stripes on a yellow head are quite strong too. I wonder how long it wandered around under my window. There were Chaffinches feeding under my recently built snow shelter table – I wonder if the Yellowhammer fed with the Chaffinches there too? 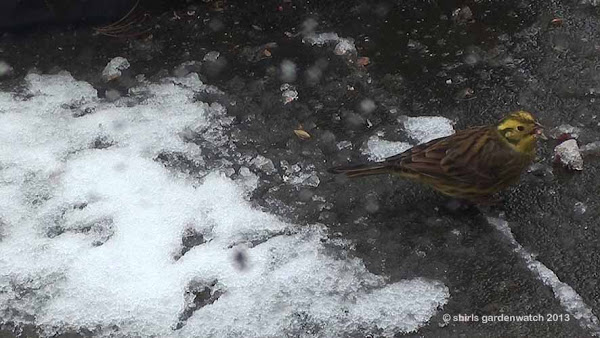 It’s not until you get such a close, front facing view that you see what a lovely sunshine yellow the Yellowhammer brought to my garden for a short while this morning. Wonderfully, a nearby white patch of snow reflected light and made the Yellowhammer shine even more. You can easily see why it was hard not to miss when I looked out my window. 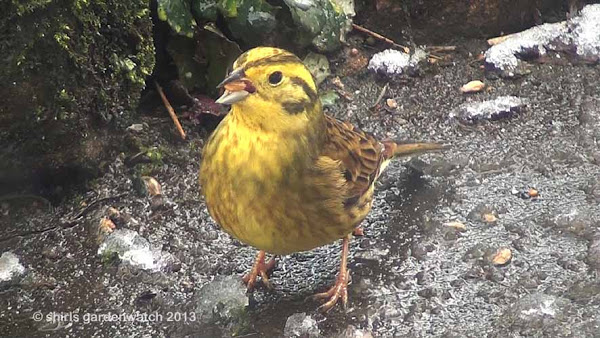 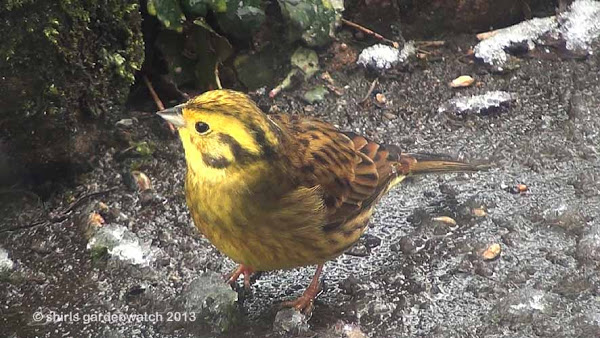 The ground photos shown above are all screen grabs from a small piece of video I managed to capture. Being truthful, I had no idea Yellowhammers could be seen in my area until I saw one on top of a wall near a Woodland a couple of years ago.

I never thought for one minute that a Yellowhammer would find its way my garden. On seeing them visit the feeders at Loch of the Lowes, I knew they were only seen on brief visits which makes my garden sighting all the more special. I’d like to share the video highlights…

I really am gobsmacked at the number of bird species I have seen in my small urban garden since I’ve been gardenwatching. Long may my garden surprise me… to date we have spotted 35 species! I wonder how many more we have missed 🙂

This post was published by Shirley for shirls gardenwatch in February 2013.

15 thoughts on “A Yellowhammer in the garden!”