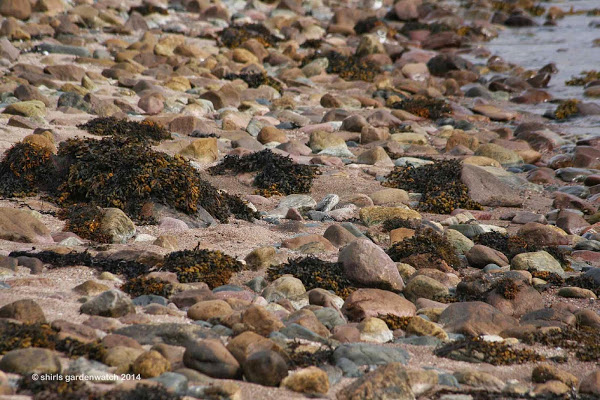 There’s no sign of a red and white striped shirt, bobble hat, or glasses in today’s challenge. Wally (or Waldo in the US & Canada) has competition from a small wading bird very well hidden along the pebble shoreline of Loch Ewe at Aultbea. This is the bird mentioned in my last blog that had me smiling and stumbling in a hurry to capture photos!

Wet pebbles and seaweed along this shoreline made for tricky walking at times. Too busy looking down at our feet we didn’t even notice the delightful small group of Ringed Plovers (possibly juveniles by their less distinct black collar) until we were upon them – and we got very close!

Having remembered the Little Ringed Plovers that captured everyone’s imagination when BBC Springwatch were at Pensthorpe National Park back in 2010 that was what I thought I was seeing! However, not being as familiar with wading birds as garden ones I didn’t realise there were two quite similar Plovers.

Where’s the Little Plover then? Let the challenge begin… can you spot it? Note some image files are larger so you have a sporting chance – just click on them 😉 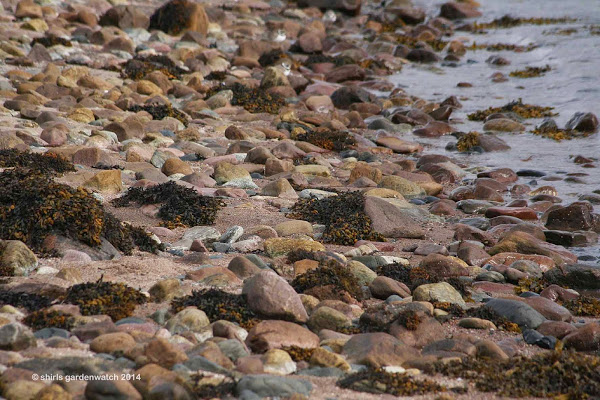 (2) Zooming out – can you see three Plovers now? I believe there’s a fourth 😉 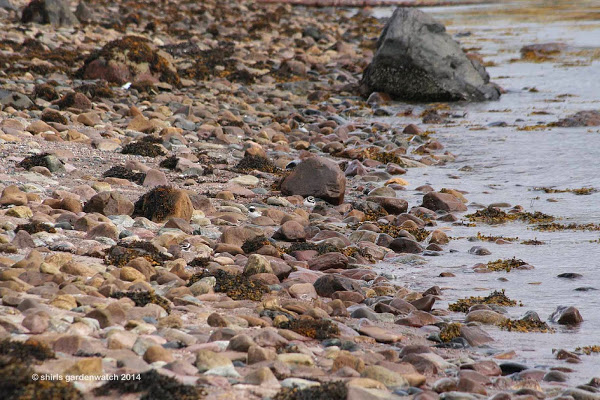 (3) A good challenge now (answer at post end) – there are five Plovers to spot! 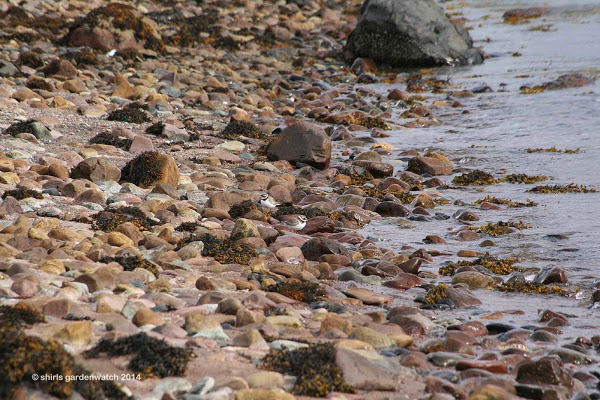 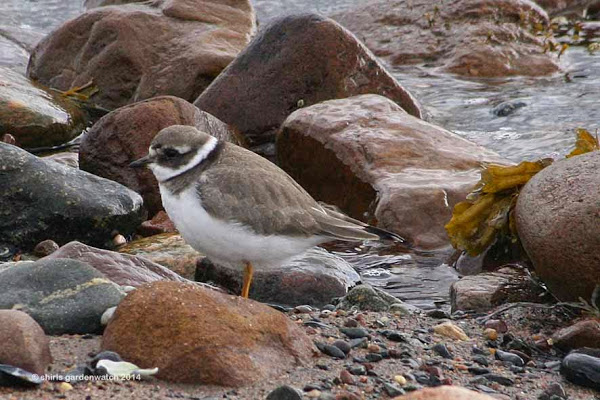 (5) This is what we are looking for – it’s brownish grey matches the pebbles. 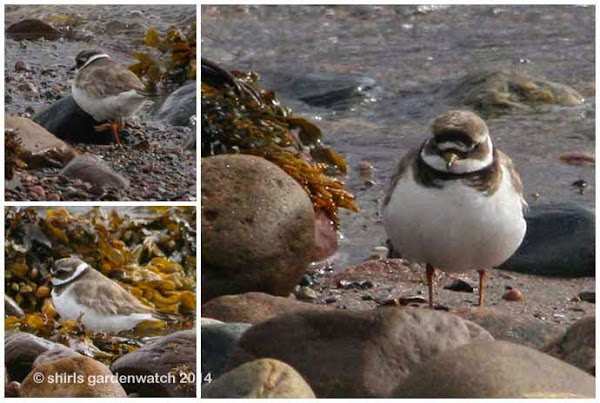 (6) Here’s some views from different angles to help you 🙂 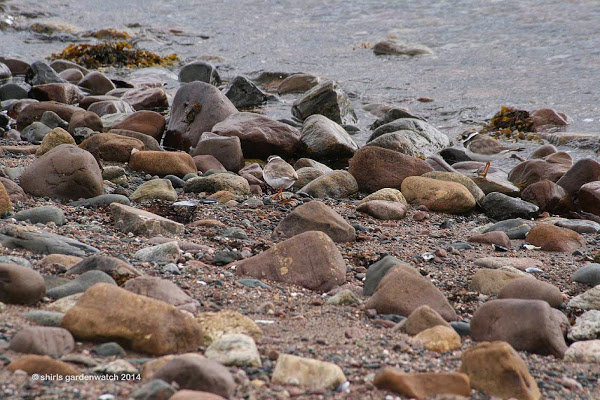 (7) Two Plovers this time – after the clues can you spot them more easily? 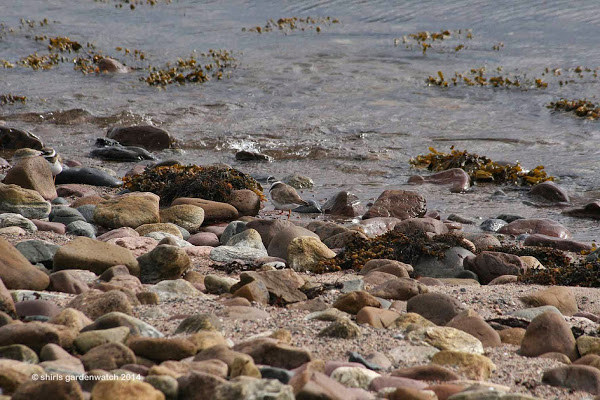 (8) Two Plovers again – have your eyes become used to seeing them now? 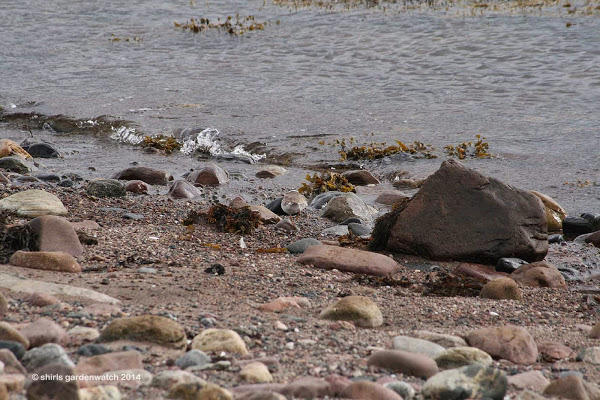 (9) So very well camouflaged as a pebble – only one Ringed Plover this time. 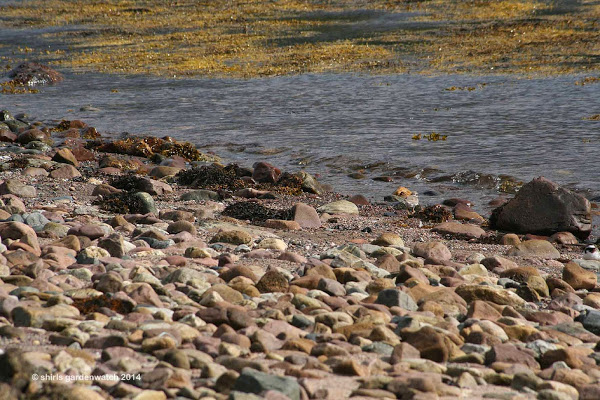 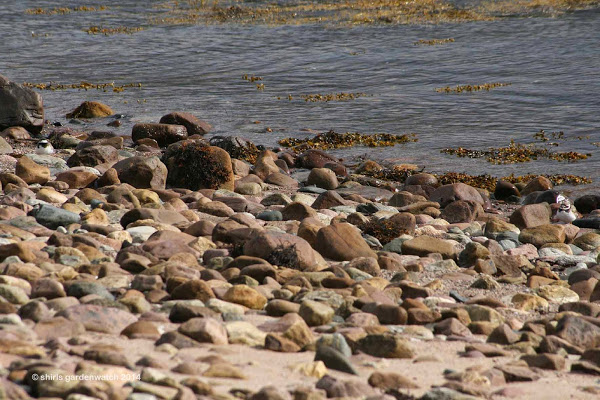 (11) Doubting myself now – could the sure two Plovers have a companion hiding?

So our snow predicated last weekend and so far this week has been pretty much a no show (all slush) allowing me time to indulge in some fun with this post on my first ever Ringed Plover sighting back in August. I hope you enjoyed the fun too – how did you get on?

Perhaps today we will see heavier snowfall and the newest little garden visitor I thought I spotted here might return. The snow does bring more garden visitors to the feeders. However, the winds have been wild and we don’t want blizzards on the roads for drivers. Wishing you all a safe weekend where ever you travel.

There’s a little more info from the RSPB on the Ringed Plover below and if you follow the link you’ll see a distribution map showing it as a resident around most of the coast of the UK and Ireland. Where’s the Ringed Plover… well if you know where to look you might just spot it 😉

”The ringed plover is a small, dumpy, short-legged wading bird. It is brownish grey above and whitish below. It has a orange bill, tipped with black, orange legs and a black-and-white pattern on its head and breast. In flight it shows a broad white wing-stripe. Breeds on beaches around the coast, but has also now breeding inland in sand and gravel pits and former industrial sites. Many UK birds live here all year round, but birds from Europe winter in Britain and birds from Greenland and Canada pass through on migration.”

Answers: Locations of the five Ringed Plovers in images (3) and (4).