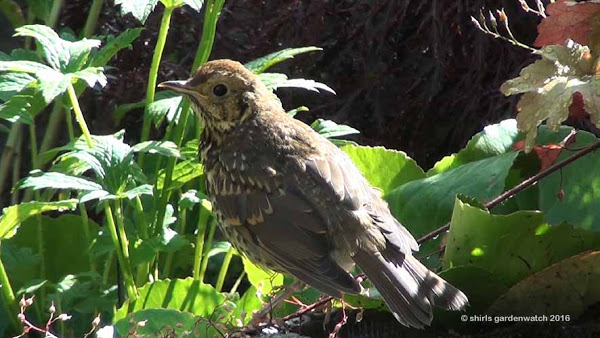 The year was 2013, the month July and what a boom of newly fledged chicks were to be seen visiting the garden then – so my handwritten blog diary tells me. At this time, exciting family stuff was going on and postings were few but the recording of photos, video and gardenwatching notes in my well-loved, hardback, A5 yearly diary continued.

As mentioned in comments in my previous post, the song thrush is in serious decline in many parts of the UK. So, it’s no surprise then that a possible first sighting of juvenile song thrush in my garden was exciting! But was that what I was seeing? I wasn’t sure.

Gardenwatching over nine years has taught me many things (forever learning) especially when it comes to identifying new garden visitors. Rushed record photos aren’t always clear enough for an ID. Yes, granted, videos (often shaky) help more but its observing the behaviour of the new visitor that usually clinches it. Juveniles always catch my eye (or ear if they are newly fledged and begging for food). The youngster below caught my eye. The image above is a screen grab from the first video below.

New visitors to garden, watch the activity of other birds before joining in.
Juveniles watch longer, look lost and are seen standing and walking over soft plant foliage. It’s fascinating watching them and wondering what they are thinking. The first video below shows this juvenile song thrush visitor standing on the edge of a birdbath. It moves on when a blackbird comes down to drink (bottom RH corner).

Having never seen a song thrush juvenile with or without parent feeding it in the garden its only guess work at what it has been fed. Guess work again re it perhaps never having seen a parent smash a snail shell to break in to get to food inside. That said, could this inexperienced youngster know already to look for snail shells? It might look so in this next video.

These adult song thrush images were taken back in October 2007 and have been included here for comparisons between an adult and a juvenile song thrush. Please note that there isn’t blue slug pellets in gravel, it was decorative pot dressing/grit that spilled over from a container.

At the time of this juvenile sighting, it was its shorter wings that caught my eye and the face looked slightly different too. On looking at these images further, I spotted that the adult has a pale defined eye ring. That helped a lot, should I see a juvenile again. It’s all these little details that have been fascinating to discover when gardenwatching. Being very much an observer of garden visitors, I enjoy this part.

For this blog post and descriptions on the appearance differences between the adult and juvenile song thrushes, I referred to my bookshelf and the few bird books I have collected over the last nine years. However it was a book bought, many years before and recently unearthed during an attic clearance that I have found a great resource recently.

A caption next to a small illustration of a juvenile Song Thrush in an old Reader’s Digest (Nature Lover’s Library) Field Guide to the Birds of Britain gave me the best clue by far. Next I searched through my photos and video screen grabs to illustrate this for my own records. Hopefully this will be of help to others wondering if they too have seen a juvenile song thrush.

Finally, there is another Song Thrush comparison that many people search for – I know I have. What’s the difference between the song thrush and the mistle thrush? Well, I was aware that the mistle thrush was larger and a bit greyer but that’s a bit vague so I went searching for a video and discovered a good one by the British Trust for Ornithology (BTO). I hope this of interest of others too.

Being fully aware that the song thrush is a shy bird as well as a rare one in some areas of the UK, Yorkshire for example where fellow blogger Sue is, I wanted to share my special sighting and images.

I would also like to share a theory by Dominic Couzens in ‘The Secret Life of Garden Birds’ that is currently on my bookshelf. He suggests that perhaps numbers are in decline due the young birds not finding food in the first two or three months after fledging. I do hope the youngster above did not fall into that category.

Wishing everyone reading this song thrush sightings in the future especially if you are not seeing them now. If you are seeing them, I hope you continue to do so. Hopefully there can be a turnaround in the decline of this species here in the UK. Fingers crossed.