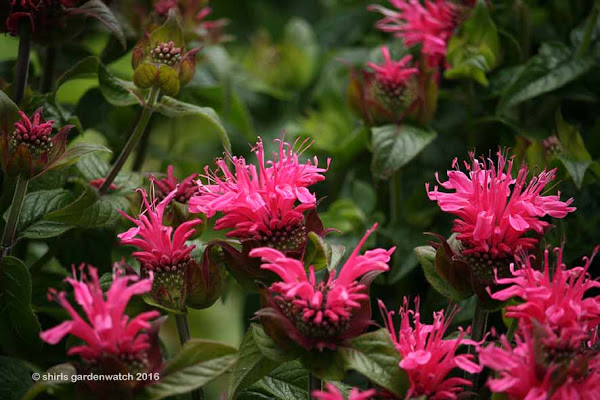 Today is the last day of #30DaysWild for June 2016. I’m celebrating it and a month of daily blog posts in a way I celebrate many events – with a plant purchase. My garden is full of memories when I look around it. A plant choice for pollinators ties in nicely with this month long challenge too.

This blogging event I definitely won’t forget in a hurry. It has been a time challenge that’s for sure. It’s been fun and interesting too. The impact of a block five of the same plant in a small border, viewed from my gardenwatch window, will be a great reminder. I’m looking forward to seeing and photographing many bees and butterflies feed on this plant 🙂

Monarda ‘Cranberry Lace’ I came across in a local garden centre today. I have always fancied growing a Monarda after seeing it in a Piet Oudolf garden (in huge swathes) many years ago. What drew me to this variety was the deep pink flowers, aromatic foliage and that it was only 12” high and had a spread of 16”. The suggestion that it had some resistance to mildew was a plus point too 🙂

With this Monarda plant, I’d also like to thank everyone who has followed my daily posts this month, especially Lisa at Greenbow in Indiana, USA and Sue at Our Plot at Green Lane Allotments in Yorkshire, UK for leaving comments so generously. I have really appreciated the time everyone has taken to visit with or without comments. Daily posts on a news feed must have been wearing you all down – I hope not too much 🙂

Throughout this blog marathon, it has been late evenings when I’ve decided what to write about. Most nights I have gone all the way to a couple of minutes to midnight, as I have tonight, often with a note saying photos or text still coming. I then updated in the wee small hours! I could have had the summary below all ready to go but I wasn’t sure how I wanted to end this series until I spotted the Monarda today – then I knew. It was the obvious way to do it when I thought about 🙂 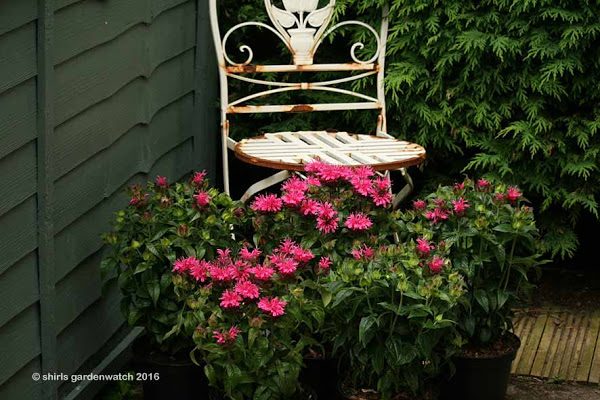 Thanks again, to everyone who has visited this month. You need read no further, have a rest – you’ve earned it! The summary below is for more for myself and anyone stumbling by. It’s also for other bloggers who may look in and haven’t seen this series. Now… what will I post about in July?

***********
Summary of posts for #30DaysWild during the month of June:
Week 1 began with an intro to the #30DaysWild Challenge and general update on garden visitors. Hedgehogs were visiting, seven Coal tit chicks were being fed in the camera nest box and the wildlife pond was busy with birds bathing. The weather was warm and dry.

Chat moved on to birdbaths needing cleaned and topped up, distracting Starlings away from the Coal tit nest, collecting material for a bug hotel, a Sunday morning bird count and video of the Coal tit chicks and checking on tadpole development & Large Red Damselflies that were spotted mating and laying eggs in the wildlife pond. Week 1 concluded with a wild flower, Foxes and Cubs.

Week 2 began with chat on growing more fragrant flowers in the garden. There was an update on the Coal tit chicks nearing fledging, a brief review of the pond plants and a short garden wander with a torch. Then it was back to a nest box watch pre fledging day and the wildlife pond with night photos and possible damselfly eggs. Week 2 concluded with the bonus of self-sown seedlings 🙂

Mature trees began Week 3, then a discussion on change of use on the bug hotel build. A more serious chat followed on neonics and bee friendly plants. Next up was a new visitor to the wildlife pond, a Blue-tailed Damselfly, the addition of a bird feeder seed tray and the answer to the feeder port drop mystery. A Bat survey and a night gardenwatch concluded week 3.

Week 4 was here before I knew it! Looking through my blog archive I can see at a glance that the wildlife pond has featured a lot. Planting to shelter froglets emerging from the wildlife pond (many weeks away yet) began the last week of June. It looks like July is shaping up to be an equally busy month with the wildlife pond.

Next, a night video capture of bats flying reflected in the wildlife pond was a bonus. Then it was the wildlife pond plant list, handy to have in one blog, a hedgehog creeping up behind me, garden images and insects by the pond and an update of images of the tadpoles. Nearing the end now, a bat photo capture and the successful storage of apples for feeding winter birds – still being used for Blackbirds, Song Thrushes and Starlings in June!

Finally, putting up a bee hotel preceded this post and the plant purchases (for pollinators) made today celebrating completing 30 daily posts in support of the Wildlife Trust’s 30 Days Wild campaign 🙂