Today I put up a couple of roosting pockets to keep some birds warm over the cold and windy days ahead. I have never tried this before so I am looking forward to seeing if they get used. I have sited them on my pergola, nestled amongst a sulphur heart ivy. The leaves of this ivy are a good size so I do not expect them to tangle their way into the pockets. 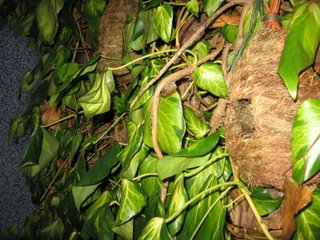 In early March this year we put up a nesting box for sparrows – it was a terrace of three, with each being self contained. Within a day, honestly it was quite a surprise, blue tits started showing interest. I have to point out here that although I have always enjoyed watching the birds in my garden this was a step up from filling a couple of small bird tables!

The blue tits continued to show interest although they were a bit prone to chasing prospective neighbours away. Nest building began. In the beginning it was clear there were at least two different blue tits busy building. I did hang up a basket, nesting egg, with nesting material nearby but don’t believe much was used. The result was that we had one hardy little blue tit building in all three! By the time May came it was quite clear that we had some chicks in the centre box, as food was spotted going in. I believe the chicks fled the nest during the first week in June but disappointingly we missed them go. I would take a guess at the five very young blue tits spotted at the feeders around this time came from our nesting box. 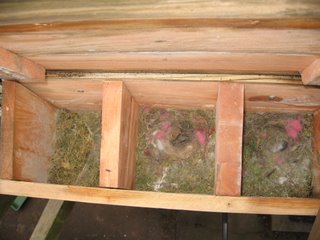 We have recently opened our nest box, as you will see above, in order to clean it out and prevent parasites from killing young next year. Should we be so lucky again? We only had a look with the intention of cleaning it out another day. Since then a young blue tit appears to be showing interest in the centre box!

Now, it’s not time to nest yet – so is our interested blue tit looking for shelter? Hence the roosting pockets. I have however chosen to site the pockets away from this nest box and the feeders, the question will be can he find them. It isn’t that cold here yet so I am confused as to what is going on. Suffice to say this weekend we get it cleaned out.

The robin is regarded as ‘the gardener’s friend’ as it follows you as you turn the soil – he is of course looking for worms and other tasty bites. He has followed me and perched above me on a pillar of my pergola singing his little heart out! Singing for his supper perhaps? There aren’t many earthworms to be had for him in my garden though, after I discovered New Zealand flatworms approx 10 years ago. 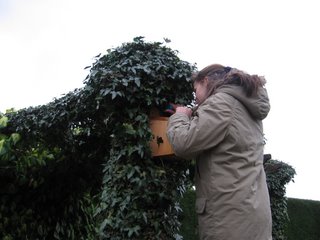 It would be lovely to have a robin nesting in our garden, I have never seen its young. Two weeks ago we put up a half-open nest box which is suited to robins and spotted flycatchers. We had to cut back a small leafed scrambling ivy to put the box on one of our pergola pillars. I plan to allow the ivy to regrow around the box for the safety of its prospective occupants. I wonder who will show interest………..

For more details on the New Zealand Flatworm see the links http://www.organicgardening.org.uk/factsheets/pc21.php and http://flatworm.csl.gov.uk/ .