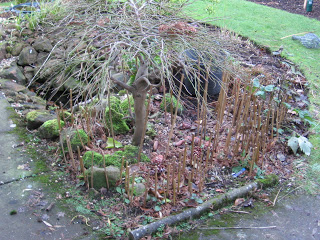 Today has been another wild, windy day with heavy rain showers. Disappointingly, I was unable to finish a tidy-up of the borders which I began yesterday. I did however tidy the border I look directly on to from this window and this morning it revealed a tiny visitor dashing across it – stopping at plants for cover. At first we thought it was a field mouse but a closer look identified it as a tiny wren. I got the video camera set up but the light wasn’t good and although I caught it on film it isn’t clear enough to show. I will be ready with the camera tomorrow.

In all honesty I have a slight pang of remorse for destroying this safe area of cover for the wren – now that I have seen it again. But the cats also used this area for cover, hiding there to pounce on unsuspecting birds.

Border, shown above, shows the method I used this summer to deter cats from sitting under my Acer to watch the birds – I hammered in the ground canes of various sizes around the border edges. This allowed the birds to pass through and made it more difficult for the cats to jump out – I’m sure they managed though. I also took a more drastic action, in pruning the lovely domed canopy of my palmatum dissectum Acer tree – now that hurt me!

My plan yesterday was to open up this area as much as I could – now putting my trust in technology to protect the birds. I have now had my ‘CATwatch’ unit placed for a few days now and I can say I have not seen any cats – but I am not at the window all day. I have removed all canes and pots – as the unit cannot detect through solid objects. In choosing the spot for my unit I walked around the area at night to see where the red sensor light picked up my movement. You can see the unit in the very top right hand corner of the photograph above. I expect I will need to check the sensors again throughout the year as the plant growth and density will change.

The photograph shown above was taken in my garden on January 10th 2007.