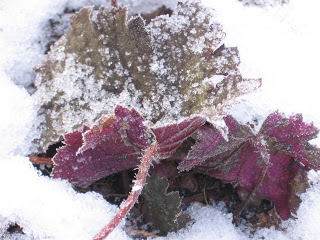 Overnight our garden covering of snow remained the same. It was still cold so as expected the snow frosted over. My footsteps gave a soft crunch as I walked around the garden with my camera this morning. I thought I’d like to capture the mood this morning – especially for those who have soaring temps! 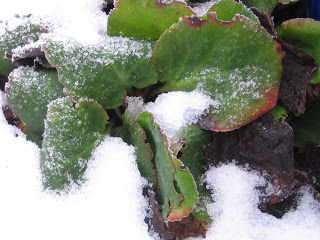 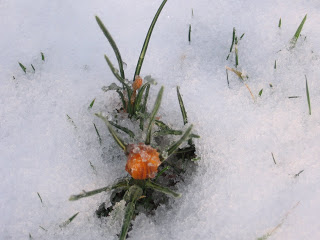 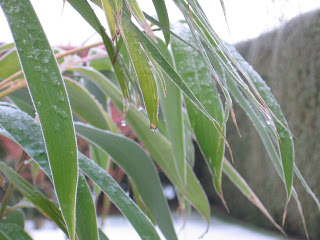 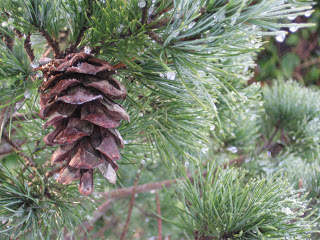 Plant names, from top to bottom are – Heuchera , Bergenia, Crocus, Bamboo and Pine tree. The morning sun was melting the frost on the tips of the plants as you can see above .

Plants from around the world make their way into our gardens. The sources for our indulgence in new plants, and latest varieties, range from friends to our local Nursery or Garden Centre, the exhibitors at Garden Shows and the Internet. Not all plants clearly can grow in all countries but I thought I’d take a look in my Garden Encyclopedia to see, out of interest, where the plants above growing in my Scottish Garden originated!

Heuchera – is from the rocky sites in North America, chiefly the Rocky Mountains, with a few from Mexico. I had no idea on that one – I’ll see it in a different light now.

Bergenia – is from meadows, rocky moorland, and moist woodland in Central and E. Asia. Again I had now idea that came from so far away. Although that one doesn’t surprise me as I do have a likeness for plants from China and Japan.

Crocus – is found in a wide range of habitats, including woodland, scrub and meadows, from coastal to subalpine areas in C. and S. Europe, N. Africa, the Middle East, C Asia, and W. China. Quite a little traveller is the crocus!

Bamboo – is found in forest and woodland in tropical and subtropical Africa, Asia, and Central and South America. Now, I knew this one was from Asia but I would never have associated it with Africa. This one was a Mother’s Day present a few years ago.

Pine tree – is found in forests of the N. hemisphere from the Artic Circle to Central America, North Africa and S. E. Asia. Now, I had no idea that this tree was so versatile! This one is a dwarf species, I cannot remember its name but it gave cones when it was a young tree. I love the structure of the Pine tree.

The photos, shown above, was taken in my garden on February 9th 2007.