Our Camera Nestbox was only up two days when we recorded our first visitors. The following pictures have been taken from captured video and give a good update of activity so far. Even though we do appear to have a pair of Blue Tits interested in our box, they visit together at least twice a day, there is no guarantee they will actually use it. 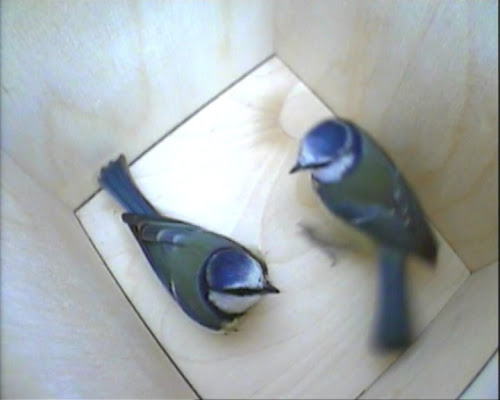 On March 3rd, shown above, we saw our first moving pictures within our box. Our pair of interested Blue Tits made their first appearance together and we were delighted to be watching when they arrived. Our Nestbox had only been up two days! To view this video click here 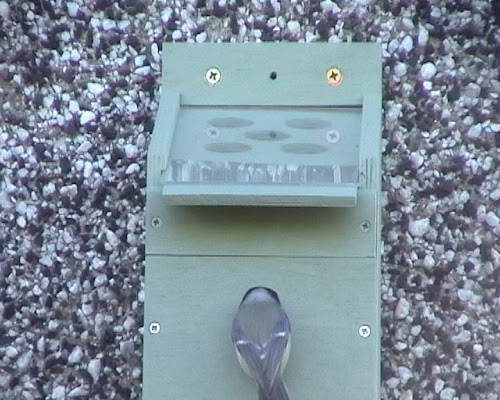 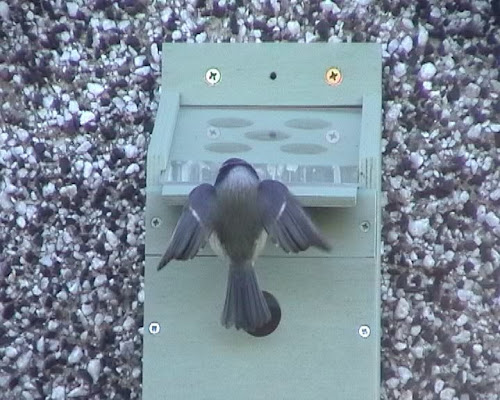 On March 7th, shown above, I had noticed the changes of light levels inside or box were being caused by a Blue Tit outside it pecking at the entrance. This appears to be the first stage of the birds showing interest in a Nestbox. I quickly set up my video camera outside and left in running and captured some very interesting film. The video showed that the Blue Tit would peck for a while then jump up to the edge of the roof and rest a little then would drop back down again to peck at the entrance. To view this video click here 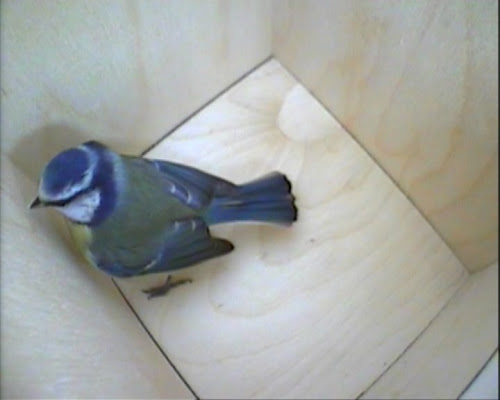 On March 11th, shown above, was when the inspections and testing of our Nestbox began. Tap, tap, tap on the floor and on the walls. The Blue Tit male began to visit more regularly and we began to wonder if it would do anything else but tap with its beak. It was to be another 13 days before we would see any change in this activity. To view this video click here 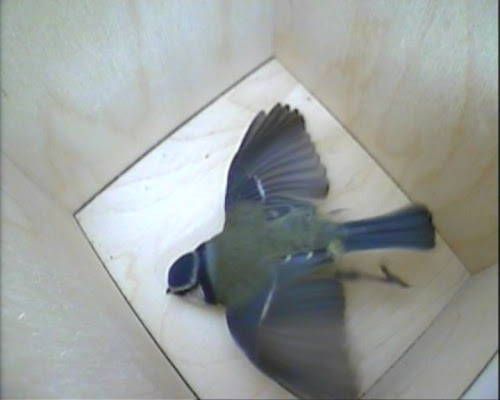 On March 24th, shown above, I had originally thought that the Blue Tit had slipped as the floor was too slippery. It got up, pecked a little more, then left. Some time later it visited again for its longest visit so far. Again, it was seen sliding on the floor but this time it did it a few times and I was convinced it looked deliberate! I looked into this and found that it was.

This Blue Tit was performing a shuffling action that will be used to push the nesting material into the corners and sides of the box to make it compact enough for a nest. When there is enough material it will form the cup of the nest where the eggs will be laid. I assumed the Blue Tit was wisely checking to see if there was enough space to do this. How clever. Without Cameras in Nestboxes we would never be able to see this.

After shuffling on the floor it then started pecking at the floor and walls again but this time it appeared a bit agitated. It left again and the next time we looked at the screen a few strands of moss had appeared in our box! Great we thought, it was finally going to start building. To view this video click here 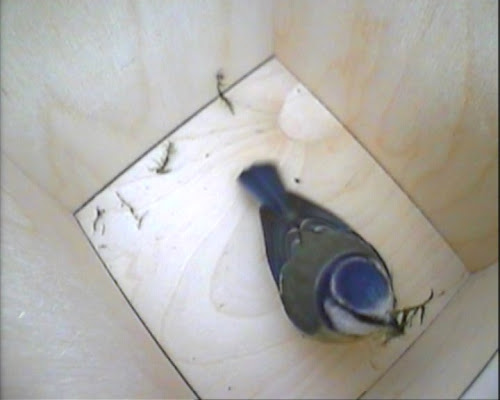 On March 26th, shown above, after only two days the Blue Tit had appeared to change its mind about the moss it had brought in and collected up a few bits and left with it in its beak! Now, that is what we assumed had happened – but could this have been another Blue Tit stealing the moss and trying a bit of sabotage? 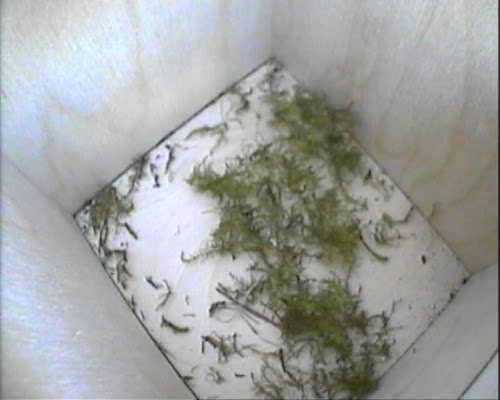 On March 31st, shown above, this the last day of March saw the first day of what looks like a nest being built in our Camera Nestbox. Before lunchtime there had been a lot of activity with nesting material being brought in then removed again. They were clearly a fussy pair. We were out for a few hours in the afternoon and came home to the picture above. Now that does look good quality fresh moss! I wonder now what picture we might have to show on the last day of April.