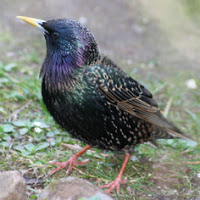 The Blue Tits nesting in our Camera Nestbox have rather dominated posts recently. I thought I would address this, on behalf of the other birds in my garden, by doing a bird count over this weekend as activity in my garden has increased recently.

The results below were taken on Saturday between 8.30-9.30am. Top of the count was the Starling.

Starlings have dramatically increased in numbers in the last 10 days or so. They are coming to the feeders in packs and are messily tossing food about as they eat. The smaller birds wait about and sometimes join them. The Woodpigeon gets quite aggressive when they feed near it. 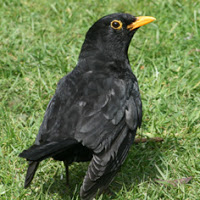 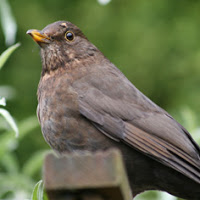 Blackbirds have visited my garden in good numbers for some time now. They are seen and heard most early in the morning – although they do visit throughout the day and are one of the last birds to be seen before dusk.

The pictures shown above are of a Blackbird male, top, and a juvenile. There were five males, one female and a juvenile in my count. The mystery surrounding the unusually large amount of sunflower hearts being eaten at the moment was solved when I did my count.

I watched the male blackbirds go away with beakfuls of up to five sunflower hearts and I saw one feeding a juvenile with them. The young juveniles are quite plump and brown and almost the same size as the male. They wait about the ground near the feeders. Between them and the recent invasion of starlings I will need to restock my supplies a week earlier than usual. 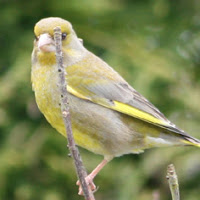 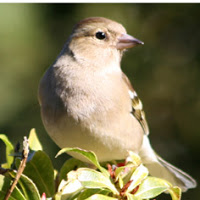 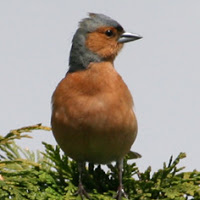 Finches are popular in my garden but not all were seen for my count. We have not seen any Siskins since my post on March 21st. We had about eight visiting then – as one was sick I slowed up a little on filling the feeders and off they all went! All the finches appear to be sociable visiting in large groups together or mixed. Goldfinches too were missing from my count but they are still visiting my garden – the most I have ever counted of them has been 19! 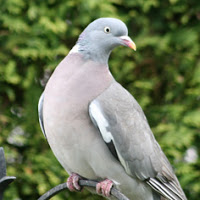 I’ll be honest when I say that I find myself opening in window and clapping my hands to scare off the woodpigeons when they are at the feeders in numbers. I did do this during my count quite a few times. The smaller birds don’t always move away when I do this. I don’t mind the odd woodpigeon strolling around the ground and feeding there – as long as they don’t damage plants! Sorry, I shouldn’t be selective I know. 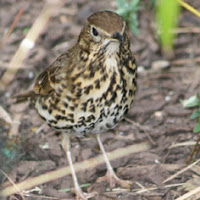 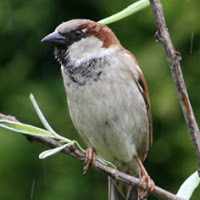 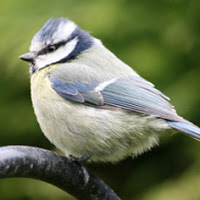 House Sparrows, middle, come and go. Often there is a solitary one or two then a larger group will come along of about ten. I am seeing more males at the feeders at the moment. The largest numbers I have seen of House Sparrows was last October where we had to count visually in groups of tens – there were over 80! It was quite a sight when they were disturbed and all flew off together.

Blue Tit, bottom, numbers have decreased since our pair began nesting. Our male is often seen chasing off the competition as he did during my count. The photo above is of him sitting on his favourite perch. 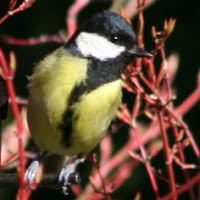 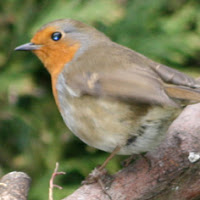 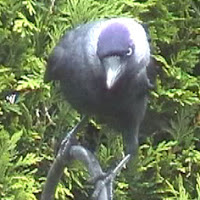 Great Tit, top, was seen only briefly as our Blue Tit male chased him too. He did take a sunflower heart away with him and attempted to eat it on another tree but our sleuth male chased him from there too! What a handsome bird this is though – isn’t it?

Robins, middle, are back visiting my garden once more – they seemed to have a spell away. They are often seen chasing off the Dunnocks – although not in this count. I don’t have a photo of the Dunnock yet – it moves about the ground around plants.

Jackdaws, bottom, have begun to visit my bird table taking its favourite nibble – the peanuts! It has the same problem as the Woodpigeon at the table as its size makes it a bit difficult to get in. It does manage though. It also gets the open window and clapping of hands treatment! 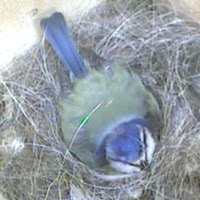 Finally, this bird count could be complete without mentioning our nesting female Blue Tit in our Camera Nestbox. All has gone quiet in the Nestbox at the moment – perhaps next weekend we will have some eggs hatched!! For most of the count she remained inside the Nestbox incubating her eggs. She did pop out briefly at one point and returned again.

All photographs above were taken in my garden.