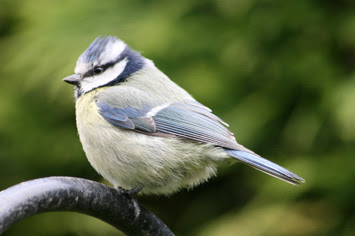 I am aware that perhaps I have given the male Blue Tit, of the pair nesting in our Camera Nestbox, a bad name. Yes I have not seen him visit the female often in the box – when she was making the nest and laying her eight eggs. However he is seen in the garden on perches, tree branches and at the feeders.

He waits and watches for her, as you can see above. I am now considering that he is on guard duty for her. Perhaps he has more of a guardian role at the moment. I have noticed he is very close by when she is on the ground.

He reminds her to eat perhaps – I have considered this too. Maybe she loses her appetite after a while. I say this as when she is outside she flies to him where she will wait and he brings food to her – sometimes twice. He then leaves and flies up to the tree above. She will then go to the feeders herself for a while then fly up to the tree – I assume to join him for a while.

A Caterpillar has been brought in to feed the female but today, as I began to write about him, he brought her something else. It was difficult to see at first but I do believe he brought her a lovely Spider. After eating it she left the nest and is still out now – almost an hour later. I have to be honest and say I am always happy to see her back in the nest again. I would hate anything to happen to her now after she has put so much effort into getting this far.

The photograph above was taken in my garden on 9th February, 2007.