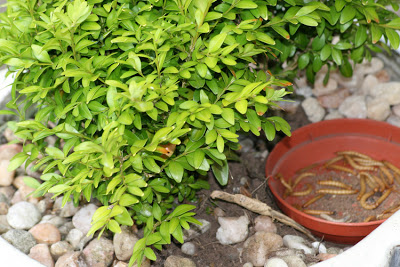 The Blue Tit parents of our Camera Nestbox chicks appear to be finding it difficult to find caterpillars to feed their chicks. They are bringing in spiders and other bugs but they have also resorted to bringing in pieces of fat cake and sunflower hearts. I have tried to help them by putting out live mealworms – hiding them in places where I have seen them search for food. This morning it is windy and cold too so the parents will be aware they must feed them lots but the female will probably also need to spend some time sitting in the nest to keep them warm – so they will both need to work hard today!

Yesterday, we had a worry for one of the chicks. As we watched the female as she brought in a sunflower heart. She did appear to soften it first on the branch of a tree. She stood looking over her brood and to our horror put the whole heart in the mouth of one of the smaller chicks. She then left. She has done this before but this time the chick remained with its mouth open. The heart was stuck. Soon after, fortunately, she returned and looked at them all. We were talking to the screen telling her to take it out! She finally saw there was a problem and removed the heart then left again – but the mouth remained open. We were having difficulty seeing why. She then returned again and appeared to check on the chick. She then removed a very thin skin of the heart allowing the poor chick to finally close its mouth! Thank goodness – how clever she was to keep checking though. My next thought was how this reminded me of a visit to the Dentist and how sore the chick’s muscles must be after holding its mouth open for so long!

Hiding Mealworms has not exactly been successful as you will read below, but I am and will continue to keep trying. The problem is that the Blue Tit has to recognise them as a food.

The pot above is at the moment right under my window – beside the ledge that spiders can be found. The Blackbirds found these ones and still keep coming back to see if there are more! Their search is vain there now. I also hid this dish on the ground behind another pot but……. the blackbird found them too. So I won’t try these places again. 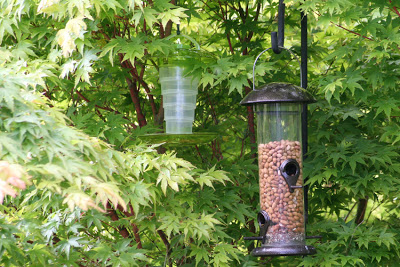 The hanger above, as you can see, is beside a peanut feeder hanging in an Acer tree. This is a popular feeder for all the Tit family and the Chaffinches. I didn’t notice if any were taken from this feeder but…… this morning it was lying on the ground below. It was lightweight and today is windy so I will go out refill it and secure it more thoroughly to give it another try. 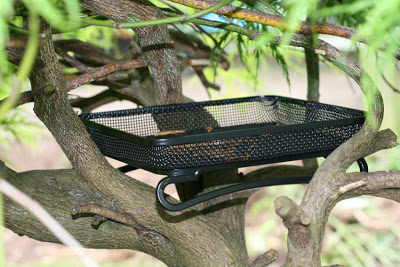 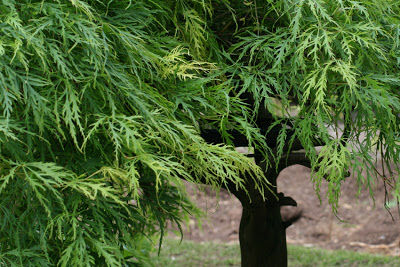 The secret feeder above was the one I was most confident of. My small domed Acer tree has a small ground feeder underneath it. When the Blue Tits search on the ground for food they will often take it quickly away and jump up at speed into the inside crown of this tree. They will eat there in a little more safety. The way the branches grow out in the crown is the perfect framework to hold another small ground feeder. I put live mealworms there. They disappeared very quickly but I wasn’t confident it was the Blue Tit that had taken them. I suspected the Blackbirds had been watching me – as they often do! 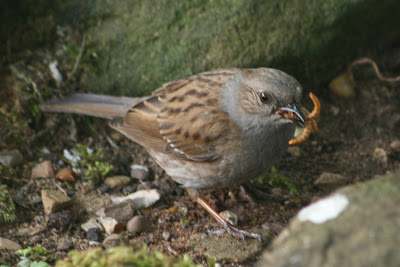 I should have guessed that a bird that would mostly feed on the ground would find and really enjoy live mealworms. I would describe the bird shown above as an explorer as it skirts around the undergrowth of my plants. It is about the size of a Robin and I have often seen a Robin chase it around the garden and into flight. It is also quite timid and I have had difficulty getting a photo of it – so I am thrilled to get one on camera.

If you haven’t recognised the bird above it is a Dunnock. But, as you can, see it really likes the mealworms and one is not enough. This was not its first visit! I put some on the ground below the secret feeder, a couple on the ground tray and a few on the ground. It firstly found the tray ones and gingerly took one away. It then came back and took two away – that was the tray empty! It then returned and searched the ground and found some more. It must have thought he had struck gold. So again, more beakfuls of mealworms were taken away until the final trip on the ground that is shown above – he is getting greedy now! The ground was now cleared of mealworms.

I will be honest here and say that I opened my window to chase it away a few times and for once it was not timid! I thought that would be all he would get and the others were safe – silly me. On its next visit I got the biggest surprise as it jumped up right up to the secret feeder. How did it know it was there? Could it smell the worms? Well that was that. After a few visits it had cleared the lot! I will try this feeder again though but I won’t put any on the ground this time. This feeder still has sunflower hearts and I also plan to put a little of the fat cake there too. If the Blue Tit gets there in time perhaps by association it might just see the mealworms as food. 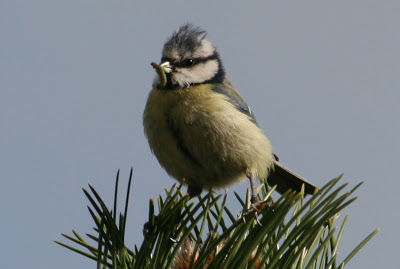 A ladder could be called for today. Looking out my window I have just though of another place I could try to hide live mealworms. I have just spotted the female resting on the very top of my small pine tree. It is opposite the entrance to the Nestbox. Perhaps this is a place I could try leaving some.

The photo above was taken yesterday of the male Blue Tit with a grub of some sort to take in to the chicks.