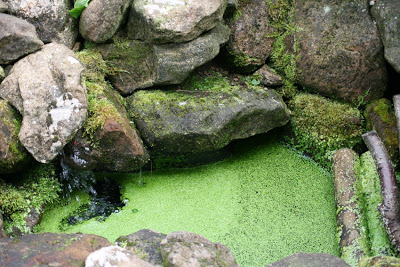 Sorry I couldn’t resist the title. Ponds large and small can have duck weed as a problem. A chat with the owner of an aquatic nursery, last weekend, confirmed that I had this in my small pond. Duck weed is a tiny floating weed that in its thousands makes a light green carpet on the surface of the water as you will see in the photo below.

The solution was as I thought too – a small fishing net! So, yesterday I went fishin’ and scooped up most, but not all, of the duck weed as you can see in the photo below. I decided I would come back to it again today to scoop some more out as that would allow it time to settle to the edges once again. A warning here though if you think that sorts it completely– you only need to leave one tiny piece and the plant will once again it will multiply.

So the chances of completely removing this from your pond are really slim. So it is more a case of control – regularly fishin’ to remove it is not really all that time consuming or strenuous in a small pond. The duck weed itself does not do any harm to the water – in fact the aquatic nursery owner told me that actually did some good by taking nitrogen away. 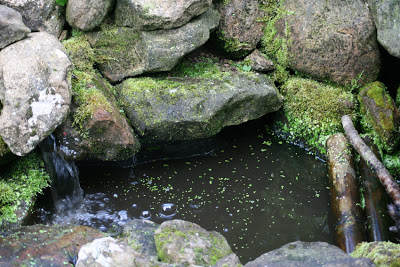 Emptying the pond ‘would that not work?’ I hear you ask. Well, for a while perhaps and so would washing the roots of any new aquatic plants to make sure you don’t add it yourself. However, it can also be brought in on the feet of water fowl, in the case of large ponds, or by garden birds visiting small ponds or water features. That’s where the common name ‘duck weed’ comes from. I have also had this problem in the past, many years ago, and I did try emptying my pond and I can say from experience I did not successfully succeed in removing it completely.

My pond is small although my photos perhaps make it look more like a small water feature. In April 2006 I had a pond liner doubled up but the water levels kept dropping and when I discovered a tear I decided to rebuild it. I then used a moulded plastic kidney shaped pond, with shelves at the sides for placing plants in baskets. I had one in another part of the garden so decided to move it. I took a bit of time and patience to rebuild it but I love working with stone so I didn’t mind.

My plan was to rebuild the area around the pond with hidden caves both under the surface and all along one side. I have always hoped frogs would hop into my pond so got quite a surprise to find a toad when I was emptying it! I don’t know who got the bigger fright! I put the toad in some of the old pond water in a bucket with a lot of rocks in and on top. I had no idea if it would stay there. I must have scooped it up with the water as I don’t remember catching it. I thoroughly enjoyed building my network of caves and the pond shelves were very useful in supporting some of the rocks in the water. I also built caves out of the water in the hope a wren would consider nesting there but I have only seen a field mouse passing in and out these caves so far.

I placed two small pieces of wooden support poles across the width to act as a bridge for the birds to drink from and for the toad and any frogs to get out – I have enjoyed seeing the birds use this. The rocks I used are sandstone – I had them in other parts of the garden. Yes, I know perhaps not an ideal stone in the long term but by that time I will probably revamp the area anyway. What the sandstone in this area does give is beautiful mosses, as you will see in the remaining photos below. 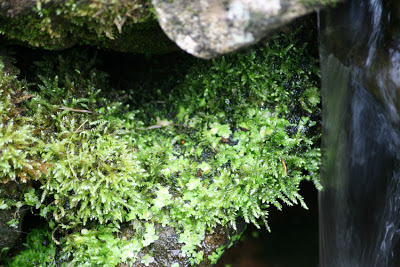 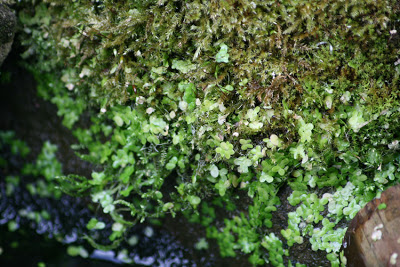 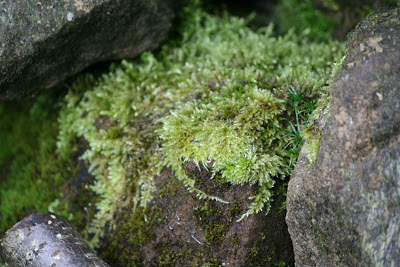 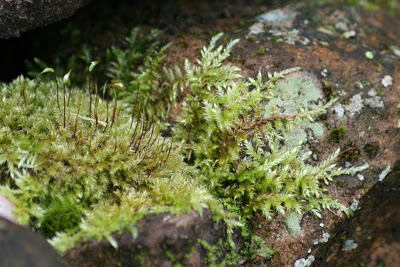 I love these mossy rocks around the pond and only this morning watched a Dunnock bounce around the rocks and take insects from it. This moss was also used by our Camera Nestbox Blue Tit female to build her nest. At the moment I love to see the beautiful natural patterns this moss is making as it grows on the sandstone. However, if you look closely at the photos below you will see the duckweed has clung to the moss too. So it is the duckweed or the moss. The moss wins hands down – now I will just have to live with fishing the duckweed out from time to time.

What about the toad? Well, the pond change was made two years ago and at the time it remained in the bucket until I was able to return it into the pond later that day. I was able to do that as I had enough rain water collected to refill my pond. I also added some of the dirty water from the bucket as that gave the pond back the living organisms that were already living there. In February I cleaned the pond once more, removing dead leaves from the bottom as they were causing the surface to look oily. No sign of the toad then at all.

Last night as I put food out for the hedgehog I looked across at the pond and saw how low the level had dropped as it does when we have dry spells. I filled my watering can a few times, this time direct from outside tape as it was only a top up, and without the rose power washed the logs to remove more of the duck weed. Then once again I got a fright as two legs pushed themselves from the edge beside the logs – our toad also got a power shower! Of course I have no idea if it is the same one or there has been a family of toads in my pond. I am just thrilled that my pond/pool has wildlife using it as it was built especially for it!

The photos above were taken in my garden on September12th 2007.