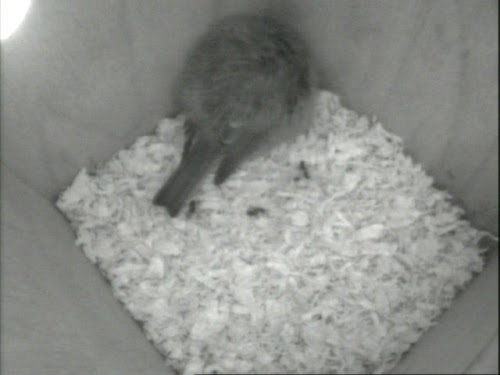 Three weeks ago today we took down our Camera Nestbox, cleaned it and scattered some wood shavings on the floor. We were hoping that we might get birds roosting in our box over the cold nights ahead. Let’s hope our camera survives the cold temps in our area of Scotland as tonight our Nestbox actually has a Blue Tit roosting in it!

The photo above was taken at 10.45pm tonight – briefly lit by torchlight!
The temp gauge in the car read 6 deg C.
You can read all about how we prepared our Nestbox for roosters here . This is our second year to have a Nestbox in the garden over winter and this is the first winter for our Camera Nestbox.

Tap, tap, tap came through the PC speakers tonight at 4.40pm. It was my daughter, who had just switched on the PC, who heard it. Fortunately she remembered hearing this through the Camera Nestbox earlier this year and looked in on it to see a bird in the box! She quickly hit the record button and captured the clip you can see below. How lovely to see a bird in our Nestbox once more – I wonder if it is one of our nesting pair that used it earlier this year.

Time for bed, video 0:44 with background music, try 480p quality.
We both watched the screen to see the Blue Tit move around one of the corners in the Nestbox. It was getting darker and the light inside the box was fading – our box is only lit by natural daylight.

The first set of photos, shown below, was how our nestbox looked to us with the Blue Tit moving a piece of wood shaving in its beak and finally getting comfortable in the corner where it tucked in its head ready to sleep over in our Nestbox. How great to see this activity again. If you are considering cleaning your nestbox this is the the advice that the RSPB give on doing it.

In the second set of photos I altered the light contrasts so you could see it more clearly. The Blue Tit has been moving about since these photos were taken and appears to have also used the box as a toilet too – although I will need daylight to confirm this! That didn’t happen with sleep overs in the Spring. 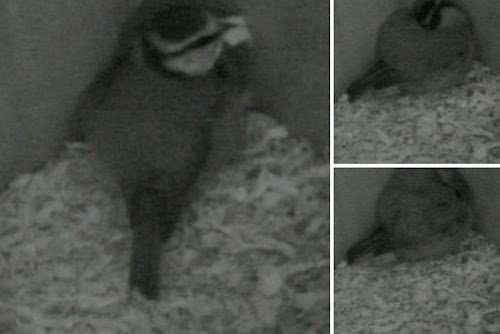 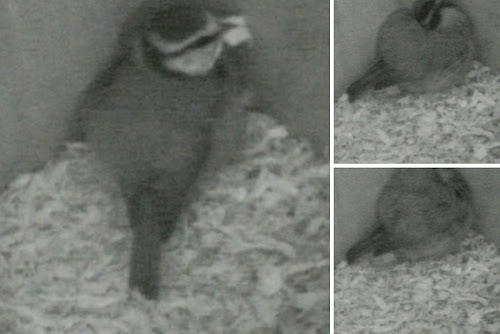 I did say above that this was the second year we have had a Nestbox over winter. Last year we had a Terrace Nestbox – designed especially for House Sparrows as they are happy to nest in communities. However in Spring 2006 it was a Blue Tit that made nests and had young from it. Unfortunately that box suffered water damage and we replaced it this Spring with another of the same kind.

It is very doubtful that the Terrace Nestbox had any Roosters last winter. However the replacement was occupied this year – but we weren’t happy at all with these residents – wasps! As this Nestbox is sited on the wall above our back door we had to destroy the nest which you can see in the photo below. 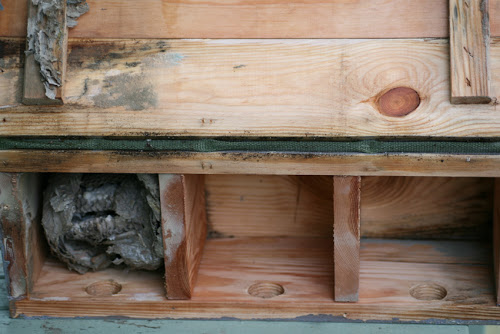 Three weeks ago we also cleaned out this Nestbox but it took a few days dry out and now has wood shavings in it too. I wonder if we might get roosters in this Nestbox – no camera there though!

Last November I also put up three roosting pockets on the ivy clad trellis of my pergola. I have no idea if they were used but I have to say I have been noticing small birds passing through this area recently and one day I did spot a tiny wren!

I did set up my video camera, outside on my tripod, but didn’t catch any activity at the pockets. However I also spotted two wrens together on the branches of my small Acer at my back door so I wonder if they will spend the winter in my garden somewhere. I will keep an eye out for them. 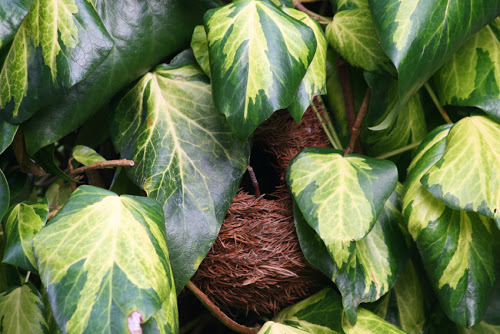 All Camera Nestbox photos shown above were taken in my garden on October 29th 2007.